(ORDO NEWS) — Jupiter’s moon Europa has a crust of ice that covers the vast world’s oceans. The rocky layer below it can be hot enough to awaken submarine volcanoes.

New research and computer simulations show that volcanic activity has been and may still be on the seabed of Jupiter’s moon Europa in the recent past. NASA’s upcoming Europa Clipper mission, aimed at launch in 2024, will approach the icy moon and collect measurements that could shed light on these results.

Scientists have strong evidence that there is a huge ocean between the ice crust and the rocky depths of Europe. New work shows how the moon can have enough internal heat to partially melt rocky layers – a process that can fuel volcanoes on the ocean floor. Recent 3D simulations of how internal heat is produced and transmitted is the most detailed and thorough study of the effect of internal heating on the moon.

Volcanic activity in Europe has been the subject of debate for decades. By comparison, Jupiter’s moon Io is clearly volcanic. Hundreds of volcanoes there spew fountains of lava and eject volcanic gas and dust up to 400 kilometers – an activity that arises from the same internal heating caused by Jupiter’s pull. But Europa is farther than Io from its planet, so scientists wondered if the effect would be the same under the icy surface.

Scientists led by Marie Behounkova from Charles University in the Czech Republic predicted that volcanic activity is most likely near the poles of Europe – latitudes where the most heat is generated. They also studied how volcanic activity might have evolved over time. Long-lived energy sources provide more opportunities for the development of potential life.

Submarine volcanoes, if present, can provide power for hydrothermal systems like those that power life at the bottom of Earth’s oceans. On Earth, when seawater comes into contact with hot magma, chemical energy is generated as a result of the interaction. And it is the chemical energy of hydrothermal systems, not sunlight, that helps sustain life deep in the oceans. Volcanic activity on Europa’s seabed would be one way to maintain a potentially habitable environment in the moon’s ocean.

“Our results provide additional evidence that Europa’s underground ocean may be a suitable environment for life to emerge,” Behounkova said. “Europa is one of the rare planetary bodies that could sustain volcanic activity for billions of years, and possibly the only body outside of Earth that has large bodies of water and a long-lived source of energy.” 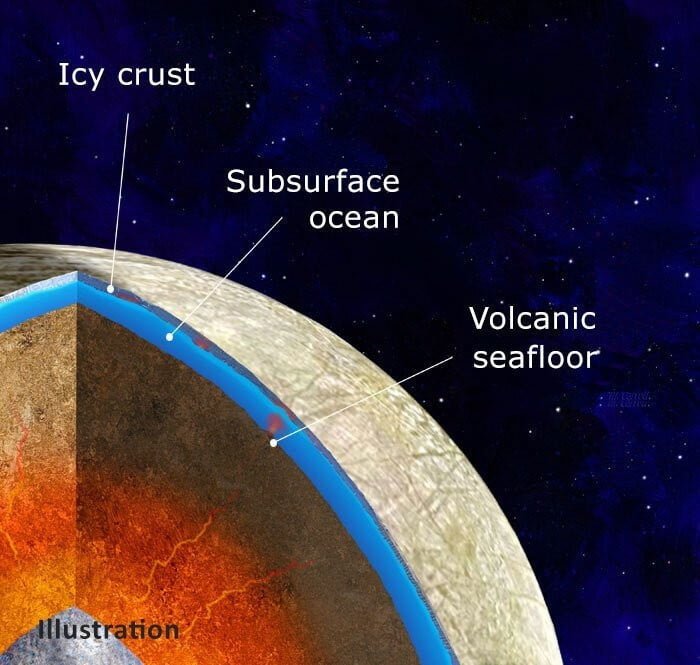 NASA scientists will have the opportunity to test predictions when the Europa Clipper hits the target in 2030. The spacecraft will revolve around Jupiter and make dozens of close orbital flights over Europa to map the moon and study its composition. The spacecraft will probe the surface in detail and take samples of the moon’s thin atmosphere.

Observations of the surface and atmosphere will give scientists the opportunity to learn more about the moon’s inner ocean if water seeps through the ice crust. Scientists believe that the exchange of substances between the ocean and the crust will leave traces of seawater on the surface. They also believe that the exchange can release gas and even jets of water vapor with ejected particles, which may contain materials coming from the seabed.

Europa Clipper will measure the moon’s gravity and magnetic field, anomalies in these areas, especially towards the poles, which will help confirm the volcanic activity predicted by the new study.