(ORDO NEWS) — “Spanning the dangerous line between the cosmic order and the terrible formlessness of beginningless time, the Pyramid was better perceived as a meeting place of life and light with death and darkness…”

Egypt was the cradle of civilization, allowing the same basic culture and language to flourish for nearly 3,000 years.

Even before the coming to power of the first pharaoh who unified the country, Narmer (also called Menes), there was an organized culture in the region that flourished along the Nile.

It may not have been a sophisticated pyramid building culture, as in ancient Egypt around 2600 BC, but it was advanced nonetheless.

The ancient Egyptian dynastic period is generally considered to have begun around 3100 BC. But even before that, between 9300 and 4000 BC, the Nile plain was inhabited by Neolithic peoples about whom we know very little.

What we do know is that this ancient culture, the civilization that would later give rise to Ancient Egypt, was a pre-Pharaonic people who built megaliths, intricate shires, and calendar circles that resembled mini stonehenges.

“…several behavioral indicators, combined with technological and ceremonial architecture such as calendar circles and shrines, suggests a level of sophistication far beyond what groups of shepherds have exhibited…”.

In the years after Narmer, Upper and Lower Egypt grew together, and slowly, piece by piece, piece by piece, Ancient Egypt became the center of civilization as different rulers came to the throne.

But the real revolution took place around 2700 BC. Pharaoh Djoser ruled ancient Egypt, and during his reign a giant stone pyramid of the III dynasty appeared. Djoser erected the first pyramid and a monumental stone complex surrounded by a massive enclosing wall more than 1,600 meters long.

But the construction of the pyramids and the origin of Egypt’s most impressive pyramids can be traced back to the modest pit graves of the pre-dynastic period, covered with simple mounds of sand and gravel.

Shortly thereafter, at the very beginning of the 1st dynasty, around 2900 BC, the royal tombs were built – intricate adobe boxes set in the desert of Egypt and divided into several rooms, like houses.

The tombs became more and more complex, and although most of them were monumental in size, none of them could compare with the scale that suddenly arose during the reign of Djoser of the 3rd dynasty, around 2630-2611. BC.

The pyramid of Djoser heralded the beginning of the era of the pyramids in ancient Egypt, and the architect of the pharaoh Imhotep revolutionized ancient Egyptian architecture.

During the Old Kingdom, up until the First Intermediate Period around 2100 BC, the ancient Egyptians built incredible structures called pyramids for their god-kings in a 72-kilometer stretch of desert that stretched from Abu Rawash to the northwest. from Giza to Meidum in the south, at the foot of the Fayoum.

The exceptions are the pyramids of Djedefre and Sneferu.

The most massive pyramids of Egypt were erected during the life of only three generations: Pharaoh Sneferu, his son Khufu and grandson Khafre.

If Sneferu built a pyramid at Mayudma, which eventually collapsed, and two stone pyramids located at Dashur, then his pyramids contain more than 3.4 million cubic meters. m (124 million cubic feet) of stone.

Interestingly, all the other pyramids built by the Egyptian pharaohs, taken together, contain only 41 percent of the total mass of the pyramids erected by Snefer, Khufu and Khafre.

Although Menkaure, who built the third largest pyramid on the Giza plateau, still used massive stone blocks weighing several tons, the total mass of his pyramid was less than that of Djoser.

To build the Great Pyramid of Giza, which is believed to have been commissioned by Khufu, the builders used more than 2.3 million stone blocks.

The result was a pyramid, which for the next 3800 years remained the tallest structure built on Earth. The total weight of the Great Pyramid of Giza is estimated at about 6 million tons.

Researchers have calculated that 5.5 million tons of limestone, 8,000 tons of granite (brought from Aswan) and 500,000 tons of mortar were used to build the Great Pyramid.

This means that someone could have been a small child when the Step Pyramid of Djoser was completed and lived to see the construction of the Great Pyramid when ancient Egyptian pyramid building reached its peak.

During the reigns of Sneferu, Khufu and Khafre, the most massive pyramids the country had ever seen were built. The rulers of the 5th and 6th dynasties of ancient Egypt continued to build pyramids, but in size and complexity they were incomparable with the structures built during the fifth dynasty.

During the First Intermediate Period, Egypt almost forgot about building the pyramids. But this phenomenon did not stop, although the pyramids were made of lower quality materials.

But Egyptologists claim that the pyramids were tombs. Pyramid complexes acted as divine superstructures. This means that every major tomb in ancient Egypt was actually a pharaoh’s tomb.

Since pharaohs were deified as gods in ancient Egypt, each pyramid was part of a temple complex that was managed and maintained by the priesthood long after the pharaoh left the earthly kingdom.

But as Lechner found, the pyramid was also an economic engine, housing people and redistributing food through the temple complex.

But this was possible only because the pyramid was also a cosmic engine that served not only as a tomb, but also as a structure that ensured the supremacy of the universal order, the change of days and seasons, and the flood of the Nile.

But Lechner does not claim that the structure itself was the engine, as many alternative theories suggest, although there is strong evidence that it could have been more than just a tomb.

Lechner explains that the mechanics of the pyramid as a cosmic engine was related to the ancient Egyptian concept of man and the separate phases of life and death, called “heperu” in ancient Egypt.

The pyramid was, in a sense, an instrument that enabled an ancient type of Egyptian alchemy to be carried out; in the various phases of life and death, kheperu, the transformation continued as the ka, ba and body interacted in the final transformation, becoming ah; a glorified being of light that exists in the afterlife.

The pyramid – the pyramid complex – was the cosmic machine that allowed this magical transformation to take place, which means that even for the ancient Egyptians, the pyramid was not only a tomb that contained the remains of the pharaoh.

The pyramid was the tool that allowed this process to take place for the pharaoh, who ruled the earth as an incarnated god and allowed incarnation to pass from father to son, from Osiris to Horus. 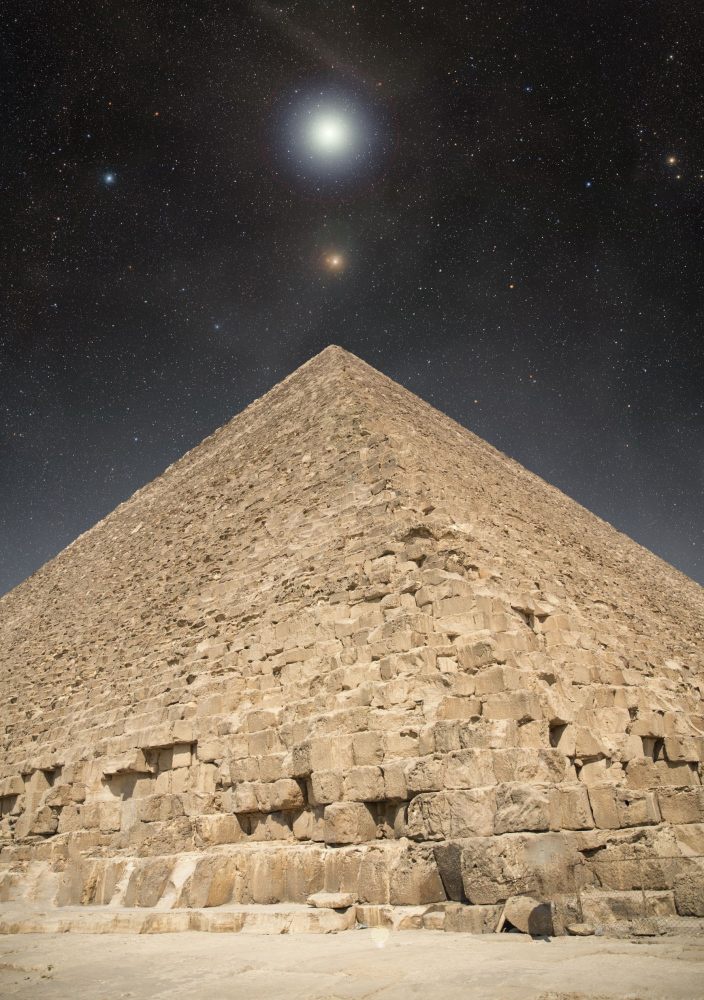 Encompassing the dangerous line between cosmic order and the terrible formlessness of beginningless time, the pyramid was understood as a meeting point of life and light with death and darkness.

Our earliest notion of such ideas comes from the Pyramid Texts, sacred glyphs written on the walls of the pyramid chambers of Pharaoh Unas of the 5th Dynasty.

The Pyramid Texts explain the significance of the pyramid as an icon and give an idea of ​​the burial ceremonies of the king-god and the rituals performed by the royal priests after the mummification of the pharaoh. He was buried by setting the space engine in motion.

Written in ancient Egyptian, pyramid texts were carved into the underground walls and sarcophagi of the pyramids at Saqqara from the end of the Fifth Dynasty. During the Sixth Dynasty of the Old Kingdom and the Eighth Dynasty of the First Intermediate Period.

Archaeologists have discovered a number of 5th Dynasty pyramid names that speak of the king’s ascension and five of his perfection.

In this sense, the pyramid was a machine, a device, a kind of channel, which was used not so much as a tomb, but as a higher, cosmic engine thousands of years ago.