(ORDO NEWS) — Jupiter is said to be a failed star. But is it worth believing the rumors and did Jupiter have a chance to become a full-fledged star?

The smallest known main sequence star in the Milky Way galaxy is the red dwarf EBLM J0555-57Ab, about 600 light-years away.

With an average radius of about 59,000 kilometers, it is only slightly larger than Saturn. This makes it the smallest star known to support hydrogen fusion in its core. It is this process that causes stars to burn until they run out of fuel.

There are two objects larger than this tiny star in our solar system. One is the Sun, the other is Jupiter, which looks like a giant ice cream scoop with an average radius of 69,911 kilometers. The short answer is simple: Jupiter doesn’t have enough mass to turn hydrogen into helium. EBLM J0555-57Ab has about 85 times the mass of Jupiter, yet is about as light as a light star can be. If this body became even a little lighter, it would lose the ability to synthesize hydrogen.

But if our solar system were different, could Jupiter hypothetically turn into a star?

Jupiter and the Sun are more alike than you think

But what is interesting is that the density of the Sun is also low – only 1.41 grams per cubic centimeter. By mass, the Sun is about 71% hydrogen and 27% helium, with the remainder being trace amounts of other elements. Jupiter is about 73% hydrogen and 24% helium by mass – an amazing resemblance, isn’t it?

It is for this reason that Jupiter is sometimes referred to as a “failed star”.

But it remains unlikely that, left to its own devices by the solar system, Jupiter could one day even come close to becoming a star.

How stars and planets are born

You see, stars and planets are born through two very different mechanisms. Stars form when a dense knot of matter in an interstellar molecular cloud breaks apart under its own gravity. Gradually, more and more matter enters the stellar accretion disk.

As mass—and hence gravity—grows, the core of a young star shrinks more and more, causing it to heat up more and more. Eventually, it becomes so compressed and hot that the core ignites and fusion begins.

According to our understanding of star formation, when a star finishes accreting material, some part of the accretion disk remains unclaimed. It is from it that the planets of the planet are ultimately formed.

Astronomers believe that for gas giants like Jupiter, this process starts with tiny chunks of icy rock and dust in the disk.

As they orbit a young star, these pieces of matter begin to collide, sticking together due to static electricity. Eventually, they reach large enough sizes – about 10 Earth masses – and can gravitationally attract more and more gas from the surrounding disk.

Thus, Jupiter has never been even close to becoming a star. It is similar in composition to the Sun, not because it was a “failed star”, but because it was born from the same cloud of molecular gas from which the Sun was born.

There is another class of objects that can be considered “failed stars”. These are brown dwarfs, and they fill the gap between gas giants and stars.

Starting at about 13 times the mass of Jupiter, these objects are massive enough to support nuclear fusion not ordinary hydrogen, but deuterium.

Because it occurs at lower mass, temperature, and pressure, deuterium fusion is an intermediate step on the path to hydrogen fusion for stars as they continue to accumulate mass. But some objects never reach that mass; they are known as brown dwarfs.

An abnormally light “Jupiter” was discovered by astronomers

An abnormally light “Jupiter” was discovered by astronomers 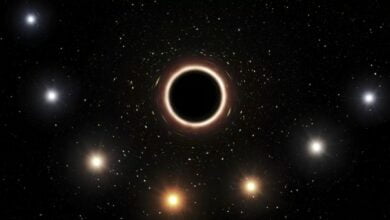