(ORDO NEWS) — For most of its history, the Earth was inhabited exclusively by microscopic organisms. From the new work of paleontologists, it follows that a sharp increase in the size of living things and the appearance of its new forms occurred about 600 million years ago – this corresponds to the heyday of the Lantian biota.

The population of the modern biosphere – a wide variety of organisms, from algae to mammals – for the most part large and multicellular creatures. However, this was not always the case: for most of its history, the Earth remained the “planet of microbes.”

For a couple of billion years, the ecosystems of our planet were bacterial mats or films inhabited by single-celled creatures micrometers in size.

They formed unusually ancient layered structures – the so-called stromatolites , which have survived in the form of fossils to this day. However, at some point, the population of the planet changed dramatically : for a start, life acquired a significant size and became multicellular.

A new paper published by a team of Chinese and British scientists in the journal Geology examines the oldest of large organisms in detail. It turns out that their appearance dates back to the first half of the Ediacaran period – they lived on the territory of modern China about 602 million years ago.

The object of the new study was the so-called Lantian biota. These extremely ancient fossils were discovered near the Chinese city of Xiuxing (Anhui Province).

Some consider the Lantian biota to be the most ancient community of macroscopic creatures (that is, large, visible to the naked eye). Others, however, give the palm to even more ancient biotas – Francville or Huainan. 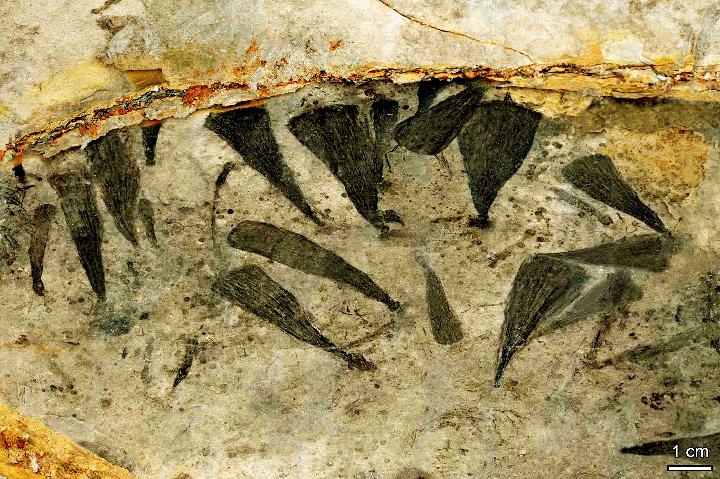 All these “loser biospheres” are completely different from the modern one. They look like something “alien” and, probably, are not directly related to the modern population of the Earth. Presumably, all these creatures quickly arose, formed many life forms, but soon, with a change in environmental conditions, they completely died out.

The Lantian biota, extracted by geologists from shales, includes at least 18 different species. Unlike their predecessors, who by that time had flourished on Earth for a couple of billion years, these creatures became multicellular and turned out to be much larger.

“The macroscopic organisms of the Lantian biota are still quite small by today’s standards,” says Yang Chuan , co-author of the new paper.

“They were only a few centimeters long. But the evolutionary transition from sizes in microns to centimeters was a huge breakthrough in the history of the development of life. The scientists noted that the Lantian biota includes seafloor inhabitants, both algae (such as Flabellophyton sp. ) and putative metazoans.

Soon, the Lantian biota was replaced by an even more diverse and large, but no less mysterious Ediacaran biota. Ediacarans have been found in various parts of the planet: they include, say, creatures with three-beam symmetry (for example, tribrachidium) and mysterious fractal rangeomorphs (charnias).

The size of the Ediacaran biota was much larger – up to one or two meters. With the beginning of the Paleozoic era, these mysterious creatures also disappeared – in the future , much more familiar and understandable creatures dominated the Earth.

What does the future hold for the Earth’s magnetic field?

What does the future hold for the Earth’s magnetic field?