(ORDO NEWS) — The first extraterrestrial drone “Ingenuity” made the nineteenth flight and the first after a local dust storm.

The helicopter flew 62 meters in almost a hundred seconds and demonstrated that it was fully operational, according to a NASA tweet.

Ingenuity landed on Mars in April 2021, having made 19 flights since then, although only five were originally planned.

It is assumed that the device will work as an aerial reconnaissance until its condition becomes critical, and the results obtained will help in the design of new drones for Mars and Saturn’s moon Titan.

The nineteenth flight of the helicopter was supposed to take place on January 5, 2022, but was postponed no earlier than January 23 due to an impending powerful local dust storm, which was recorded by the rover and the MRO orbiter.

It turned out to be the right decision – the storm passed over the Lake Lake crater, where the drone is located, a few days after the date of the transfer, causing a sharp drop in the density of the air mixture below the safe threshold for the helicopter.

In addition, the amount of light available to the drone’s solar array has dropped by 18 percent from normal levels.

However, in the end, the new drone flight took place in early February 2022, when the weather conditions became favorable.

The drone flew about 62 meters in 99.98 seconds, getting even closer to its target – the first takeoff site, where it was landed by a rover in April last year. 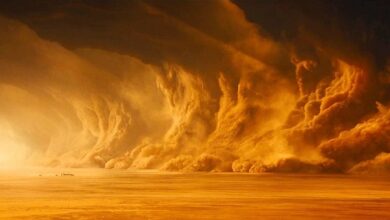