(ORDO NEWS) — Mars helicopter Ingenuity recently captured new images of the parachute that helped the Perseverance rover land on Mars and the cone-shaped rear cover that protected the rover in outer space and during its fiery descent to the Martian surface on February 18, 2021.

Engineers from the Mars Sample Return Program asked Ingenuity to take such images. The result was 10 color aerial photographs taken on April 19 during the 26th flight of Ingenuity.

“NASA has expanded the capabilities of Ingenuity flight to perform groundbreaking missions like this one,” said Teddy Tzanetos, Ingenuity team leader at NASA’s Jet Propulsion Laboratory in Southern California.

Every time we’re in the air, Ingenuity opens up new possibilities and offers perspectives that no previous planetary mission has been able to achieve.” These images are a perfect example of the usefulness of aerial platforms on Mars.”

Entering the atmosphere of Mars, descending and landing on Mars are fast and stressful processes, not only for engineers on Earth, but also for a vehicle that withstands gravitational forces, high temperatures and other extreme conditions that occur when entering the Martian atmosphere at a speed of almost 20 000 km/h. The parachute and rear case were previously photographed from a distance by the Perseverance rover.

But pictures taken from a helicopter (from the air and closer) allow you to get more details. These images could help ensure safer landings for future spacecraft such as the Mars Sample Return Lander, which is part of a reusable campaign in which Perseverance will bring samples of Martian rocks, atmosphere and sediment back to Earth for detailed analysis.

Perseverance had the most documented Mars landing in history, with cameras showing everything from parachute deployment to landing,” said JPL’s Ian Clarke, a former Perseverance systems engineer. “But the Ingenuity images offer a different perspective on the landing.

If they can either confirm that our systems worked as they should, or provide just one piece of engineering information that we can use to plan a return to Mars, that would be amazing. And if not, the pictures will still be phenomenal and inspiring.”

The images show the vertical rear hull and a field of debris resulting from its impact with the surface at a speed of about 126 km / h. It can be seen that the protective coating of the rear case remained intact during the entry into the Martian atmosphere.

Also visible are some of the 80 high-strength lines connecting the shell to the parachute, which appear intact. Spread out and covered in dust, the 21.5-meter-wide orange-and-white parachute is the largest ever deployed on Mars, only a third visible, but the dome shows no signs of damage from supersonic airflow during inflation. It will take several weeks of analysis to reach a final verdict.

Mars rover Perseverance begins its campaign at the entrance to Delta

Mars rover Perseverance begins its campaign at the entrance to Delta 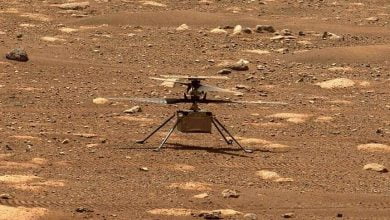 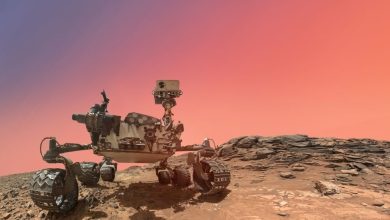