(ORDO NEWS) — A new study shows that the size of Earth’s moon relative to the size of the planet itself may have played a key role in the evolution of life. What’s more, this relationship could be applied to other planetary systems as well, providing researchers with a potential benchmark in the search for extraterrestrial life.

To understand how the Moon affects life on Earth, you must first understand what the Moon is. The simplest definition is a cosmic body revolving around a planet. But not all moons are the same. For example, Venus does not have a single moon, while Jupiter has at least 80.

Of course, the Earth only has one Moon. And even its origin is still the subject of heated debate. Now the debate is hotter than ever as a new study appears to set a size limit for both exoplanets and their moons, at least when it comes to the search for extraterrestrial life.

“Earth is the only known planet to support life and has a number of features unique to our solar system, including active plate tectonics, a strong magnetic field and a large moon in relation to the size of Earth,” the published study explains.

“The presence of the Moon controls the length of the day and ocean tides, which affects the Earth’s biological cycles. The Moon also stabilizes the Earth’s axis of rotation by at least a few degrees. So, at least for the Earth, the Moon also contributes to the Earth’s stable climate and is potentially ideal environment for the development and evolution of life.”

In an attempt to determine how the size of a host planet affects the formation of its moon, and how that might affect the planet’s habitability, the scientists who conducted the study modeled several scenarios for the formation of Earth’s moon.

The most popular is the accretion model, where material ejected from the Earth (probably as a result of a powerful collision) creates an accretion disk that slowly but surely forms into the Moon.

However, when researchers modeled planets about six times the size of Earth, such as the numerous “super-Earths” already found outside our solar system, the accretion model of the moon’s formation collapsed. Essentially, all of the ejected material either evaporated or fell back into the host planet, preventing the disk from forming into a moon. As a result, the researchers concluded that to support extraterrestrial life. a smaller planet may be required.

“Here we assume that the initially vapor-rich moon-forming disk is not capable of forming a moon that is large relative to the size of the planet, because the growing lunars, which are the building blocks of the moon, experience strong gas resistance and quickly fall towards the planet,” the study explains. . “Our collision simulations show that terrestrial and icy planets larger than ~1.3-1.6R⊕ form fully steam disks that cannot form a fractionally large moon.”

This situation, the study notes, “indicates that (1) our model supports Moon formation models that result in ferry-poor disks, and (2) rocky and icy exoplanets whose radii are less than ~1.6R⊕. are ideal candidates for hosting fractionally large exomoons.”

This ratio is important, the researchers say, because a moon of a significant fractional size compared to the host planet is needed for large-scale effects such as plate tectonics, tides, orbital mechanics and other effects that help sustain life on Earth. This type of moon, they say, cannot form around planets that are vastly larger than Earth.

After the successful launch of the James Webb telescope, the hunt for life on other planets has moved to a high level. And, judging by the latest research, these searches should be focused on planets closest in size to Earth.

Moreover, although the presence of exo-moons (moons around exoplanets) has not yet been confirmed, once our surveys and analysis of exoplanets become complex enough to make such measurements, the search for an Earth-like planet that also has a moon similar in relative size to our own moon would be the perfect place to start.

“Search’s for exoplanets typically focus on planets larger than six Earth masses,” said study lead author Miki Nakajima of the University of Rochester. “We suggest focusing on smaller planets instead, as they are likely the best candidates for hosting fractionally large moons.” 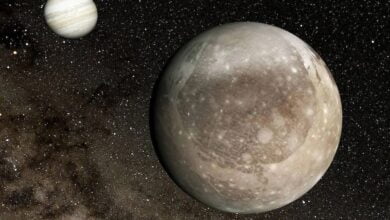