(ORDO NEWS) — Ancient and colonial sources speak of a vast subterranean labyrinth of caves and tunnels that the ancient Zapotec believed was the physical entrance to the underworld of Liobaa, located beneath the ancient city of Mitla, Mexico.

A new research project aims to unlock the secrets of the Mitla underground world using the latest geophysical equipment.

The archaeological site of Mitla, located in the Central Valley of the state of Oaxaca, is one of the most famous and well-preserved in all of Mexico.

The first permanent human settlement in this area dates back to 8000 BC. and is associated with the earliest evidence of crop domestication in the Americas.

Mitla reached its greatest greatness in the postclassic period, around 1200 AD, and in the classical period (c. 100-650 AD) was already an important city. At the site of Mitla, five main groups of structures have been explored and documented.

The column group, the church group, and the Arroyo group are the best preserved and share similar characteristics, including the use of large megalithic stone blocks for construction, as well as the mosaic decoration of the facades. 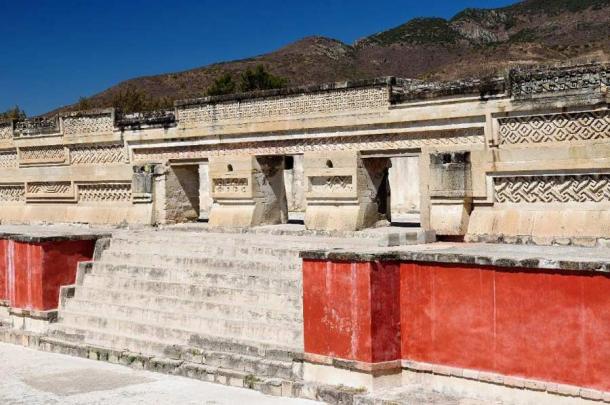 Some of the monolithic lintels used in the palaces, especially the “Column Group”, are up to 6 meters (20 feet) long and have been estimated to weigh more than 30 tons (27,216 kilograms). Monolithic columns, each over 5 meters (16 ft) tall, were also used to support the roof of some palaces.

The walls of the buildings were covered with beautiful and extremely intricate stone mosaics, perhaps in imitation of textiles.

Hundreds of perfectly cut, polished and fitted stones were used to create each mosaic panel. In some cases, the walls were painted in a style that archaeologists have called the “Code style” for its resemblance to old Mixtec codices and manuscripts. 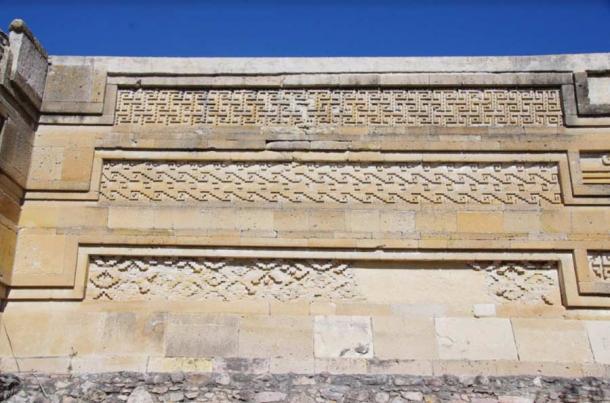 Beneath the palaces of Mitla, there were several exceptionally well-built and decorated underground chambers, which were probably the tombs of priests and kings.

These chambers were usually cruciform with four long sleeves extending from the center. Each chamber was partially excavated from hard rock and then lined with huge blocks of stone to form the walls and ceiling.

Similar megalithic chambers have also been found around Mitla, at Girun and Haag. The cruciform chamber at Girun, in particular, was built from huge, perfectly hewn stone blocks, the largest weighing over 50 tons (45,359 kilograms). 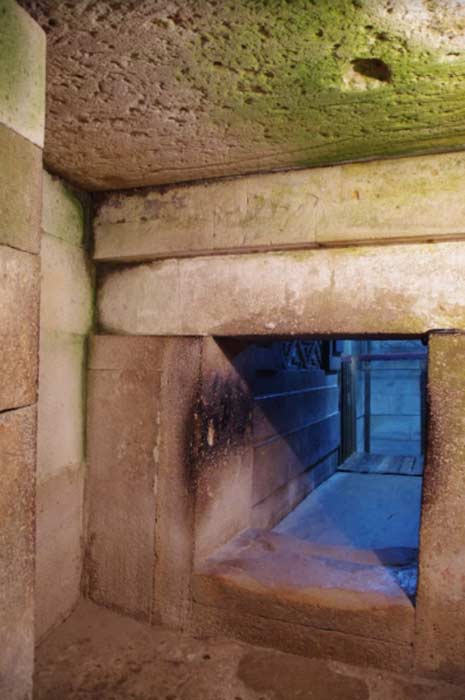 The reason for the great importance of Mitla in ancient times seems to have been the presence beneath the city of a vast system of caves, which the Zapotecs considered the physical entrance to the underworld, which they called Liobaa.

Huge underground chambers running in many directions like streets and corridors supported by columns are described in Spanish accounts of the 16th and 17th centuries. 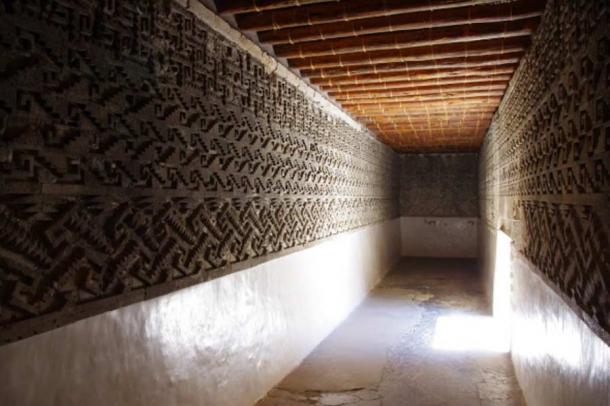 In the 17th century, the Dominican father and inquisitor Francisco de Burgoa left perhaps the most complete account of Mitla’s underground labyrinth:

“The last (underground) chamber had a second door in the back, which led to a dark and eerie room. It was closed with a stone slab that occupied the entire entrance. Through this door they threw the bodies of victims and great lords and leaders who fell in battle…

And so great was the barbaric infatuation of these Indians that, believing in a happy life that awaited them, many, oppressed by disease or deprivation, begged this shameful priest to accept them as living victims and allow them to enter through this portal and roam in the dark bowels of the mountain. to look for the feasting places of their ancestors…

And the unfortunate one, wandering in this abyss of darkness, was dying of hunger and thirst, having already begun the torments of his curse during his lifetime, and because of this terrible abyss they called this village Liyobaa. 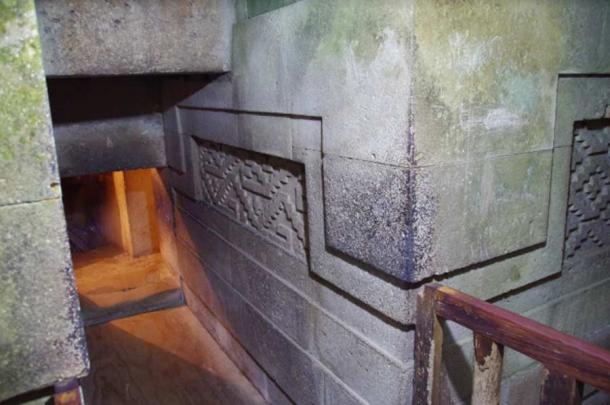 And the rotting, and the bad smell, and the dampness of the earth were very great, and there was also a cold wind that blew out their torches.

And after they had walked a short distance, afraid of being overwhelmed by the stench or stepping on the poisonous reptiles that several had seen, they decided to go out again and completely wall up that back door of hell.

Only four above-ground buildings remained open, and they had a courtyard and chambers, the same as under the ground; the ruins of these buildings have survived to this day” [“Geographica Descripción”, 1681]. 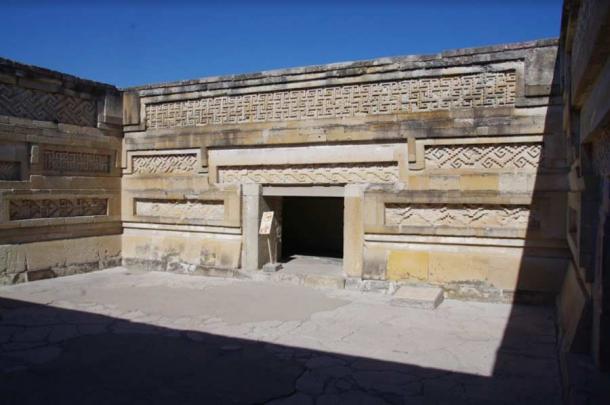 All entrances to the underground labyrinth were allegedly sealed off when a church was erected on the site at the end of the 16th century, partly using walls and stones from ancient ruins.

Attempts made in the 19th and 20th century to find the lost labyrinth led to the discovery of at least two monumental tombs under one of the courtyards of the column group, but much of the area, especially the church group, remained virtually unexplored.

Project Lyobaa now aims to uncover the secrets of the Mitla underworld by searching for possible underground cavities under the church and column group.

The project is the result of an institutional collaboration and partnership between the Mexican National Institute of History and Anthropology (INAH), the National Autonomous University of Mexico (UNAM) and the Association for Archaeological Research and Exploration ARX (ARX Project, AC).

Using the latest technology and state-of-the-art geophysical equipment, the Lyobaa project seeks to uncover the truth behind Mitla’s underground legend through a combination of three different geophysical exploration methods that will allow us to literally look underground without the need for potentially destructive excavations.

Methods proposed for this project include the use of ground penetrating radar (GPR), electrical resistivity tomography (ERT) and seismic noise refraction tomography, all of which have already been successfully applied at other important Mexican archaeological sites such as Teotihuacan and Chichen Itza. .

In the first phase, research will focus on the so-called Group of Churches and Group of Columns, which are the most important and best preserved of the ancient palaces of Mitla. In a second phase, the studies could be expanded to include some other groups of structures at Mitla.

With your donation, you will help uncover the secrets of one of the most important archaeological sites in all of Mexico, which has the potential to provide new insights into the origins of the Mesoamerican civilization.