US, WASHINGTON (ORDO NEWS) — Something very strange happened in Indonesia a few days ago that shocked many eyewitnesses. At one of the local cemeteries, the most common funerals were held. When the invited priest recited another prayer, the corpse, which was at that time in the tomb, began to move. His movements were clearly visible in the window, which is present in the very lid of the coffin. It is worth noting that the funeral was held on May 5 in the city of Manado and they were held according to the Christian rite.

The event was recorded on video. During the prayer, the coffin was removed and you can see very clearly that something is moving inside the coffin. What reminds me most of all is that the deceased allegedly waved his hand and tried to touch the window made in the lid.

The author of the video did not immediately notice what happened. When the wave was noticed, the video was immediately posted on social networks, where it began to spread at an incredible speed. Some users wrote that a person could actually be still alive during the burial. Others are sure that in this way the deceased said goodbye to his family.

Scientists, in turn, stated that this could be a completely natural movement of the body of the deceased, which can often occur during decomposition. The body can change position due to the fact that gases come out of it. 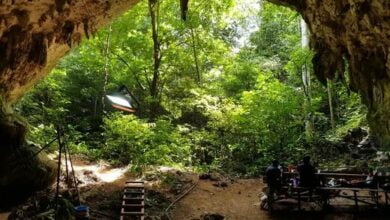