(ORDO NEWS) — The Serapeum at Saqqara has been a constant source of speculation and mystery since its rediscovery in 1850.

Even now, no theory has been able to accurately explain how and why the 24 giant sarcophagi were moved to this place and accurately installed in their niches.

The main theory suggests that the site was used for the burial of Apis bulls, although there are many elements that do not agree with this opinion. 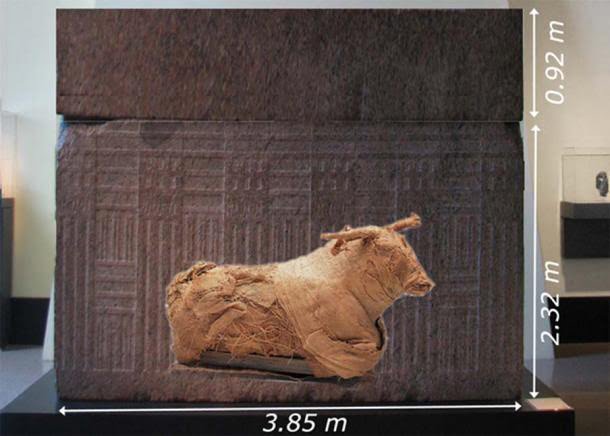 Why not do the same for the pharaohs, who were buried in tiny coffins that barely fit their bodies?

Why were the sarcophagi of the Serapeum made of granite and not limestone, a material much easier to work with?

And if the Serapeum was the burial place of the Apis bulls, then where are the mummies of the bulls? 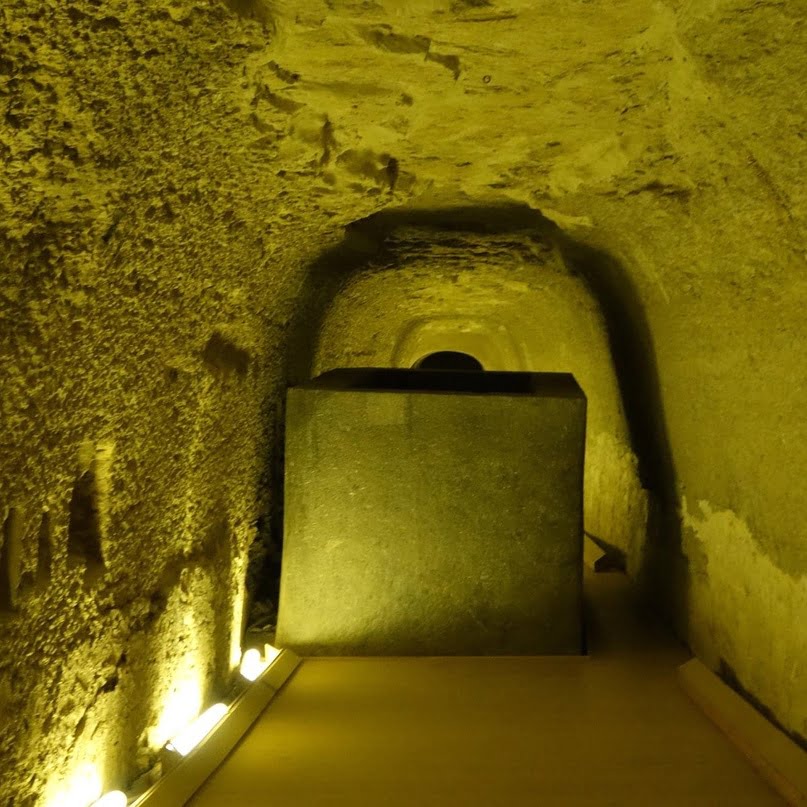 I don’t agree with the theory that the Serapeum was used for ceremonial burials (at least not in the main gallery of the site where the large sarcophagi are), but if not that, then what was it used for? Egyptologists do not want to discuss other versions, but they cannot forbid us from doing so. 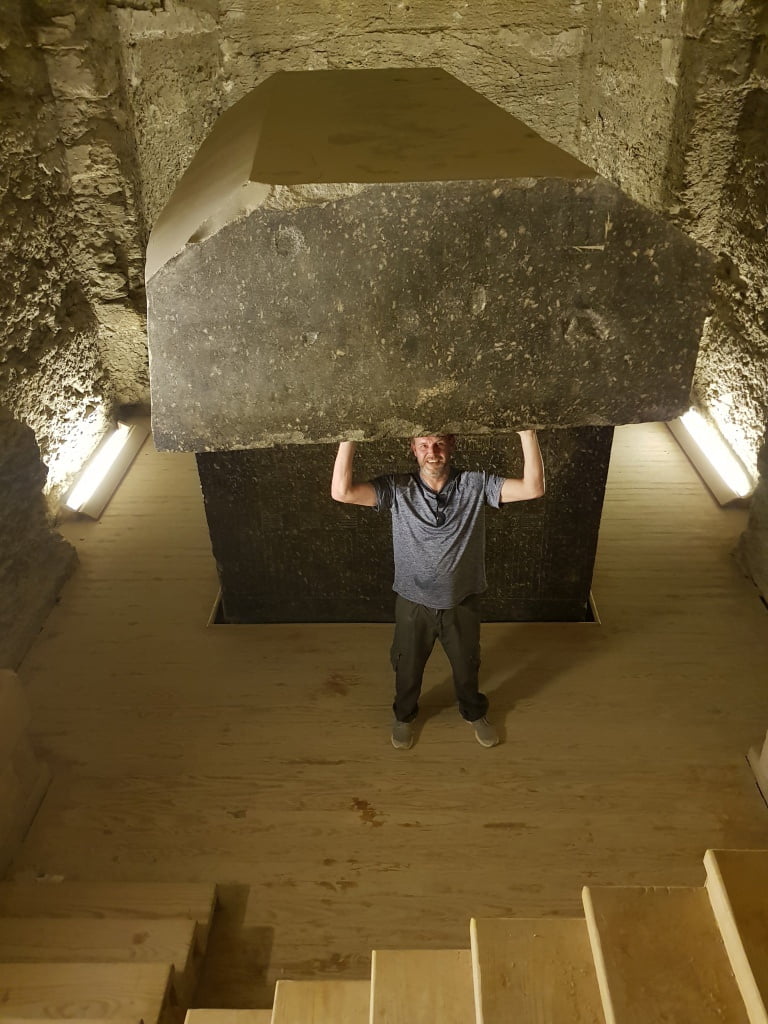 I’ve thought about this for a bit and come up with a theory that seems to answer some questions. Here are my thoughts.

It is well known that even the ancient Egyptians knew about the fermentation process. By about 3000 B.C. they already used this process to make beer and bake bread. And some scientists claim that this process was known even before that. 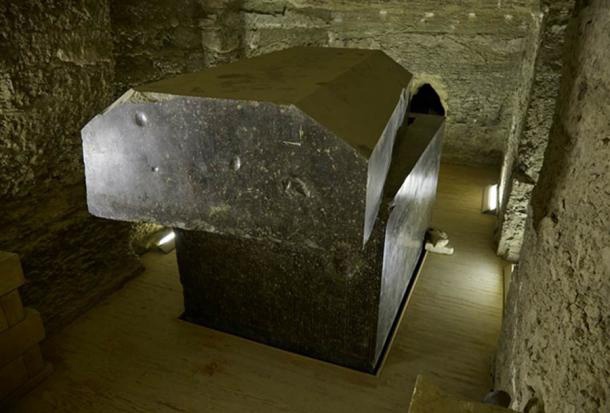 Suppose that in pre-dynastic Egypt, someone mixed starch and meat, placed these ingredients in a huge sarcophagus, and closed the lid. A certain set of ingredients comes to mind: bread, beer, barley and bulls, as they are mentioned many times in ancient Egyptian texts.

As fermentation begins, the yeast begins to convert the starch found in the barley into CO2 gas and ethanol. The amount of CO2 gas increases in the box, creating pressure.

I’ll explain later why this pressure is important, but first let’s analyze this setup. 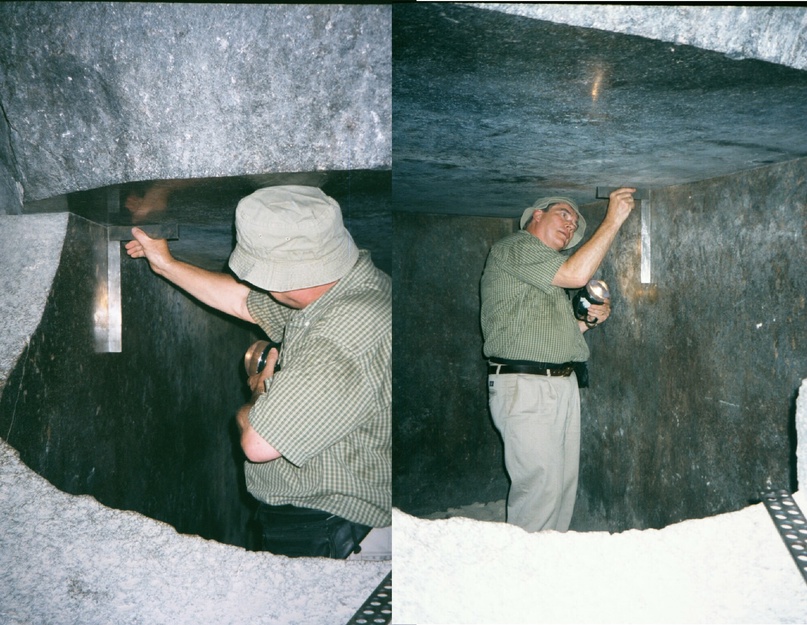 One of the ingredients required for yeast growth is +oleic acid. It is a fatty acid found in animal and vegetable fats. Oleic acid is essential for yeast to maintain growth rates.

This acid is also needed by the yeast to overcome the toxic effects of ethanol, which accumulates in the coffin as a fermentation by-product. This acid is found in abundance in meat.

I can’t help but wonder if the main purpose of meat or body parts of a bull, placed in huge granite boxes, was to provide the yeast with the necessary chemical components for long-term growth.

As fermentation continues, CO2 gas builds up pressure in the granite box. Granite can withstand a pressure of at least 200 MPa.

For comparison, this is 1000 times more than the pressure in car tires. The yeast in the box will be subjected to such pressure – and they are able to withstand such stress.

As the pressure increases, a mechanical effect will be exerted on the huge granite box. It is well known that granite is composed of quartz crystals, and when mechanically acted upon, these crystals generate an electrical charge. Thus, an increase in pressure means an increase in electric charge. 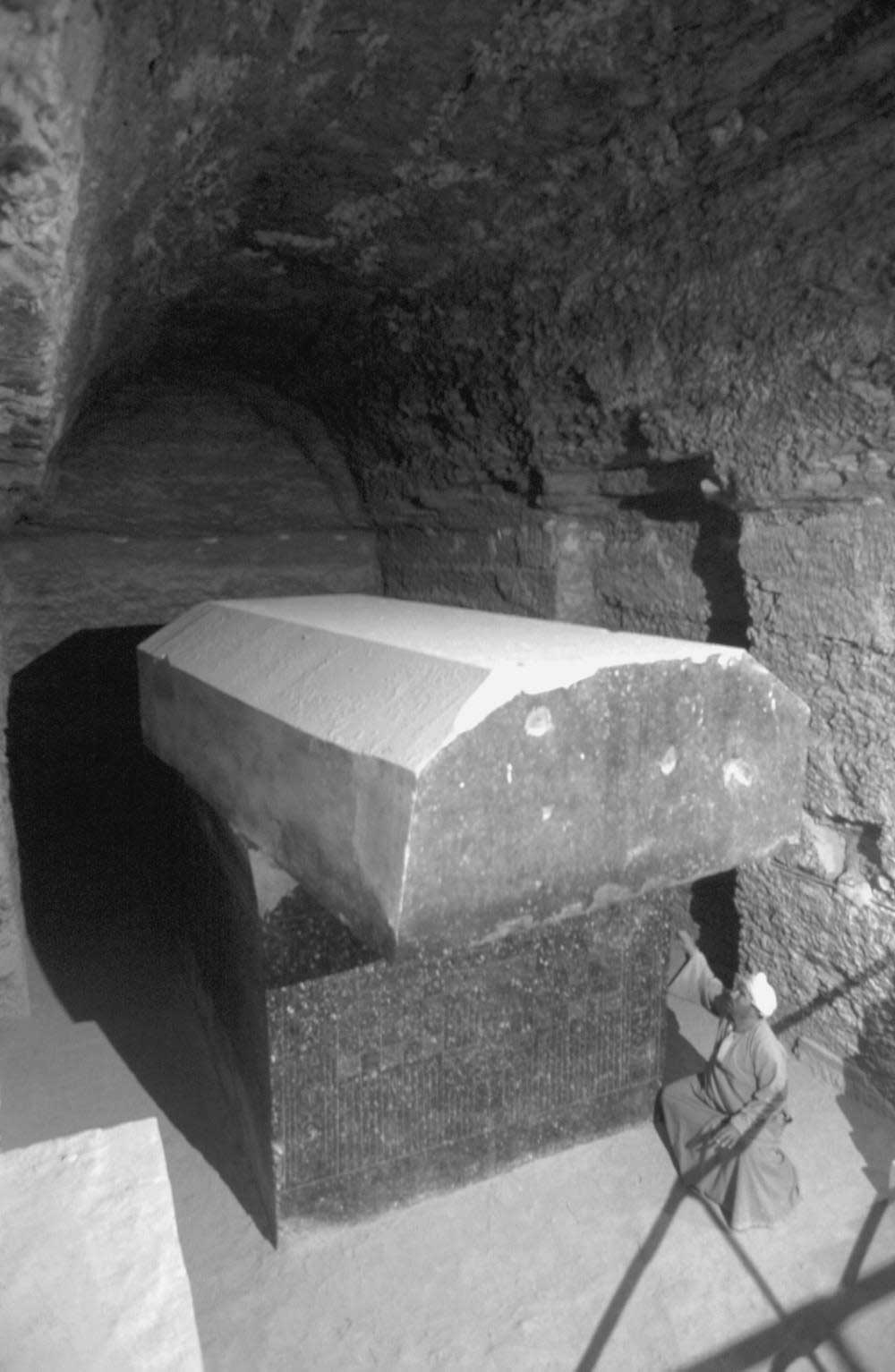 At some point, the pressure inside the box will overcome the weight of the lid and open it, releasing the gas. However, when the Serapeum was rediscovered in 1850, several sketches of the interior were made then or soon after. Below is one of those sketches.

One interesting aspect that cannot be overlooked in this photo is the pile of stones piled on the lid of the sarcophagus. It looks like someone used blocks to compensate for the pressure inside the box with additional weights placed on the lid, essentially increasing the pressure of the quartz crystals. 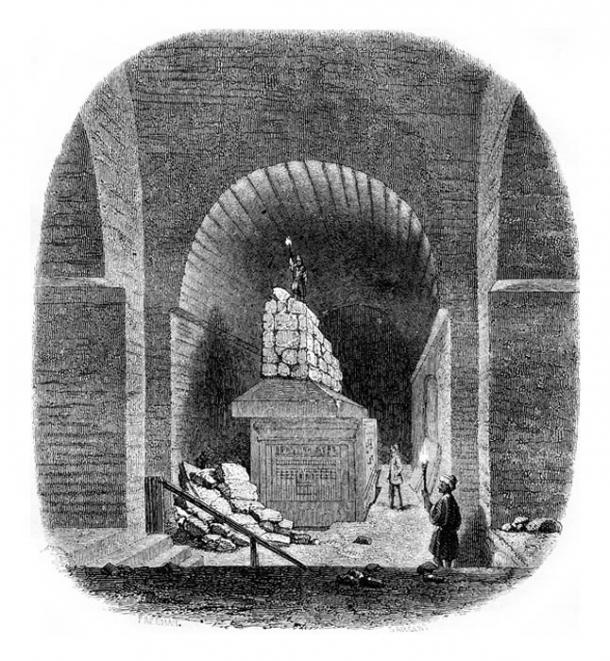 Another point: if someone opened the lid of the Serapeum sarcophagus after millennia, then, most likely, he would see only that the yeast was not consumed before drying. They were bull bones, exactly what Mariette found at the Serapeum when it was opened in 1850.

Many who have visited the Serapeum since its opening may have noticed that there is no soot on the ceiling and walls. Having noticed this, it is impossible not to wonder how all the work was completed underground in complete darkness.

Thinking about it, I don’t think this place would be completely dark. In 2010, Kato, Mitsui and Yanagidani analyzed the effect of high pressure on granite material and the luminescence caused by this pressure.

During the study, a granite slab was selected and subjected to high pressure to such an extent that the surface of the stone began to glow. The figure below shows the experimental results of this study.

As analyzed in the article, granite under the influence of stress creates a voltage potential on its surface. If the voltage is high enough, it will ionize the air around the surface, creating a glow. 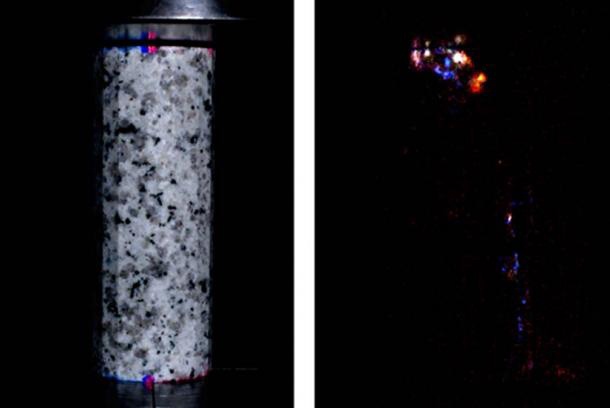 Because pressure was built up in the granite boxes of the Serapeum, I don’t think the big gallery would have been dark. However, it is very unlikely that the builders went to the trouble of moving so much cargo just to light up the hall of the great gallery. 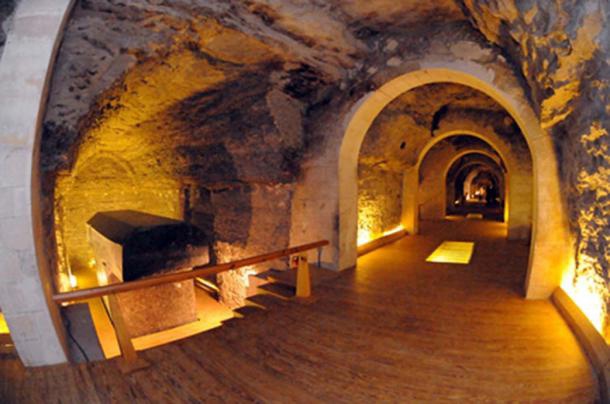 There must be a more pragmatic reason. Let’s take a look at how electrical charges could have been used in ancient Egypt.

Over the centuries, there have been numerous reports of lights appearing in various forms and at various times above the earth’s surface shortly before, during, or after earthquakes.

One of the last cases of lights appearing during an earthquake was recorded in L’Aquila, Italy, in 2009, when a 6.3 magnitude earthquake struck there. Shortly before the earthquake, people reported seeing lights over the city.

This phenomenon was analyzed in detail, about 1000 people were interviewed. The conclusion of the study was that the electrical charge released during the earthquake caused the light effect.

Although this phenomenon has been known since antiquity, modern video surveillance equipment (installed on every corner in cities) helps researchers analyze it.

And several research groups have already done it. A team from the University of San Jose, led by Professor Freund, collected data from 65 different locations around the world where earthquake lights had been spotted. 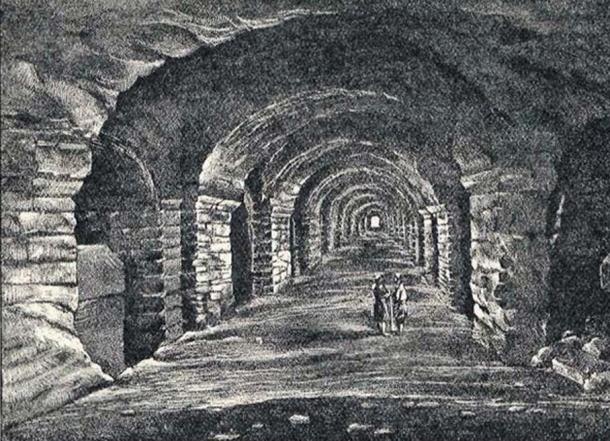 Extensive work has been done to analyze the data and the underlying physics. The results showed that the phenomenon of earthquake fires is caused by stress in the granite material present in the soil. To confirm the results, a theoretical and experimental verification was carried out. 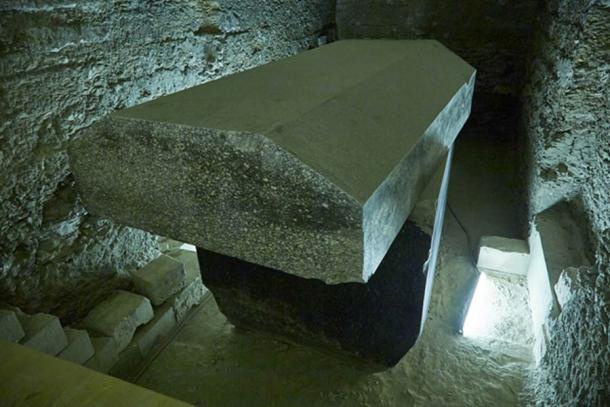 I think that it was an underground power plant and it was so powerful that it illuminated not only its underground corridors, but its energy was enough to supply electricity and illuminate a huge area on the surface of the earth.

Rosetta Stone moved for the first time in 18 years

Rosetta Stone moved for the first time in 18 years