(ORDO NEWS) — Scientists have found that the layered ice deposits of Burroughs Crater, located in the southern hemisphere of Mars, reflect climate changes associated with the orbit and tilt of the planet. Further research will determine periods of time in the past when Mars could have been inhabited.

Recently, in the craters of the southern hemisphere of Mars, scientists have discovered layered deposits of ice. Now, an international team of astronomers has shown that the alternation of layers reflects the seasonal variability of the planet’s climate over the past 4.5 million years.

They were able to reconstruct how the tilt of the planet’s axis and its position in orbit affected the weather. The results of the study, published in the journal Geophysical Research Letters, will make it possible to determine the period in the history of Mars when life could theoretically exist on it.

Like on Earth, ice deposits on Mars reflect changes in climate, including changes in humidity and temperature. Climate is also affected by the tilt of the planet and the shape of its orbit. The tilt of the axis of rotation of Mars is 25.19 degrees and provides a change of seasons.

In this case, the elongated shape of the orbit leads to differences in their length. For example, in the Northern Hemisphere the Martian summer is long and cool, while in the Southern Hemisphere it is short and relatively warm.

Previously, climate studies of ice on the Red Planet were limited to the polar caps, but these ancient and large deposits are likely to have lost fine details that could indicate their connection with the orbit of Mars. Therefore, scientists turned to the ice deposits of craters, the width of which does not exceed tens of kilometers.

Astronomers analyzed in detail images of the southern hemisphere of Mars taken by the HiRISE camera aboard the NASA Mars Reconnaissance Orbiter spacecraft. Scientists have discovered exceptionally well-preserved ice sheets in Burroughs Crater, which is 74 kilometers wide.

The average rate of ice accumulation in this crater was 0.13 millimeters per year, and scientists estimate that ice appeared in it about 4.5 million years ago.

At the same time, its layered structure perfectly reflected the orbital cycles of Mars. In cold periods, thicker and more transparent layers of ice formed, and in warm periods, more turbid and thin.

Determining the relationship between orbital cycles and climate is important for understanding both the history of Mars and the complex climate dynamics on Earth.

The climate of our planet is influenced not only by its orbit and axial tilt, but also by the biosphere and tectonic activity. There are no such factors on the Red Planet, and this is what makes it an attractive object for studying the climate. 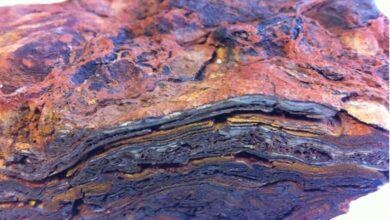