The painting was created with ocher, which was used in ancient times as a paint. Many amazing drawings have merged to create one composition on the rocks. A real work of art is spread over several caves in the Colombian Amazon.

According to Mark Robinson of the University of Exeter, the painting is indeed a unique archaeological site that reveals the life of people of the past. 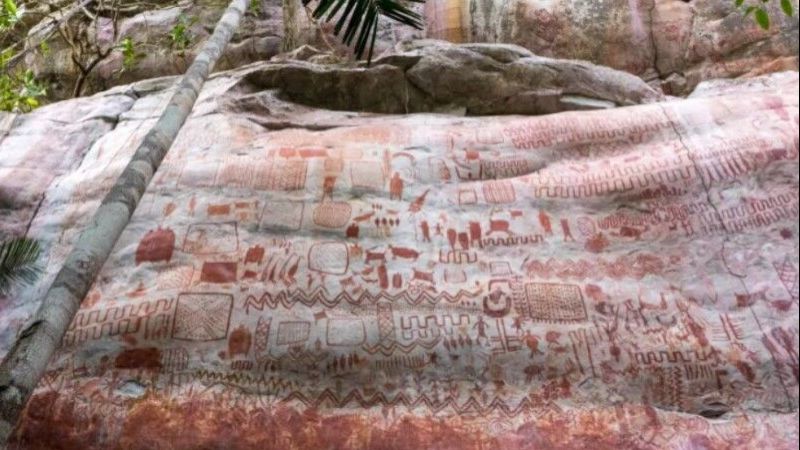 The first drawing was most likely left in the Serrania la Lindosa area at a time when the Ice Age was approaching its logical end. This is roughly 11,800-12,600 years ago. The Amazon was then just taking the form that we see today.

Ancient people actively left handprints, geometric patterns, and a large number of animals they encountered. In those days, there were deer, tapirs, alligators, primates, turtles, porcupines, camels, etc. Today, some creatures on the territory can no longer be found.

On some parts of the rock, one can observe scenes of hunting and gathering. It is difficult to imagine how people used to survive among predators and all kinds of dangers that nature prepared for them. Some of the creatures were comparable in size to the machine. Most of South America’s animals eventually became extinct, possibly due to significant climate change or overhunting. Thanks to the drawings, it was possible to find out that the ancient people ate alligators, snakes, rodents, piranhas and plant foods.

The tape parasite gives ants eternal youth, but takes a high price for it

The tape parasite gives ants eternal youth, but takes a high price for it