(ORDO NEWS) — Scientists have noticed that hummingbirds can memorize sequences of numbers and build a food strategy based on them. They believe that this is the first case of performing simple mathematical operations by wild animals.

Humans are the only creatures that can perform complex mathematical operations. However, some animals understand what counting and sequence are. A team of researchers from the University of St. Andrews in the UK and the University of Lethbridge in Canada found that hummingbirds understand some of the properties of numbers and can use them to find food. In an article published in the journal Proceedings of the Royal Society B, they describe the experiments that were conducted with the birds, and what they learned from them.

The experiments took place in the Rocky Mountains in North America, where ocher hummingbirds (Selasphorus rufus) live. The team built artificial flower feeders for them and for some time allowed the birds to fly quietly to them, so that they would become accustomed to such a diet. Researchers then caught several hummingbirds, for which an array of four rows of ten feeders was developed. In each row, only one was filled with sucrose solution, the rest were empty.

At each visit to the massif, the birds studied the flowers until they found the only one with nectar. Scientists recorded the order in which they flew to the feeders, and then moved so that hummingbirds could not visually remember the location of the flower with nectar. Only a number of feeders and the distance between them changed, but not the order.

a) a photograph of the data array. b) a red-haired hummingbird feeling for an artificial flower. / © Tom Oldridge. c) a schematic representation of the possible positions of the training arrays. d) the training array (top) and the sample test array (bottom). The circled flowers are reinforced positions (without the reward provided during the test tests). / © Proceedings of the Royal Society B: Biological Sciences (2020).

During the experiments, hummingbirds unmistakably found a complete feeding trough regardless of where it was located. It turned out that the accuracy of their calculations almost does not depend on the serial number of the flower with nectar: ​​in the vast majority of cases they found the correct one. This may indicate that the birds understood what number the food was under and performed simple mathematical operations, for example, an ordinal count.

The distribution of errors was not constant. When the first feeding trough was the first, hummingbirds were less likely to fly around the rest than when they were put in fourth position. Moreover, if the birds were mistaken, then they chose a flower that was closer to the beginning of the row. “This could be the result of errors caused by a generalization of the spatial arrangement of the flower with a reward: the bird remembered that the reward was near the nearest edge of the array,” the authors of the article say.

They believe that their study is the first demonstration of memorizing a numerical sequence by free-living wild vertebrates, and they are going to continue testing to find out if hummingbird skills reflect their role as pollinating birds.

Scientists have suggested the origin of repeated cases of COVID-19

The earth is threatened by a new ice age

Scientists have suggested the origin of repeated cases of COVID-19

The earth is threatened by a new ice age 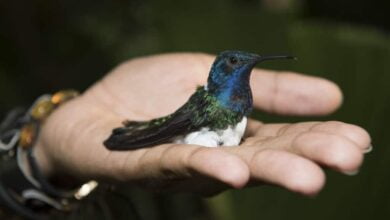