(ORDO NEWS) — A powerful solar flare again occurred on the surface of the Sun. An X-class flare, the most intense our star produces, was captured by NASA’s Solar Dynamics Observatory as it erupted from a sunspot on the Sun’s lower left limb at 9:25 AM EDT (13:25 GMT) on Tuesday (May 3) ).

Sunspots are areas on the surface of the Sun where powerful magnetic fields, created by a stream of electrical charges, knot and then suddenly break off. The release of energy results in bursts of radiation called solar flares and explosive jets of solar material called coronal mass ejections (CMEs).

“Solar flares are massive bursts of radiation,” NASA tweeted after the event.

“Harmful radiation from a flare cannot pass through the Earth’s atmosphere to physically affect people on the ground, but – at sufficient intensity – it can disturb the atmosphere in the layer where GPS and communications signals pass.”

Upon reaching the Earth, X-ray and ultraviolet radiation from solar flares ionizes atoms in the upper atmosphere, which makes it impossible for them to reflect high-frequency radio waves and leads to a radio blackout.

Radio occultations occur over areas illuminated by the Sun during the flare and are classified from R1 to R5 depending on severity.

The latest flare caused an R3 eclipse over the Atlantic Ocean, which is as strong as the eclipse caused by the flare over Australia and Asia during the Easter weekend last month.

Solar activity, which has been known to astronomers since 1775 to rise and fall in a roughly 11-year cycle, has been particularly high recently, with sunspot numbers nearly double what NOAA predicted.

And the most intense activity is probably yet to come. The activity of the Sun is predicted to increase steadily, reaching a general maximum in 2025, and then decrease again.

This increase in activity means that on the night of the solar storm, the aurora will be visible much further south than usual.

This is because the Earth’s magnetic field is slightly compressed by waves of high-energy particles that travel along magnetic field lines and excite molecules in the atmosphere, releasing energy in the form of light, creating colorful, iridescent curtains in the night sky. 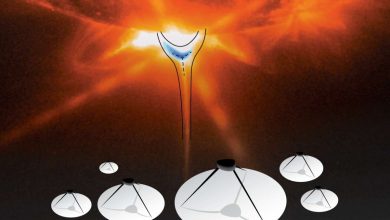 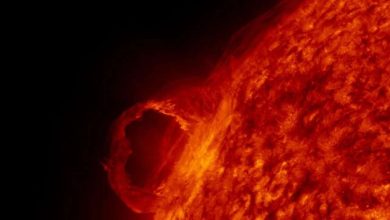