(ORDO NEWS) — Pluto is no longer considered a planet (it is officially called a dwarf planet because it does not meet all the requirements from the “planetary” list), but this does not make it any less interesting object of study.

For 76 years, Pluto was the ninth planet in our solar system. No one cared about the fact that it was the smallest planet in the solar system, which is half the size of our moon. No one objected to the fact that he had an inclined oval orbit. Pluto was a strange planet, but it was a planet.

Why is Pluto not a planet anymore?

In 2006, when Pluto became a dwarf planet, there was an uproar in society. The International Astronomical Union (IAU) has redefined the concept of “planet”. And Pluto no longer fit those requirements.

This new definition required the planet to abide by three rules. First, it must revolve around the Sun. Second, it must have enough mass for its own gravity to give it the shape of a spheroid. Third, it must be able to clear its orbit of other objects. Pluto failed the third test, causing it to become a dwarf planet.

Why is Pluto a special planet?

Pluto certainly has interesting geology. In 2006, we learned that Pluto has an atmosphere and maybe even clouds.

There are also mountains of water ice, fields of frozen nitrogen, and snow-capped peaks covered in methane. It even has dunes and volcanoes. With this varied landscape, Pluto rivals any rocky world in the inner solar system.

This diverse geology, the possible presence of an atmosphere, and other characteristics that scientists have been able to calculate thanks to the New Horizons spacecraft may be decisive evidence that Pluto is still a planet.

The IAU plans to consider all this information and does not deny that after that it can return the status of a full-fledged planet to Pluto.

How did Pluto originate?

After studying the chemical composition of Pluto, a team of US researchers in 2018 concluded that the distant little wanderer was born from a collision of a bunch of comets – an origin unusual for objects in the solar system.

We assume that the planets are formed as a result of the accretion of matter from the protoplanetary disk surrounding the newborn star.

The smooth ice of Sputnik Plains on Pluto is made up mostly of nitrogen; It is so cold on Pluto that this gas, which on Earth makes up 80% of the atmosphere, exists in the solid phase.

This amount of nitrogen can be explained by the fact that Pluto was formed as a result of the collision of millions of objects similar in composition to the Churyumov-Gerasimenko comet, explains one of the authors of the work, planetary scientist Christopher Glein.

Nitrogen on Pluto forms glaciers that slowly travel across the surface of the dwarf planet and grind it away, erasing hills and craters. The content of this element on Pluto is unusually high; according to American researchers, it accounts for up to 98% of the mass of the entire celestial body.

Previous suggestions have been made that nitrogen ice on Pluto was caused by nitrogen-rich comets hitting it, but a new estimate of the amount of nitrogen forces that thought to be abandoned.

Scientists modeled the formation of Pluto from comets and came to an even more exotic conclusion: the dwarf planet mostly inherited matter from comets, but its composition was influenced by … liquid water, possibly an ocean that formed under the surface.

The comet model also explained another mystery of Pluto – low (compared to other objects in the solar system) content of carbon monoxide. According to the comet model, all the monoxide could be trapped in the bowels of the dwarf planet.

The accretion model with great difficulty explains the lack of CO, so the authors of the work believe that they are closer to the truth than those who believe that Pluto appeared in the same way as the planets of the solar system. 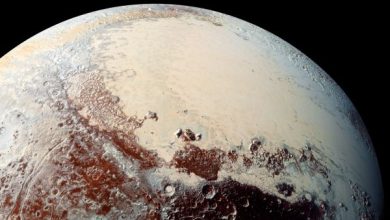