(ORDO NEWS) — The Hubble Space Telescope , by zooming in on a small corner of the cloud 7,500 light-years away, has revealed a spectacular picture of the birth of young stars.

Star formation is a mysterious process, and we have a chance to see it in all its glory.

The object we’re interested in is called J025157.5 + 600606. It’s just a tiny (by cosmic standards) bulge in the colossal Soul Nebula in the constellation Cassiopeia. But, although this part of the cloud seems insignificant, for scientists it has become an excellent place to search for interesting information about the birth of new stars.

This is because other objects with a strange name were found inside J025157.5 + 600606: FrEGGs – freely floating evaporating gas globules. They were found quite recently, and a certain set of conditions is required for the existence of such globules.

Stars in large clouds (you can think of them as “manger”) are formed from cold clumps of dense molecular hydrogen, which collapse under the influence of their own gravity. Therefore, stars are born only in truly dense molecular clouds.

When a very massive hot star begins to glow, its intense ultraviolet radiation ionizes the cloud in which it was born, creating a large, hot bubble of ionized gas called the Stromgren Sphere.

FrEGGs are dense clumps of colder gas clustered in the Stromgren sphere, and many of them actively form their own stars. The boundary between FrEGG and the sphere is visible in the Hubble photograph as a luminous magenta region, as heat from the hot star photo vaporizes the outer layer of gas. 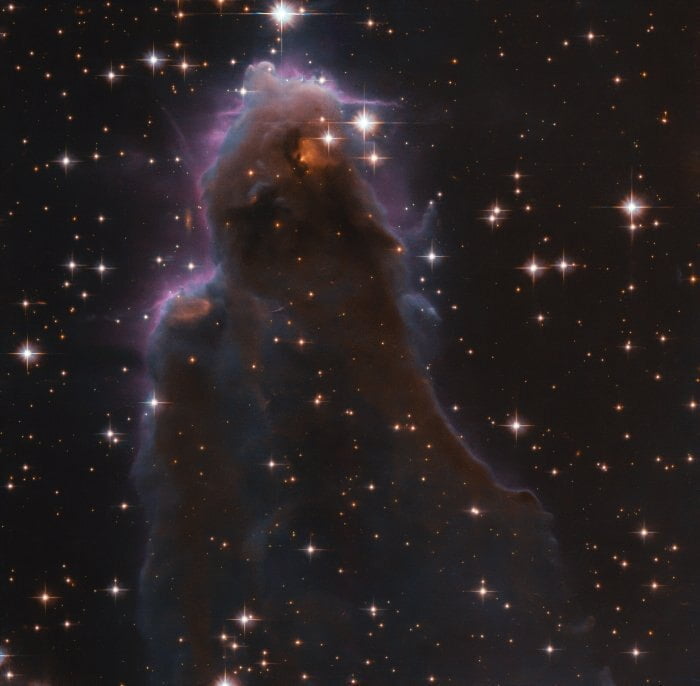 This loss of density means we can look inside and see young stars being born. Since the FrEGGs themselves are still very dense, this process does not stop the star formation taking place inside. But in the end, he still interferes with him, limiting the supply of gas that would fuel the process of star formation.

For this reason, stars born inside FrEGG have relatively low masses compared to much more massive O and B stars. But that’s not necessarily a bad thing. Smaller and cooler stars have a much longer lifespan than their more “tenacious” siblings. Perhaps billions of years ago our Sun was born in this way.