The pair, collectively known as Arp 94, is relatively close, at a distance of 50 to 60 million light years in the constellation Leo.

A close look at the region between the two galaxies reveals faint tidal streams of gas and dust that bind the pair in their gravitational dance.

NGC 3227 is a Seyfert galaxy, a type of galaxy with a very active nucleus. Seyfert galaxies contain supermassive black holes in their cores.

As matter spirals into the black hole, it ejects a huge amount of radiation along the black hole’s axis of rotation, which gives the galaxy its active core.

Hubble looked at NGC 3227 and 3226 as part of a program to measure the mass of black holes by observing the dynamics of gas at the centers of bright clusters of galaxies.

The red in this image represents both visible red and near-infrared light. 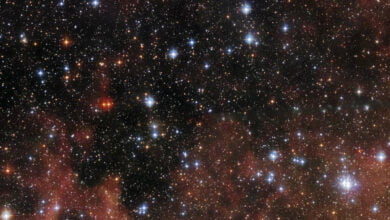 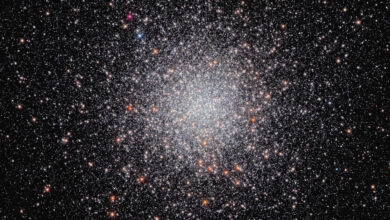 Hubble captured the stars of the globular cluster NGC 6440