(ORDO NEWS) — Our planet is undergoing dramatic changes. Ice caps are melting, hurricanes and storms are getting more intense, places are subject to more severe flooding, wildfires are becoming more frequent, severe droughts are destroying all water sources – the list goes on and on.

Many organizations and institutions are now monitoring what is happening in the world in terms of climate, and NASA is one of the largest among them. Over the years, NASA has used its space technology to monitor thousands of locations around the world for signs of global climate change.

For this purpose, he even launched the website Images Of Change, which documents “before and after” events from various places on earth, highlighting the melting of glaciers, the results of wildfires, deforestation, extreme droughts and a number of other phenomena.

Here are some of the most notable changes recorded over the years and decades, which you can see by scrolling below. “At the rate at which we are seeing this decline,” said a NASA scientist. Joey Comiso: “It is very likely that the summer Arctic sea ice will completely disappear within this century.” 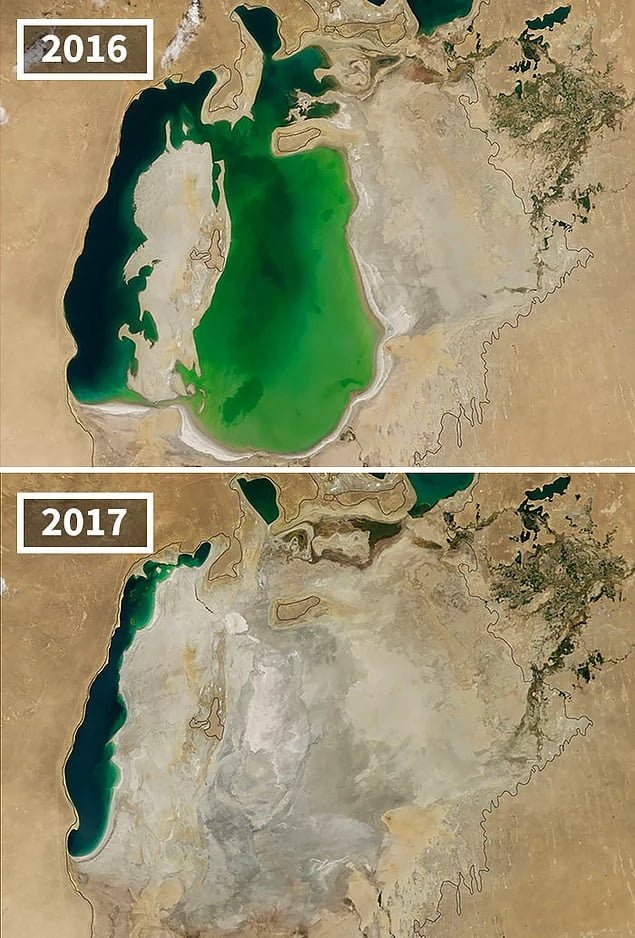 “The Aral Sea was the fourth largest lake in the world until the 1960s, when the Soviet Union began diverting water from the rivers that fed the lake to grow cotton and other crops in the arid plains of Kazakhstan, Uzbekistan and Turkmenistan. The first outline shows the approximate coastline of the lake in 1960. By the time the 2000 image was taken, the North Aral Sea had separated from the South Aral Sea, which itself split into an eastern and a western part. The dam, built in 2005, helped the north sea to recover much of its water level from the south sea. The arid conditions of 2014 caused the eastern part of the South Sea to dry up completely for the first time in our time. The loss of the restraining influence of such a large body of water has resulted in colder winters in the region and hotter and drier summers. 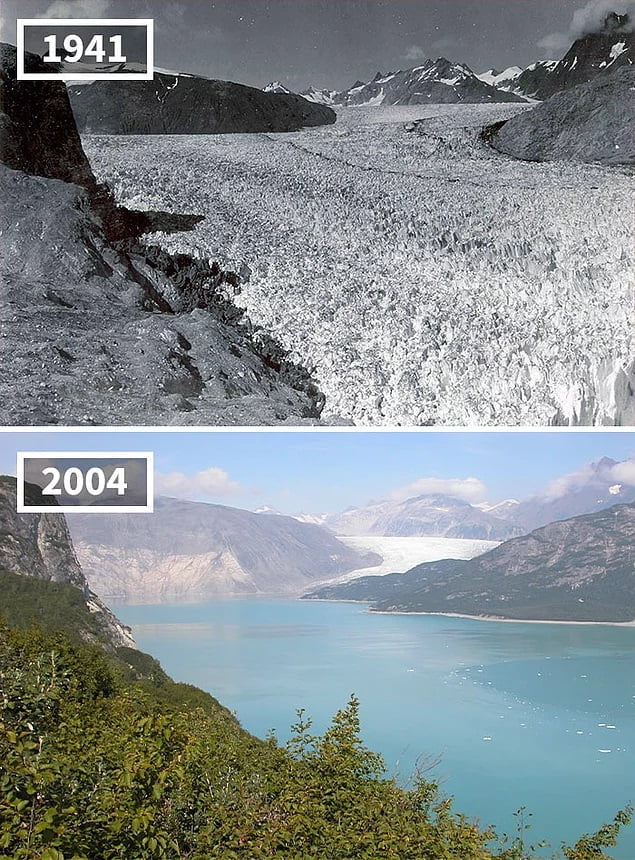 “The 1941 photograph shows the lower reaches of the Muir Glacier and its tributary, the Riggs Glacier. Two glaciers fill Muir Bay. In the 2004 photograph, the Muir Glacier, which has continued to retreat for almost two centuries, is located about 7 km to the northwest, out of sight. The Riggs glacier retreated by about 0.6 km. Both glaciers have significantly thinned.” 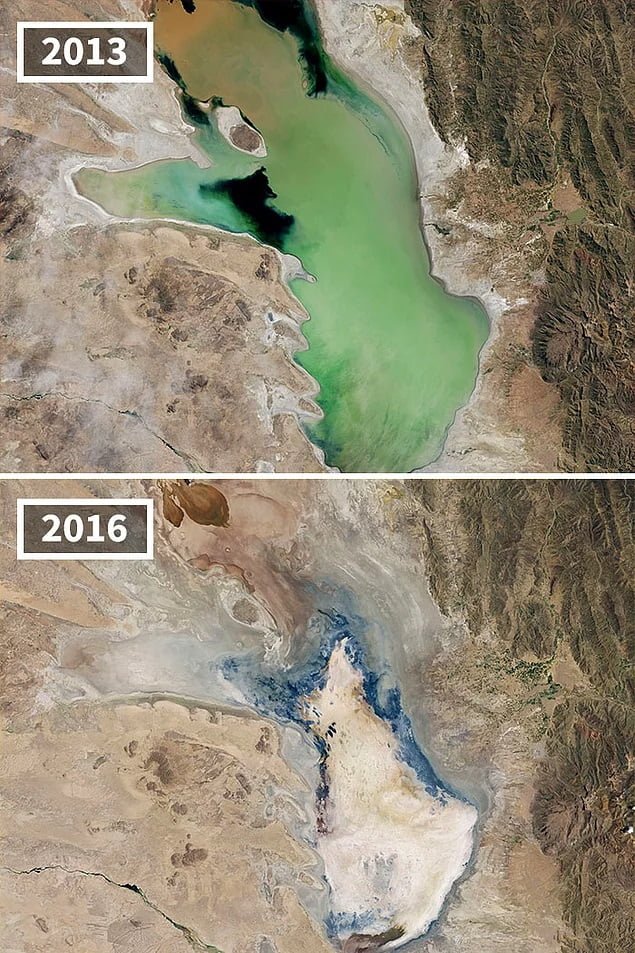 “Lake Poopo, Bolivia’s second largest lake and an important fish resource for local communities, has dried up again due to drought and diversion of water sources for the mining and agricultural industries. It last dried up in 1994, after which it took several years for water to return and even more time for ecosystem restoration. During wet times, the lake covered an area approaching 3000 square kilometers. Its shallow depth – usually no more than 3 meters – makes it especially vulnerable to fluctuations.” “Prolonged drought, combined with water withdrawals, caused a sharp drop in water levels in Lake Powell. These images show the northern part of the lake, which is actually a deep, narrow, winding body of water stretching from Arizona upstream to southern Utah. Image 1999 shows that the water level is close to full capacity. By May 2014, the water level in the lake had dropped to 42 percent.”

6. Rare snow falls on the outskirts of the Sahara Desert “Snow fell on the edge of the Sahara Desert in northwest Africa in mid-December 2016, which is rare in the region. Landsat 7’s Enhanced Thematic Mapper Plus (ETM +) sensor captured a left white image over a candy-colored landscape southwest of the Algerian community of Ain Sefra, a city sometimes called the gateway to the desert. The snow has completely disappeared except for the highest elevations, as shown in the right image from Landsat 8. The last snowfall in Ain Sefra occurred in February 1979.” “As a result of the collapse of the glacier tongue on July 17, 2016, a huge stream of ice and rocks fell down a narrow valley in the Tibetan Aru Ridge. Nine people in the remote village of Dungru were killed along with their flocks of 350 sheep and 110 Yaki. The ice avalanche, one of the largest ever recorded, left debris 30 meters thick over an area of ​​10 square kilometers. The cause of the collapse is still unknown.” 9. Bering Sea at an all-time low 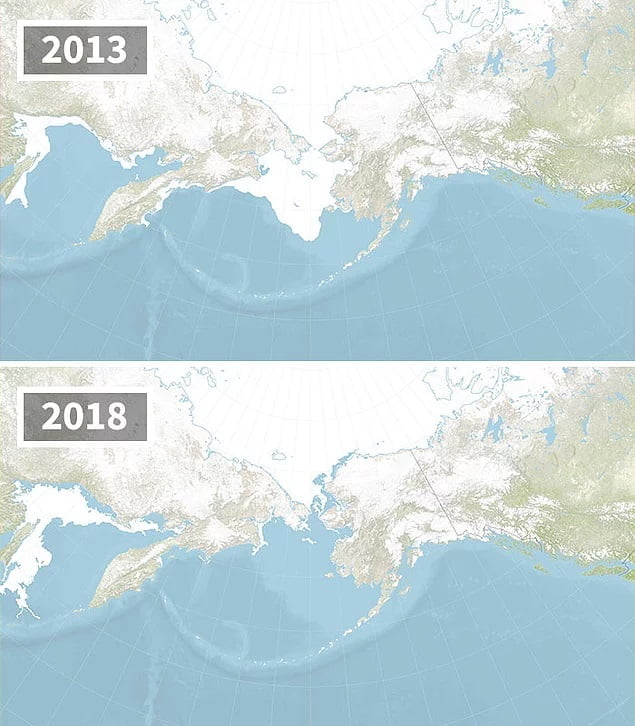 “In the winter of 2017-18, less ice formed in the Bering Sea than in any winter since the written records appeared in 1850. Ice usually covers over 500,000 square kilometers of the sea at the end of April. The ice extent at that time in 2018 was only about 10 percent of normal. Changes in when and where sea ice melts could affect phytoplankton blooms, which in turn could affect the entire Bering ecosystem. Water absorbs more energy from the Sun than ice, which contributes to the warming of the planet.”

10. Reduction of glaciers in New Zealand 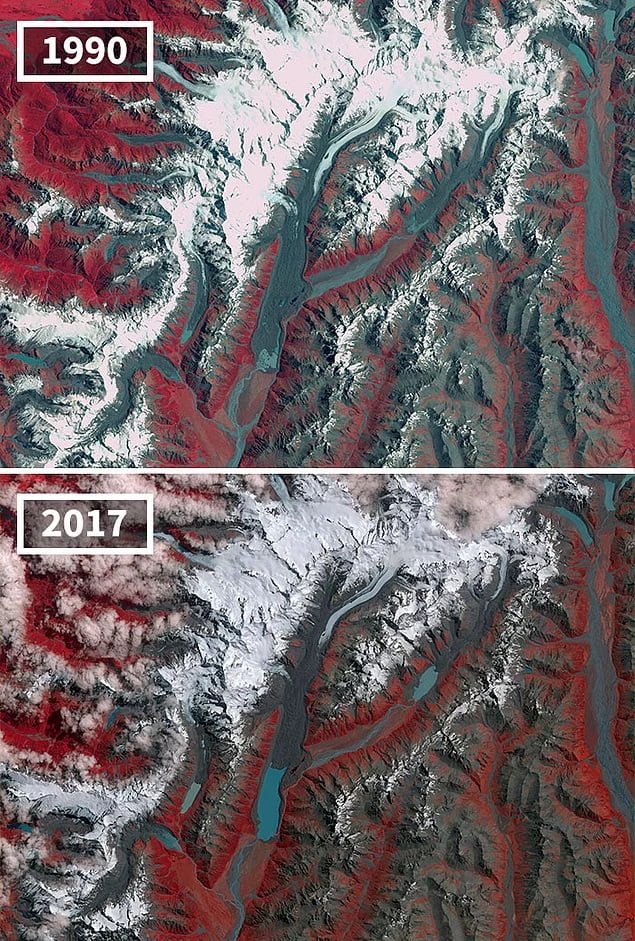 “New Zealand has over 3000 glaciers, most of which are in the southern Alps of the South Island. Glaciers have been retreating since 1890, but with short periods of growth. In 2007, scientists at the National Institute of Water and Atmospheric Research (NIWA) attributed this change mainly to global warming. According to them, without a significant cooling of the climate, the glaciers will not return to their previous size. The differences between 1990 and 2017 can be seen in these images, which include the Mueller Glacier, the Hooker Glacier and the Tasman Glacier, the longest in New Zealand.”