(ORDO NEWS) — 12,000 years ago, before the invention of pottery, metallurgy, writing and the wheel, and, in fact, before the Neolithic revolution, society in the territory of modern Turkey mined, transported and lifted stones weighing up to 20 tons. But how did they do it?

If someone asked you when multi-ton megalithic monuments began to appear on Earth, what would you answer? Pyramids of Giza? For many people, this may be true, but the truth is that long before the first Egyptian pyramids, people on Earth were building intricate multi-ton stone monuments using blocks weighing tens of tons.

History as we know it is incomplete. 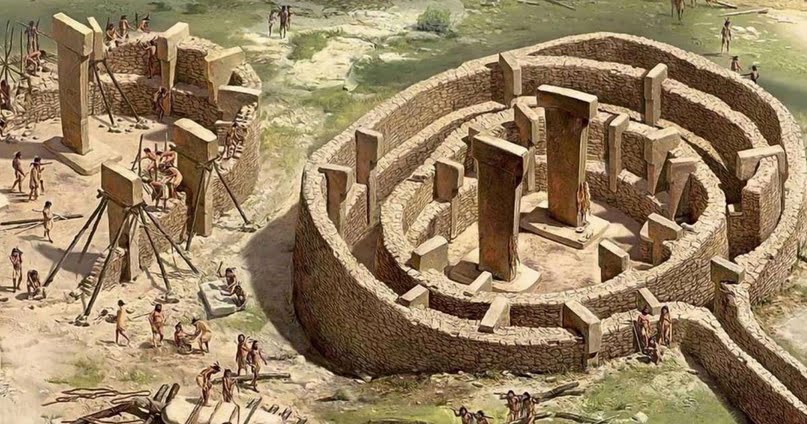 Not in the sense that there is a conspiracy around it, but in the fact that the path of mankind on Earth is so vast that we still have not been able to fully reveal it. Many new discoveries help us to rewrite many facts that until recently were considered unchanged.

And what better way to rewrite history than physical evidence? You see, our history is written in stone.

The remnants of great societies, though buried for millennia, still exist. These are not necessarily pyramids, but much lesser-known ancient structures that are scattered around the world.

One particular place in modern Turkey is unlike any other.

It is called Göbekli Tepe, and its name translates as “bellied hill”.

Located near the modern city of Sanliurfa, this site is buried under the surface of the earth. 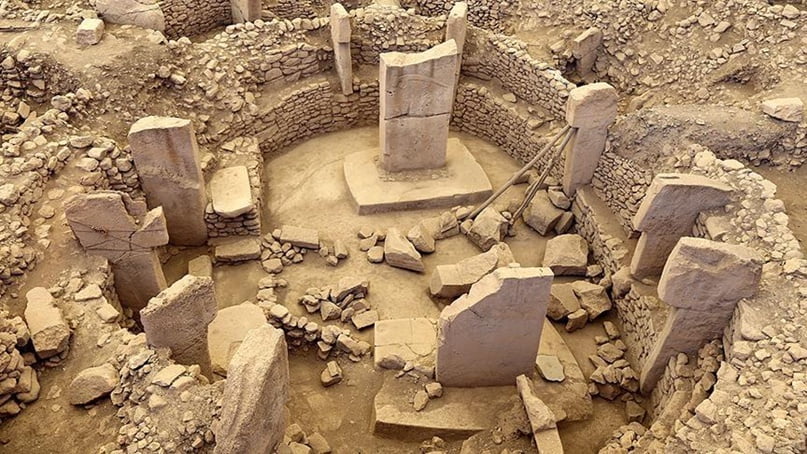 Geological studies left experts shocked not only by its complexity, but also by its enormous size.

Nothing like it has been found anywhere in the world. As of June 2020, Göbekli Tepe has over 200 stone pillars buried below the surface (most of them) in 20 clearly marked circles.

These pillars are massive; their average height reaches 6 meters, and their weight is 10 tons. Set in nests previously carved into the local rock, the T-shaped stone pillars are Göbekli Tepe’s most unique feature.

Although the site is still far from being fully excavated, what archaeologists have found to date points to an unpredictable archaeological discovery poised to change the history of early societies on Earth. 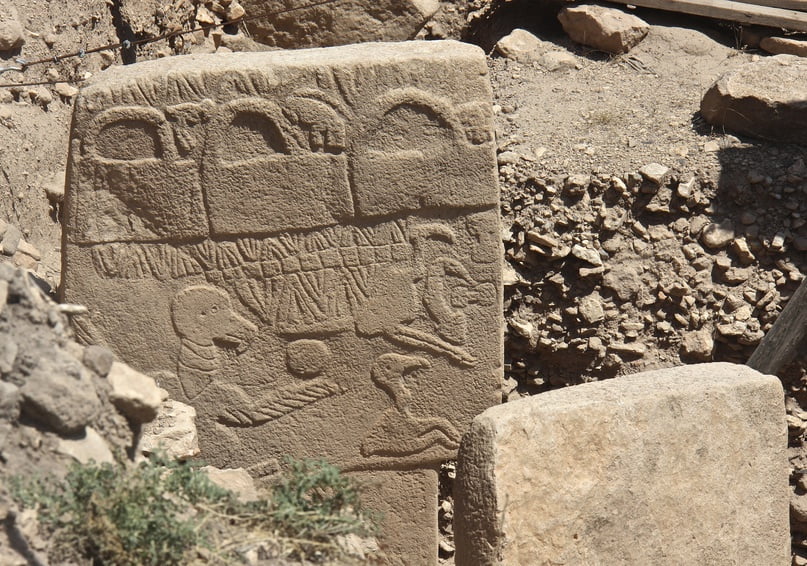 Mainly because from the layers excavated by specialists, it was possible to establish that the most massive stone pillars of Göbekli Tepe belong to the period called the Pre-pot Neolithic A (PPNA) (in the early Levantine and Anatolian Neolithic culture), which dates from about 12,000 to about 10,800 years ago, that is, from about 10,000 to 8,800 years ago.

At a time when other societies were building adobe dwellings, the people of Göbekli Tepe were working massive stone blocks weighing between 10 and 20 tons, building on a scale never seen before.

Klaus Schmidt, one of the most famous excavators of the site, discovered two phases of occupation at Göbekli Tepe, the oldest of which can be traced back to about 10,000 BC. This means that already 12,000 years ago, the society that built Göbekli Tepe was ahead of its time, at least in the construction and organizational sense. 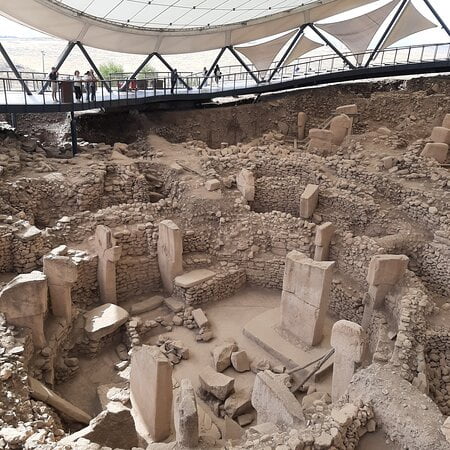 Its true purpose remains a deep mystery, although various theories suggest that Göbekli Tepe was either a massive ceremonial site – which would make it the oldest known megalithic temple on Earth – or an early astronomical observatory.

Experts such as Schmidt suggest that the site was used in a religious or ceremonial sense, with people from vast distances coming here to pay their respects. Be that as it may, the impressive stratigraphy at this site bears witness to several centuries of activity, the earliest of which occurred during the Presoil Neolithic of A.

The history of this site has been divided into three separate stages, which experts have designated as layers III, II and I.

Layer III represents the oldest stage. At this stage, according to experts, there are distinct circular connections of Göbekli Tepe with a diameter of 10 to 30 meters. 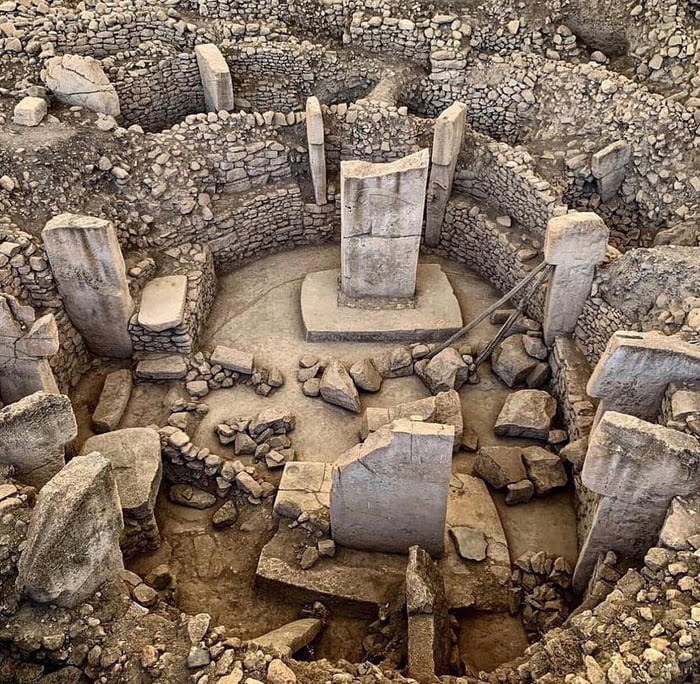 It was at this stage that the most remarkable features of the object appeared – limestone blocks in the shape of the letter “T”.

Most of Göbekli Tepe’s unique pillars are adorned with a series of abstract, enigmatic pictograms, many of which depict animals. Some elements on the pillars have been interpreted as symbols that are found in Neolithic rock paintings in various places.

Among the animals depicted on the pillars, experts found bulls, lions, snakes, reptiles, birds and vultures.

It is believed that 12,000 years ago, when the most ancient parts of the site were built, a wide variety of wild animals lived in the vicinity of Göbekli Tepe.

The stones used in the construction were brought from nearby quarries, the most remote of which was at a distance of no more than 1,000 meters.

Despite the short distance, it remains a deep mystery how ancient people 12,000 years ago were able to mine, transport and lift tons of blocks weighing 10 or 20 tons into place. 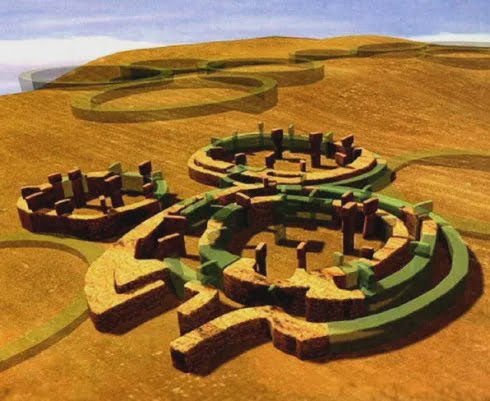 It should be taken into account that the people who built Göbekli Tepe did it without the help of pack animals or technologies such as a pulley or a wheel.

Göbekli Tepe is so ancient that it predates pottery, metallurgy, the invention of writing or the wheel, and, in fact, the Neolithic revolution.

In one of the quarries not far from this place there is a massive block of stone, the weight of which is estimated at about 50 tons. Although the ancients did not use it in construction for a reason unknown to us. Most likely, they had the means to transport and lift it. If they carved it, they surely must have figured out how to move it.

Everything we know about Göbekli Tepe tells us that already 12,000 years ago there were developed societies on Earth, and not just hunter-gatherers.

Everything we know about this site is preliminary, since no more than 5% of the territory of Göbekli Tepe has been excavated.

Future generations of archaeologists will help unlock the site’s secrets, but from what we’ve found to date, Göbekli Tepe is a place like no other.

Remember that Göbekli Tepe was not built in a day, and it likely took several generations to complete the construction of the site, which was deliberately buried around 8,000 BC.

Yes, Göbekli Tepe changes everything, and I see this place as a monument that has the same impact as the Great Pyramid of Giza, in a historical and architectural sense.