(ORDO NEWS) — The activity of scientists was not without high-profile scandals.

An international team of astrophysicists has captured a stream of mysterious cosmic signals from a single radio source. We are talking about a series of fast radio bursts. For 47 days, scientists have registered more than 1.5 thousand such signals.

A fast burst is a flash that lasts a fraction of a second, but its power is comparable to the energy of a thousand Suns. Now astronomers around the world are trying to understand the nature of the mysterious signs and determine where they occur.

About half a century ago, the Puerto Rican observatory in Arecibo launched a special space radio signal. He was sent towards M13 – the so-called cluster in the constellation Hercules.

“The star cluster M13 is the best studied. There are the most so-called exoplanets – planets on which the origin of life is possible,” says aerospace engineer Georgy Lisitsin, an employee of the Museum of Cosmonautics.

The signal lasted only 169 seconds, but astronomers managed to transmit all the most important information about the Earth. The message consisted of seven parts.

“Each of them had some meaning. They transmitted 10 digits in a certain number system, conveyed knowledge about the simplest elements that make up the Universe, about the human genome, about people in principle – who we are and how we live,” says Lisitsin.

The purpose of Arecibo’s message is to show potential inhabitants of other planets that they are not alone in the Universe. But aliens would have to work hard to decipher.

“When the signals were given to decipher to people who were not interested in the project, no one could cope with the task,” says astrophysicist Alexander Belokon.

It is also not necessary to count on a quick response from space. Only in one direction the message will go 25 thousand years.

There is a high probability that during this time the cluster of stars M13 will change position. However, even if he reaches his destination, it is not certain that the earthlings will be able to accept the answer.

“The signal will fly for at least 50 thousand years. It remains to be hoped that the transmitter is more powerful at the other end of the” wire “, – Lisitsin notes.

From “Mir” to indecent portraits

The authors of the Arecibo message – American astronomers Francis Drake and Carl Sagan – were not pioneers in this area.

“The first message was sent by the Soviet Union in 1962. It is believed that in a test version to check the radar between Earth and Venus, the message contained the words “Mir”, “Lenin” and “USSR” written in Morse code,” explains Belokon.

The Americans sent their first “letter” into space only 10 years later. In 1972, they placed information plates on the Pioneer 10 interplanetary station. This device was the first in history to reach the third space velocity, which allows ships to leave the solar system. Pioneer 10 wafers were covered with a hydrogen atom emission scheme.

“In the Universe, most of the visible matter is represented as neutral hydrogen, which emits only at one frequency, at a wavelength of 21 centimeters,” Belokon comments.

There were no incidents. When the image of the plates was published by newspapers, NASA accused scientists of sending pornography into space. The fact is that along with the hydrogen atom, an image of people without clothes was applied to the plate. They wanted to acquaint potential “neighbors” with the appearance of earthlings.

The main goal of Pioneer 10 was considered to be the study of Jupiter, so the station had to work for about three years. As a result, the connection was maintained for 30 years. The last signal was caught in January 2003. Now the station is moving towards the star Aldebaran.

“Similar messages were sent to Mars. Take at least the Perseverance rover. There are images of dinosaurs, a message from doctors and a huge number of essays by schoolchildren who came up with a name for the spacecraft,” Lisitsin points out. 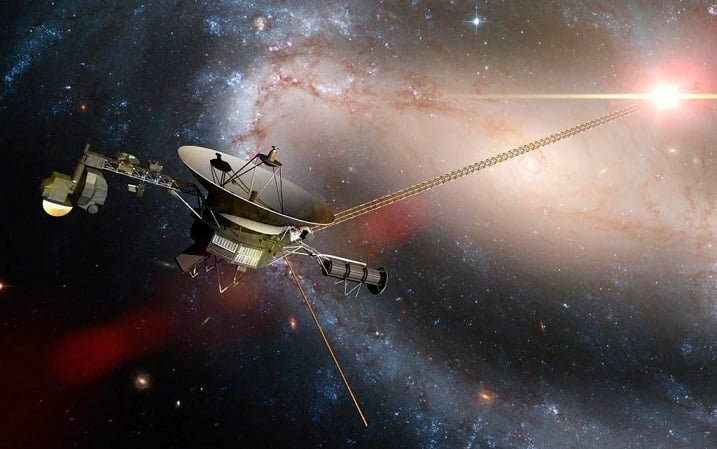 Voyager 1 and Voyager 2 hold the largest messages. In the late 1970s, Jupiter, Saturn, Uranus and Neptune lined up in an arc. This is a very rare configuration of celestial bodies. Astrophysicists seized the opportunity and launched vehicles to them, which first visited all four planets, and then left the solar system.

“They carry plates that show a brief history of mankind, DNA, the position of the Earth in our galaxy, the appearance of a person, representations in all languages, and so on,” says Belokon.

Because of the Pioneer 10 scandal, the commission spent almost a year selecting photos and diagrams for a new message. Three-quarters of the records on the disc were musical works: masterpieces by Bach, Beethoven, Stravinsky, Mozart and Louis Armstrong. But this time it was not without criticism.

“The plates show the Solar System with a map of the Voyager flyby. They used an arrow to indicate the direction of the flight. But the arrow is an anthropocentric symbol. It is understandable only to communities that have passed the hunting and gathering stage, because it depicts a bow arrow,” says Belokon.

Practicality instead of romance

The last spacecraft to leave the solar system was launched in 2006. This is the American interplanetary station New Horizons. It has already passed Pluto and is now moving towards one of the Kuiper Belt objects. Alas, there is no longer a special message for aliens on the spacecraft.

The era of the romanticization of space has passed, giving way to practical interest. The chances of meeting intelligent life in the Universe are negligible, and even more so to get an answer.

Scientists received a signal from the “Dark Age” of the Universe

Scientists received a signal from the “Dark Age” of the Universe