(ORDO NEWS) — As children, we learn that numbers can be either even or odd. There are many ways to classify numbers as even or odd.

Or we can divide the number by 2 – where any integer result means the number is even, otherwise it must be odd.

Similarly, when working with real world objects, we can use mate. If we have an unpaired element left, this means that the number of objects was odd.

So far, even and odd categorization, also called parity classification, has never been demonstrated in non-human animals.

In a new study published Friday in the journal Frontiers in Ecology and Evolution, we show that honey bees can learn to do this.

Why is parity classification special?

Parity tasks (such as even and odd categorization) are considered abstract and high-level numerical concepts in humans.

Interestingly, people show accuracy, speed, language, and spatial relationships when they classify numbers as even or odd.

We also classify even numbers faster and more accurately than odd numbers. Research has shown that children tend to associate the word “even” with “right” and “odd” with “left.”

These studies indicate that people may have learned biases and/or innate biases about even and odd numbers, which may have arisen either through evolution, cultural transmission, or a combination of both.

It is not obvious why parity might be important beyond its use in mathematics, so the origin of these biases remains unclear.

Understanding whether and how other animals can recognize (or learn to recognize) even and odd numbers can tell us more about our own history with parity.

Teaching bees to recognize odd and even numbers

Research has shown that bees can learn to order quantities, perform simple addition and subtraction, match symbols with quantities, and correlate concepts of size and number.

To teach the bees the parity problem, we divided the bees into two groups. One group was trained to associate even numbers with sugar water and odd numbers with a bitter-tasting liquid (quinine). 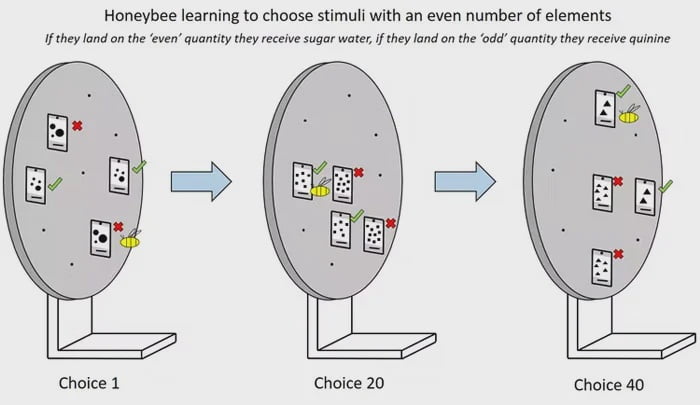 An illustration of how the researchers trained bees to associate even-numbered stimuli with rewards. (Scarlett Howard)

We trained individual bees by comparing odd and even numbers (with cards that showed figures from 1 to 10) until they chose the correct answer with 80 percent accuracy.

Their propensity to learn odd numbers was the opposite of humans, who classify even numbers faster.

Our results showed that the bee’s miniature brain is able to understand the concepts of “even” and “odd”.

Thus, the large and complex human brain of 86 billion neurons and the miniature insect brain of about 960,000 neurons could classify numbers by parity.

Does this mean that the parity problem is less difficult than we previously thought?

To find the answer, we turned to biological technologies.

– Artificial neural networks were one of the first learning algorithms developed for machine learning.

“Inspired by biological neurons, these networks are scalable and can solve complex recognition and classification problems using propositional logic.

We have created a simple artificial neural network consisting of only five neurons to perform a parity test.

We gave the network signals from 0 to 40 pulses, which it classified as even or odd. Despite its simplicity, the neural network correctly classified pulse numbers as even or odd with 100 percent accuracy.

This showed us that, in principle, parity classification does not require a large and complex human brain.

However, this does not necessarily mean that the bees and the simple neural network used the same mechanism to solve the problem.

We don’t yet know how the bees were able to solve the parity problem. Explanations may include simple or complex processes. For example, bees could:

– combined elements into pairs to find an unpaired element

– counted each element, and then applied the even / odd rule to the total.

By teaching other animal species to distinguish between even and odd numbers and to perform other abstract mathematical operations, we can learn more about how mathematics and abstract thinking appeared in humans.

Is the discovery of mathematics an inevitable consequence of intelligence? Or is mathematics somehow related to the human brain? Are the differences between humans and other animals really smaller than we previously thought?

Perhaps we can gain this intellectual knowledge if we only listen in the right way.

Male fertility is declining worldwide. What happened and how to deal with it?

Male fertility is declining worldwide. What happened and how to deal with it?