(ORDO NEWS) — Mark Laplum is an artist and independent researcher who creates reconstruction drawings of ancient humans with elongated skulls.

Mark, how did you get interested in elongated skulls and why did you decide to reconstruct the appearance of these people?

In 2006, when I first downloaded Google Earth, I looked around familiar places and then headed south to Lake Titicaca. I was shocked by what I saw.

The ruins of something huge covered every hilltop for miles in every direction. I knew that something incredible happened there, but I put it out of my mind, finding no interest in anyone with whom I tried to share it. 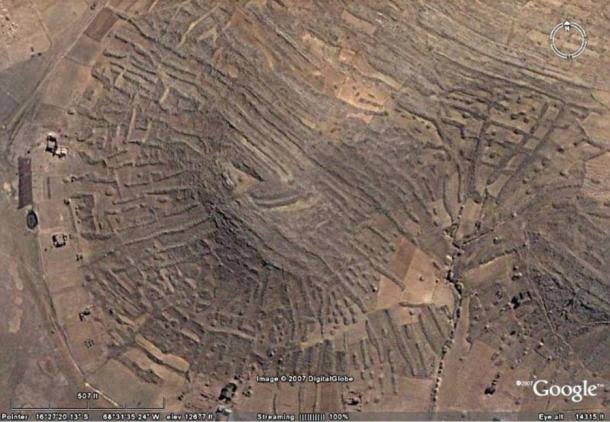 About six years later, I saw one of Brian Foerster’s posts featuring elongated skulls. I was lucky enough to get in touch with him and talk a bit about what I’m looking at.

Looking at the images of the skulls, I became curious about who these people were and what they looked like. There were almost no interpretations of their appearance and almost nothing about their history.

My instant sense of belonging made me wonder what I could do to help him advance our understanding of these people. Although I hadn’t picked up a pencil in 14 years, I was confident that I could draw them to recreate their faces, to see what they looked like.

I dropped out of art school but continued to make art in many different ways for 18 years, culminating in large sculptural projects in the mid-nineties, after which I stopped painting and creating. 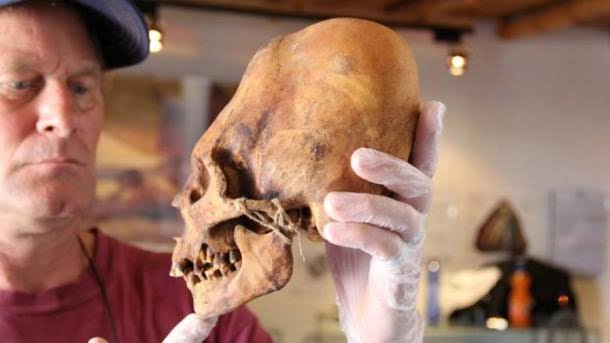 In the meantime, back to the skulls, I started doing research on the Internet and archives, collecting images of elongated skulls and drawing. To date, I have made over 5,000 drawings and collected over 18,000 photographs of skulls, mummies and related artifacts.

While working with this incredible data and creating the drawings, the lack of understanding, history and myths about who these people were and what they looked like did not give these attempts a sense of completion.

There were so many unanswered questions that I thought maybe that’s why so few people can participate in a project like this. It’s like a wall so big you don’t notice it or don’t want to admit it’s there.

When I started this research in 2011, the number of skulls was known to very few people who actually knew about it. According to their estimates, there were several hundred skulls. But through internet searching, I found literally thousands of skulls!

In Romania, Bulgaria, Russia and Chile, there are about a thousand more skulls that are not yet available to the public. More skulls remain unknown as they have not been photographed (or at least not in the public domain) and therefore not available for public viewing in Chile and Peru. 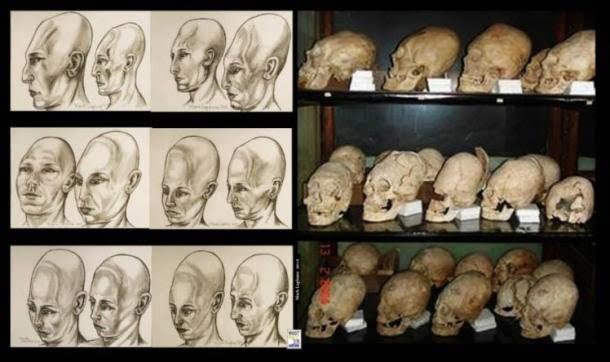 Representatives of academic science, as a rule, are dismissive of elongated skulls. They consider them to be nothing more than artificially deformed human skulls – the result of intentionally tying the head together to achieve a flattened shape.

In addition to this “artificial head modification” thesis, they sometimes refer to a medical problem called hydrocephalus. Why do you think scientists hold this point of view? What evidence do they have?

Stretched skulls are never spoken of without the term “head binding”. This is a chorus about a leaky bucket, from which there is no escape. But now there are those, and I don’t mean just researchers, but obviously people, who have woken up from the layers of lies we’ve been fed from the start.

Many who look at evidence of anomalies in skulls are not satisfied with believing in the dogma of skull modification.

People like Brian Foerster, Lloyd Pye, Graham Hancock, not to mention Michael Cremo, study and record evidence, not stories created by previous researchers, textbooks, and other traditionalists. The point is to keep asking questions.

The verbal notion of “binding” is a collective projection. The reality is that 99% of those who talk about it have never examined an elongated skull with their own eyes. I don’t know how it’s so common, other than it keeps repeating itself.

The usual approach to elongated skulls is dominated by concepts, but the forms of the skulls are not linguistic but morphological. My work was an attempt at a gentle rebuttal, a disclosure of my process of study and drawing, which includes an idea of ​​the appearance of these people.

I do not rely on classical authorities. In my work, the skulls speak for themselves. To speak is a projection, and to see is to receive. And no one can answer questions that only you yourself can experience at the level of vision. This is why my approach to elongated skulls is not driven by the dogma “elongated = deformed”. 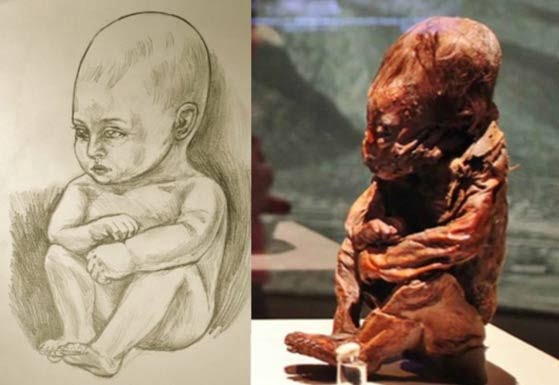 Are there significant skulls that leave no doubt that the “artificial warp” paradigm is wrong? How are these skulls different? Are there differences among the elongated skulls themselves? Can they be grouped according to shape and other features?

For the first question, look at these skulls on display at the Ica Museum in Peru.

There are problems with the official history, which goes back to Hippocrates defining the Huns as people who supposedly used binding to deform their skulls. She claims that all these skulls are just artificially modified skulls of modern people.

The fact is that many of them had larger eyes, as well as a 25% larger brain body than modern people. In addition, they had taller ears, up to 2 cm higher than usual. 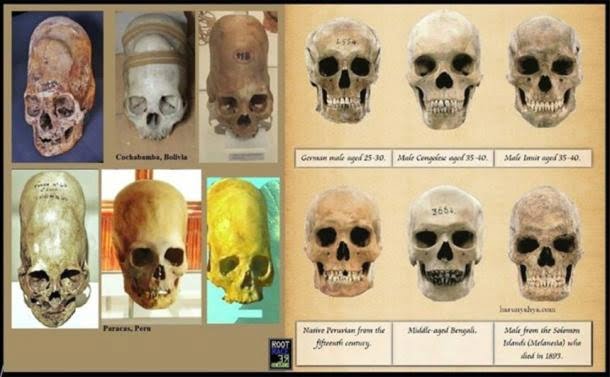 The cranial sutures are different from each other. There are mysterious holes in the back of the skull. An additional plate above the occipital bone, known as the “bone of the Incas”… There is also a problem with babies that have been found in Peru and the Andes with a set of three-year-old modern human teeth. Most parents know that baby teeth are unheard of. 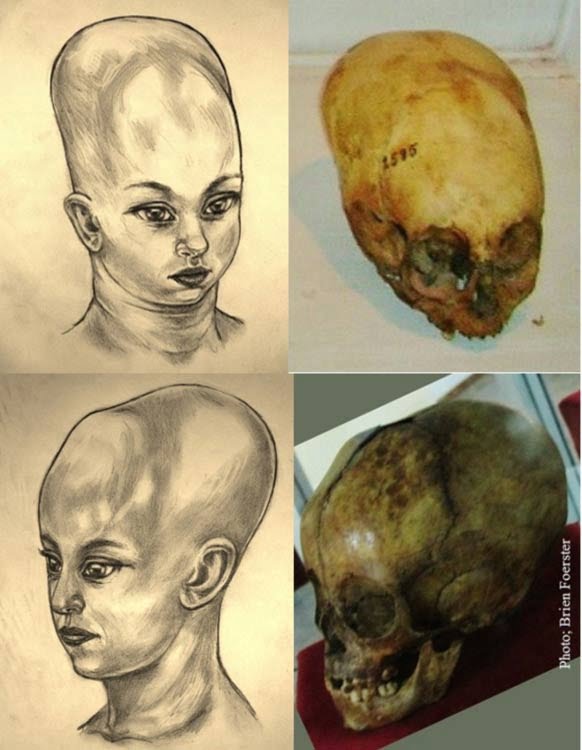 There are various categories or types in South America. Perhaps it is, but I do not delve into the Spanish terminology. For me, it’s just another way to separate the individual characteristics from the vision of the skull.

I tend to say “they had variety” like the inexplicable red head that happens to show up in the family line. Likewise, the elongated, the Huns… were wild in that sense. They had a greater scatter, apparently, morphological manifestations. 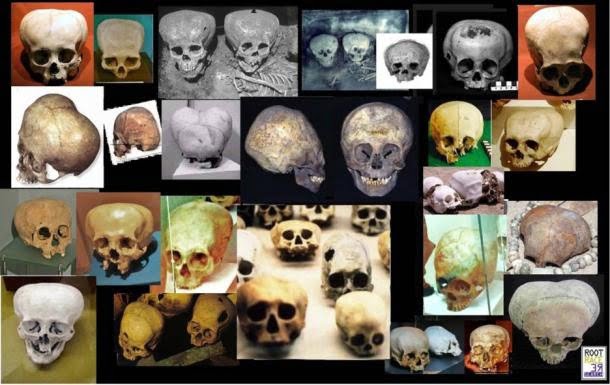 As far as connections between the Americas and Eurasia are concerned, the elongated skulls from these regions are so similar that sometimes they can only be distinguished from each other by the background, or coating on the skulls.

Do you rely on any anthropological or forensic facial reconstruction techniques? Or more generally – how do you imagine the appearance of these people?

The organs come together to form the overall “body” of the head. Drawing the same skull from different angles tends to smooth out mistakes. The form arises in unison with the elements of bones, muscles and skin. Basically, bones define most of a person’s face, so accuracy is hopefully inevitable.

How do you fund your research? What are your plans for the future?

There is a certain need for funding. When and if funding becomes available, it will greatly facilitate the study and presentation of the elongated skulls, as well as broaden our understanding of the historical significance of these individuals.

It’s been a somewhat slow awakening, but I think my drawings have gotten better. At first they were not good at all, although it was not bad at a time when we had almost nothing to see.

My drawing work continues. I now hope to gain research access to the archives of museums in Boston, Philadelphia and Chicago. To see firsthand the skulls from Peru and hopefully photograph their collection of Peruvian skulls.

I am also working on creating an illustration book that will feature images of skulls and reconstruction drawings. In order to get a more accurate picture, studies will be needed in Eastern Europe as well as in the Andean region.