(ORDO NEWS) — The NASA/ESA Hubble Space Telescope has discovered that the peculiar small galaxy is one of the most incredible examples of galaxies with extremely low abundances of metals (elements heavier than hydrogen and helium).

This suggests that the galaxy’s chemical composition has barely changed in over 13 billion years.

The galaxy under study is about 20 million light-years away, making it the closest example of an extremely low metallicity “stellar factory” to Earth.

The diameter of the find is 1200 light years, which is very small for a galaxy. For example, there are larger nebulae in the Milky Way, and the diameter of our Galaxy is estimated at 100,000 light-years.

During the cataloging process, the galaxy was designated HIPASS J1131-31, but astronomers gave it another nickname: the Peekaboo Galaxy.

Such an unusual name is due to the fact that for decades the galaxy seemed to be hiding behind a bright, fast-moving star, and then “suddenly jumped out” to be noticed.

Shortly after the Big Bang , only hydrogen and helium were present in the universe (with a small admixture of lithium).

All other elements, called metals in astrophysics, were formed after the very first stars went supernova (exploded).

These supernovae “polluted” the host galaxies and led to the formation of new stars and planetary systems, which are not observed today.

But the Peekaboo galaxy hasn’t experienced much of this, and for that reason has remained metal-poor all this time.

“We didn’t realize at first how unique this little galaxy was,” said Berbel Koribalski , an astronomer with Australia’s national science agency CSIRO and co-author of the study.

“Now, with combined data from the Hubble Space Telescope, the South African Large Telescope (SALT) and others, we know that the Peekaboo galaxy is one of the most metal-poor galaxies ever discovered.” 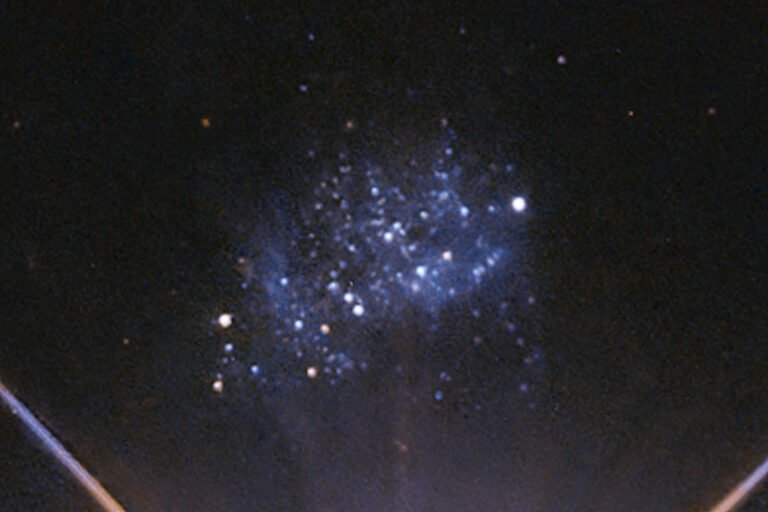 The telescopes that Koribalski mentioned made it possible to study the composition of 60 random stars in this tiny galaxy.

It turned out that they are all relatively young, their age is a few billion years or less, unlike many stars observed in the local universe.

All this suggests that the Peekaboo galaxy is a great opportunity to get closer to the early Universe.

“Thanks to Peekaboo’s proximity to us, we are able to make observations, taking advantage of the opportunity to see in unprecedented detail the environment resembling the early universe,” added Gagandeep Anan, an astronomer at the Space Telescope Research Institute (STScI) and co-author of the study.