(ORDO NEWS) — Thanks to the European Space Agency’s (ESA) Mars orbiter ExoMars Trace Gas Orbiter (TGO), a team of scientists have made a spectacular discovery : huge deposits of water in a giant canyon system called the Mariner Valley.

The high resolution epithermal neutron detector (FREND) installed on the TGO recorded a high hydrogen content in the upper layers of the soil, located at a depth of about one meter from the surface. The Mariner Valley is an unexpected place for water deposits, as it was usually found in the polar regions of the planet in the form of ice.

“With TGO, we can look down one meter below this dusty layer and see what actually happens below the surface [of the topmost soil layer] of Mars,” said Igor Mitrofanov, a researcher at the Russian Academy of Sciences and lead author of the study.

FREND discovered a vast area with unusually high hydrogen content. If we assume that the hydrogen that has been recorded is associated with water molecules, then about 40% of the near-surface material in this region, apparently, falls on frozen water.

The area of ​​high hydrogen concentration is so vast that it is comparable in size to the Netherlands. This is a promising place to find even more water in the future.

“We found that the central part of the Mariner Valleys was filled with water – much more than we expected,” said Alexey Malakhov, co-author of the study. “This is very similar to the permafrost regions on Earth, where, due to constantly low temperatures, water ice is regularly present under dry soil .” 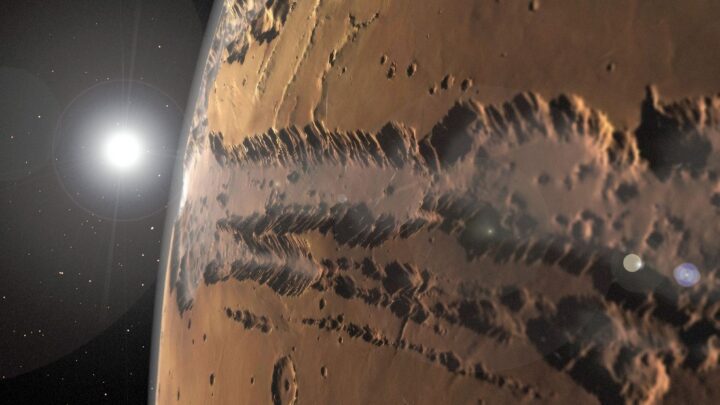 “This discovery is an amazing first step, but we need more observations to know exactly what form of water we are dealing with,” added study co-author Håkan Sweedhem of ESA’s laboratory in the Netherlands.

This discovery will help us better understand the early evolution of the Red Planet and suggest where to look for traces of hypothetical ancient life.

How did the TRAPPIST-1 planets get their water

How did the TRAPPIST-1 planets get their water