(ORDO NEWS) — Sending people to almost anywhere in space affects areas such as health, nutrition and psychology, which have their own limitations.

The main solution to these problems is to simply put travelers to sleep for the duration of the flight. In a sleep state similar to hibernation or torpor, the metabolism drops and the mind is spared from endless waiting.

A new study by a group of researchers from Chile has found an obstacle that makes hibernation impossible. This study was published in Proceedings of the Royal Society B.

Roberto F. Nespolo and Carlos Mejias of the Millennium Integrative Biology Institute and Francisco Bojinovic of the Pontifical Catholic University of Chile set out to unravel the relationship between body weight and energy expenditure in hibernating animals.

They found a minimal metabolic rate that allows cells to survive in cold, low oxygen environments. For relatively heavy animals like us, the energy savings we might expect from entering a deep hibernation-like state would be negligible.

The word “hibernation” often evokes images of a bear hidden in a den for a long winter’s rest. While bears hide in a den for a few cold months, their hibernation is not quite like the real hibernation among smaller critters such as ground squirrels and bats.

In these animals, body temperature plummets, metabolism slows down, and heart rate and respiration slow down. This process can reduce energy costs by 98 percent.

However, even in this state, the animal can still lose more than a quarter of its body weight as it burns its fuel stores.

If we were to apply the same basic math to a sleeping adult, a daily food intake of around 12,000 kilojoules would be replaced by a need for just a couple hundred kilojoules of fat.

Under this scenario, we can imagine our intrepid space tourist losing just over six grams of fat per day. During the year, this will amount to about two kilograms of weight.

That might be fine for fast travel to Jupiter’s moons, but if the average adult wants to survive decades sailing through interstellar space to the nearest star, they’ll need to pack an extra few hundred pounds of fat. But is it possible?

In addition, the researchers conducted a statistical analysis of different types of sleepers and concluded that the total energy requirements of a person during hibernation will not differ significantly from those when he is just resting. It turns out that hibernation, as one of the hypothetically less expensive ways of traveling for a person, will not bring the expected effect.

Two galaxies accidentally found at the edge of space and time

Two galaxies accidentally found at the edge of space and time 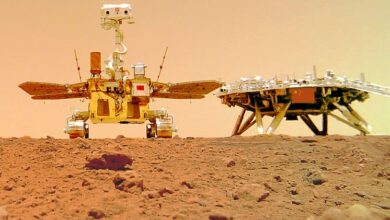