(ORDO NEWS) — Archaeologists have discovered under the sand of the famous site of the construction of the pyramids the remains of the “lost labyrinth”, which was previously considered a mythical structure.

Also known as the Labyrinth, the Pyramid of Hawara (built by Amenemhat III) was the most visited site in the ancient world.

Herodotus claimed that in the 5th century BC he counted three thousand rooms in the burial complex of the pyramids.

Under the surface of our planet, many discoveries have been made that have the potential to change our view of history itself.

One of them is the forgotten world of underground chambers and tunnels that have remained unexplored for centuries.

Mentioned in ancient texts and local legends, these mysterious chambers were considered a myth until they were discovered.

The Lost Labyrinth of Egypt is without a doubt one of those incredible ancient sites that is a lost gem in modern history.

What I have seen is work beyond description. After all, if you put together the buildings of the Greeks and show their works, they will seem less in terms of effort and cost than this labyrinth…

Even the pyramids defy description, and each of them was equal to many and powerful works of the Greeks. However, the labyrinth surpasses even the pyramids. “Herodotus (“History”, book, II, 148). This mysterious underground complex of caves and chambers has been described by authors such as Strabo and even Herodotus, who had the opportunity to visit and record the legendary labyrinth before it disappeared from history.

According to the record of Herodotus I of the 4th century BC, the labyrinth was “located a little above Lake Moiris and almost opposite what is called the city of crocodiles” (“Histories”, book II, 148).

The Labyrinth (as it was called by some in the distant past) is said to be an unusual underground complex that may hold the key to human history. They say that there you can find information about unknown civilizations, great empires and rulers who lived on the planet before our history began.

“Entering the sacred enclosure, a man found a temple surrounded by columns, 40 on each side, and this building had a roof of one stone, carved with panels and richly decorated with excellent paintings.

Monuments about the homeland of each of the kings were kept in it, as well as about temples and the sacrifices that took place in it, and all this was skillfully painted with pictures of the greatest beauty. 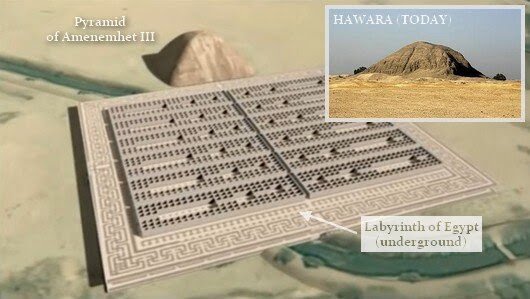 Based on descriptions of ancient texts, such as Herodotus, and other people who visited the magical labyrinth in the distant past, a 17th-century German Jesuit scholar named Athanasius Kircher created the first pictorial reproduction of the mysterious labyrinth in the form in which Herodotus described it.

“It contains twelve courtyards with gates facing each other, six on the north side and six on the south, adjoining one to the other, and the same wall surrounds them all from the outside; and there are two kinds of chambers in it, one kind underground, and the other above them, three thousand in number, fifteen hundred of each kind.

Over all this there is a roof of stone, as well as walls; the walls are covered with figures carved on them; each courtyard is surrounded by pillars of white stone, fitted together in the most perfect way; and at the end of the labyrinth, at the corner of it, there is a pyramid of forty fathoms, on which large figures are carved, and to it there is a path made underground. This is the labyrinth.” 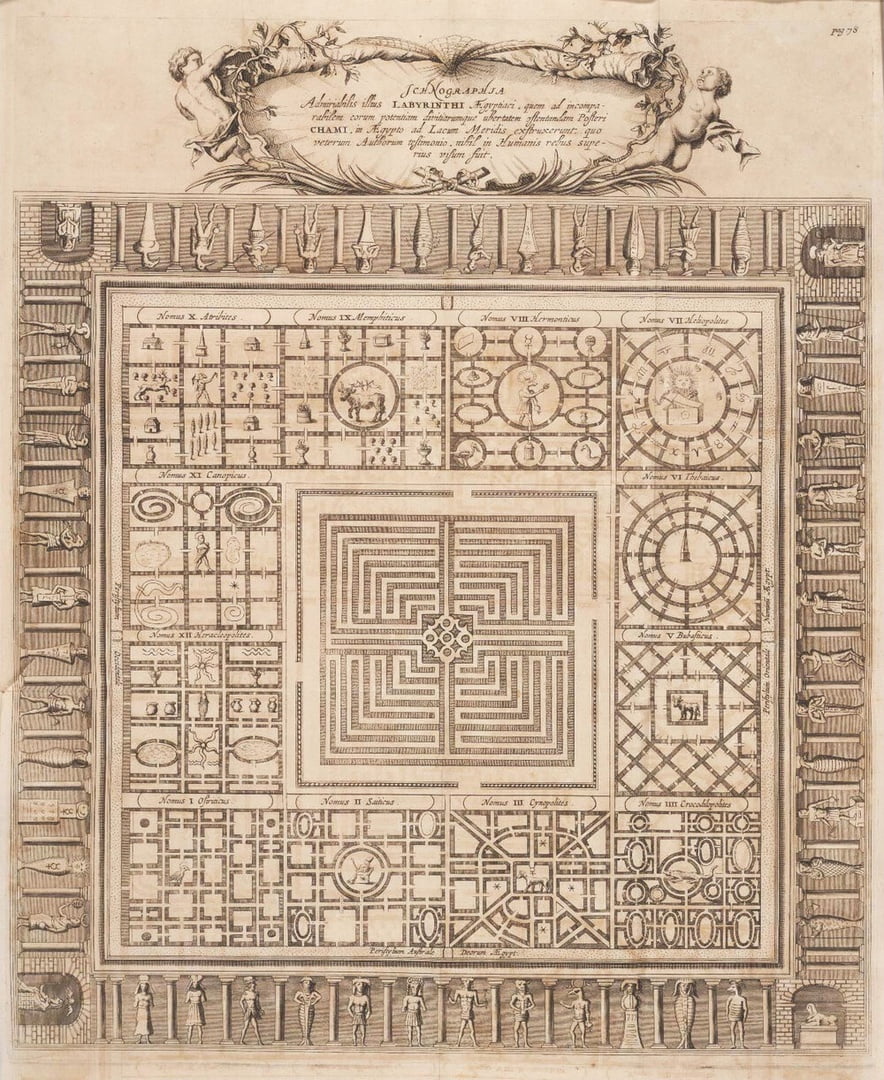 According to these authors, the underground temple consists of more than 3,000 rooms that are filled with incredible hieroglyphs and paintings. The mysterious underground complex is located less than 100 kilometers from Cairo in Hawara.

The Belgian-Egyptian expedition was able to confirm the presence of an underground temple near the pyramid of Amenemhat III. 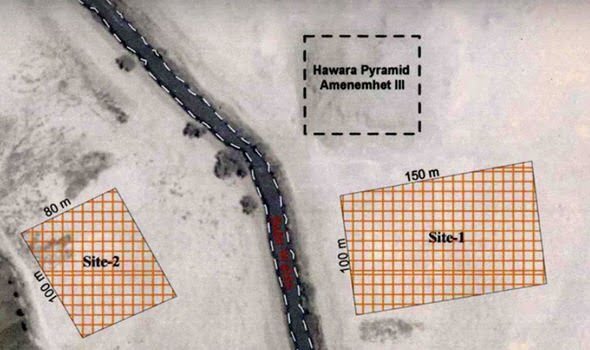 Since there are no visible remains, it was thought to be just a legend passed down from generation to generation until Egyptologist Flinders Petrie discovered its “foundation” in the 1800s, leading experts to the theory that the labyrinth was destroyed during the reign of Ptolemy II and used to build the nearby city of Shedit in honor of his wife Arsinoe.

Without a doubt, Petri’s expedition stumbled upon one of the most incredible discoveries in Egyptian history, and they didn’t even need to excavate to confirm the find.

But in 2008, archaeologists working on an expedition to Mataha made a startling find under the sands, which explorer Ben Van Kerquik recounted on his UnchartedX YouTube channel.

The results of the expedition were published in 2008, shortly after the discovery, in the scientific journal NRIAG, and the results of the research were exchanged at a public lecture at the University of Ghent, which was attended by media from Belgium.

However, information about the find was quickly hushed up as the Secretary General of the Supreme Council of Antiquities (Egypt) placed a ban on all further reporting of the find due to Egyptian national security sanctions. 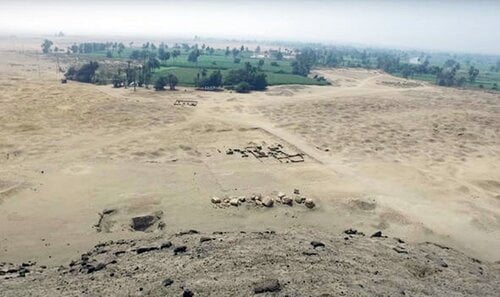 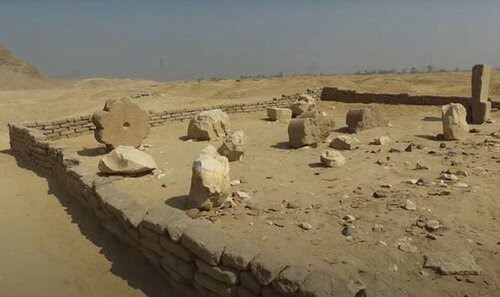 Mr. Van Kerquik went on to describe in detail what the area might have looked like about 2,000 years ago.

He added: “Unknown until 12 years ago, the discovery was hushed up, and today the incredible potential of this place is slowly and irretrievably destroyed due to both the inaction of the authorities and the rising water table in the area.”

Compared to Giza or other famous ancient Egyptian sites, there really isn’t much to take in right away.” Mr. Van Kerquik described in detail how Mr. Petrie first stumbled upon the find.

He added: “Some fragments of the once mighty granite columns carved in the shape of a palm tree or lotus, as well as other small fragments of ancient masonry, remained lying in a small open-air museum.

The first to find real evidence of this was the great Flinders Petrie, who in the late 1800s discovered the remains of a huge stone foundation more than 300 meters wide at a depth of about four meters under sand.

He came to the conclusion that these were the remains of the foundation for the labyrinth, and the structure itself had long been cut down and destroyed. ”

Archaeologists found evidence of a huge structure hiding under the sand in 2008, but Mr Van Kerquik said the area has never been excavated. He continued: “However, new evidence collected in modern times casts doubt on his conclusion, and it now seems likely that what Petrie found was not a foundation, but part of a ceiling or roof.” 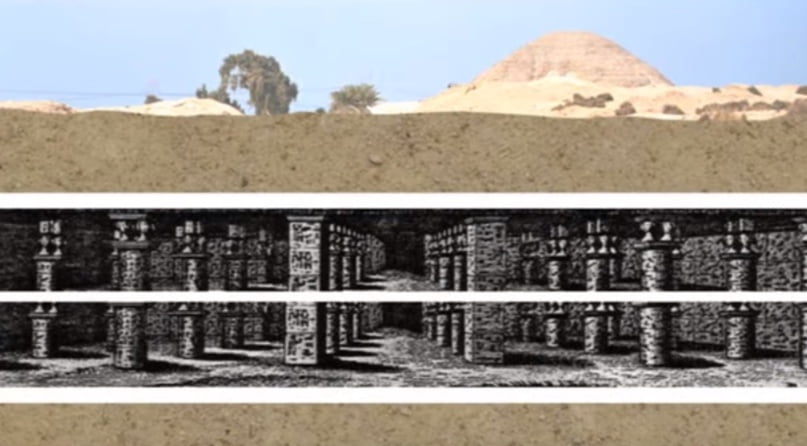 The same areas were scanned in 2008 using ground penetrating radar by the Mataha expedition, a joint work of the Egyptian authorities, the University of Ghent in Belgium and with the financial support of contemporary artist Louis de Cordier.

The results of this expedition clearly indicate the presence of lattice and orderly structures deep under the sand at levels much deeper than Petrie has ever excavated.

Although this expedition was carried out with the full cooperation and permission of the Supreme Council of Antiquities, the official results and conclusion of this legitimate scientific research have never been published.” 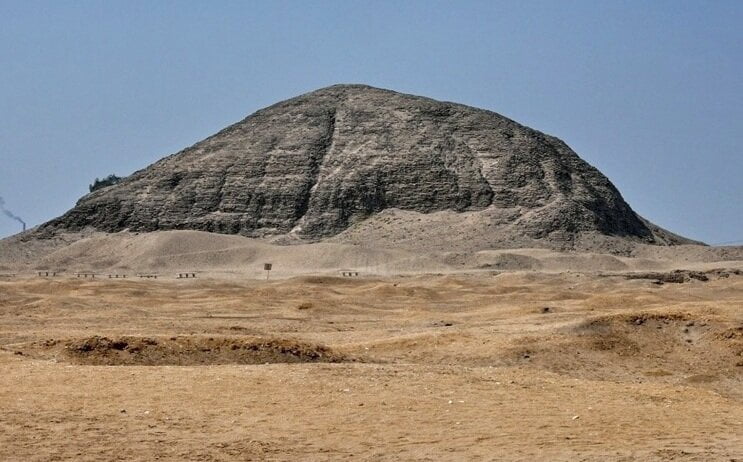 Louis de Cordier, lead researcher of the expedition, patiently waited for two years for the Supreme Council to recognize the finds and make them public, but, unfortunately, this never happened. In 2010, de Cordier launched a website to make the discovery available to the world.

Although researchers have confirmed the existence of an underground complex, future excavations are needed to study the incredible find. It is believed that the treasures of the underground Labyrinth may contain answers to countless historical mysteries and ancient Egyptian civilization.

US super-heavy rocket SLS finally made its first flight

US super-heavy rocket SLS finally made its first flight