(ORDO NEWS) — Greek merchant marine radio operator Polycarp Spentsas had an indescribably strange and unforgettable experience while working aboard the Pothiti SWJC in 1978 off Bermuda.

But he, of course, was not the only person to observe these strange phenomena in the past few decades.

Over the years, this famous area between Bermuda to the north, the Bahamas to the south, and Miami, Florida to the west has been the scene of many strange, inexplicable, and disturbing events, including the disappearance of twelve US Navy crew members on a seaplane patrolling the area during World War II. war, July 10, 1945.

They left Banana River Naval Air Station in Florida the night before for a training flight to Great Exuma in the Bahamas. They were last heard of at 1:16 am the next day at coordinates 25.22N, 7734W, near Providence Island. No trace of the crew or aircraft has ever been found.

At the end of the same year, another military aircraft with 14 pilots on board was lost, and then the aircraft sent to search for this aircraft, on board of which there were thirteen people, was also lost. Up to 155 people have died in this idyllic, turquoise stretch of water east of Miami, according to some estimates.

For a sailor in the merchant marine of Spetsos, the legendary dangers of the area (the Bermuda Triangle) suddenly became personal in 1978, when, during the performance of his usual duties, he watched the development of the following strange events.

As he recalls: “We started from Porto Matanzas, Cuba, bound for Algiers, at an average speed of 11 miles. high speed – but the instruments showed a constant speed of 10-11 nautical miles per hour.

“Some of my colleagues at first suggested that I may have made a mistake in timing, because I was a radio operator. But this did not happen, and the ship continued to cut through the waves like a dolphin.”

“At 12 o’clock in the afternoon,” Spentsas continued, “the captain asked the second officer to put a Pakistani sailor at the helm, as he himself was not feeling well. He could not raise his arms, and his body seemed too heavy all over.”

Soon an electrician arrived on the bridge, having risen from the engine room, upset that he noticed that all the clocks on the ship had passed by a full two hours ahead. 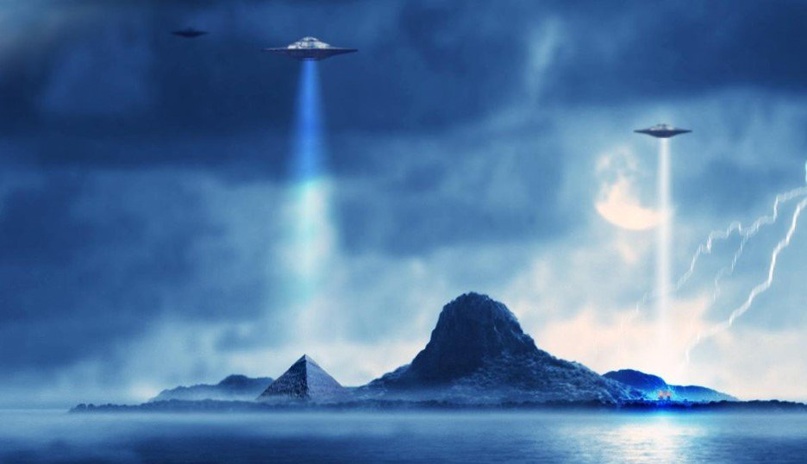 The experienced navigator continues: “But the strangest of all this was what happened a little after five in the evening.

The cook and I were playing backgammon in the smoking room, when we suddenly looked back and saw to the left of the ship, that is, from the northwest side a few miles away, in the sky, a large white unidentified flying object.

Then two smaller flying objects appeared to the west of the large one, and indeed, one of them was attached to it.’American experiments’, I guessed.

“I immediately left and went to the bridge to ask, full of anguish, if anyone else had seen these strange devices. No one noticed. However, I was sure that something strange was happening over time and we were affected by the acceleration of the UFO movement “.

Spentsas explains: “I looked at my watch, time was ticking. I switched the radio to 500 kHz to fill the calendar and heard Morse code – but it was unnaturally fast. the response time signals are too fast – so fast that I thought it was the station’s fault, writes Almanac of the Unknown.

Greek crew and strange and inexplicable events in the Bermuda Triangle

“I jumped up from my chair, opened the window in the wheelhouse and looked at the captain. I could use the Morse system, but noticed that my hands could not even handle five letters a minute – and it took about two minutes.

“Frustrated, I told the captain: ‘My hands just don’t work, they don’t obey me!’ He replied that no one should touch the ship’s autopilot.”

Spentsas relates that “the next day the crew discussed the strange events that had happened to everyone.

“One sailor complained that as soon as he lit a cigarette, he did not have enough time to smoke, because it immediately burned out.

The second officer, who served on the shift from midnight to four in the morning, went to his cabin and brushed his teeth before He suddenly yelled that the time had just changed to 11:40 pm, so he didn’t have time to sleep.

“All of us at this time felt bradycardia, an abnormally slow heartbeat, as well as hypothermia.”

“For many years,” Spentsas explained to interviewers, “I have been trying to explain these curious phenomena. I believe that the bradycardia and reduced reflexes of the crew are caused by the so-called “gravitational time dilation.”

Gravitational waves (varions) emitted when the UFO accelerates for takeoff and other movements, cause biochemical changes in the metabolism of the human body. This process occurs in accordance with the theories of Niels Bohr and Albert Einstein,” Spentsas concluded.

Whatever really happened, more than one person experienced it on that strange day in the Atlantic. Time will tell if any more evidence of strange occurrences in this region of the ocean will be found.

Cherokee tribe and creatures from other worlds

Cherokee tribe and creatures from other worlds