(ORDO NEWS) — There is a huge void inside the Great Pyramid of Giza.

The chamber, sealed some 4,500 years ago, has an unknown purpose, although some have speculated that it may be the secret burial chamber of Pharaoh Khufu, who ordered the construction of the pyramid.

Muonic particles are negatively charged particles produced by cosmic rays that collide with atoms in the Earth‘s upper atmosphere at a speed of about 10,000 per square meter per minute.

“Like X-rays, these elementary particles can maintain a quasi-linear trajectory as they travel through hundreds of meters of rock,” explains the team of researchers.

“By registering the position and direction of each muon that crosses its detection surface, the muon detector can distinguish cavities from rock.”

All this suggests that they used a very advanced way to look inside the Great Pyramid. And inside they found a chamber that they had previously known nothing about.

“We are reporting the discovery of a large void (with a similar cross section to that of the Grand Gallery and a minimum length of 30 meters) located above the Grand Gallery,” the team said.

“This is the first major internal structure discovered in the Great Pyramid since the nineteenth century.”

They called it the “big void”, which was confirmed using three different muon detection methods. However, it is not clear what this camera was intended for. 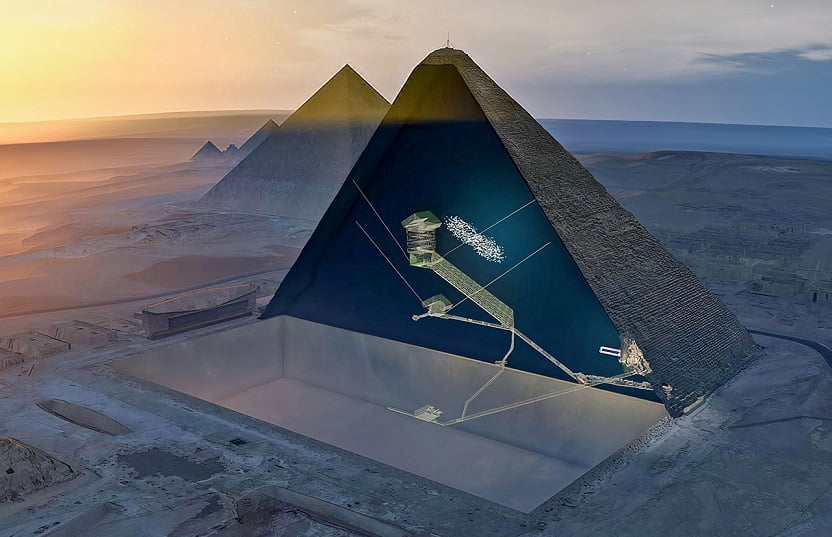 University of Cambridge archaeologist Kate Spence told National Geographic that the void could be the result of how the pyramid was built.

An interior ramp was used to move the roof blocks into place, which was then abandoned or filled with rubble. Another theory regarding the purpose of the room is that it was Khufu’s secret burial chamber.

When the pyramids were first discovered and explored, 19th-century archaeologists discovered several chambers, including one containing a sarcophagus that was thought to contain Khufu himself.

However, when the sarcophagus was opened, it was empty.

The remains have long been considered and continue to be considered stolen. However, the theory that there was a secret fourth chamber containing the mummy of Pharaoh Khufu predated the opening of the fourth chamber.

In 2004, two French amateur Egyptologists, who used ground penetrating radar and architectural analysis to back up their claims, theorized that there was an additional camera.

The researchers argued that the pyramid was not carefully planned in advance, as most believed, but changed as it was built.

One of the researchers, the architect Gilles Dormione, suggested that the pyramid was adjusted as the builders realized that some of the chambers would not support the weight of the burial sarcophagus.

The royal chamber contains giant granite beams with large cracks that have been attributed to earthquakes since the pyramid was built.

However, he believes that the cracks occurred during the construction of the pyramids, as evidenced by traces of ancient plaster found inside them.

“The whole problem of building the Great Pyramid can be summed up by this theory: Khufu built three burial chambers for himself.

The first was left unfinished, the second was available, and the third cracked.

Therefore, Khufu was buried in the second one,” Dormion said about this theory back in 2004.

In 2022, a team of researchers announced their plans to map the pyramid using more sophisticated equipment.

“We plan to install an instrument with 100 times the sensitivity of the equipment recently used in the Great Pyramid, which will image muons from almost all angles and for the first time will provide a true tomographic image of such a large structure,” the researchers said.

At the moment, everything rests on the financing of their venture, after which it will take them about two years to create special detectors.

Discoveries made by chance

Discoveries made by chance