(ORDO NEWS) — During excavations in Cairo on the territory of the ancient city of Heliopolis, archaeologists discovered granite blocks on which the name of Pharaoh Khufu was carved. Scientists have also unearthed the foundation of the courtyard of the solar temple, built during the New Kingdom, and numerous fragments of sculptures and altar structures. The Egyptian Ministry of Tourism and Antiquities writes about the finds on its Facebook page.

One of the oldest cities in the Nile Valley, Iunu (“The Stronghold”), which the Greeks called Heliopolis, is now almost completely buried under the dense urban development of the northeastern Cairo regions of El Mataria and Ain Shams.

Only a small section of Heliopolis is available for archaeological research around the obelisk of the 20th century BC – the remains of the sanctuary built by the pharaoh of the XII dynasty Senusret I.

Heliopolis arose long before the birth of the state of the pharaohs and even in predynastic times was the center of the cult of the solar deity.

In the era of the Old Kingdom, the city gradually rose and the influence of the Heliopolis priesthood grew, since the solar cult became an important component of the concept of royal power.

Archaeological data show that the pharaohs of the Old Kingdom carried out construction activities in Heliopolis, but only a few remnants have survived from the buildings of that time to the present day.

The most famous of them are the bas-reliefs of the king of the III dynasty Necherikhet-Djoser (XXVII century BC), a fragment of the Teti obelisk (XXIV century BC, VI dynasty) and an inscription of the XXIII century BC, which tells about the installation of two obelisks by Pharaoh Pepi II in the holy city. A priestly necropolis has also been preserved from the Old Kingdom,

The solar temple, which appeared under Senusret I in the era of the Middle Kingdom, may have been erected on the site of more ancient buildings, on a natural elevation or an artificially erected platform. The obelisks, one of which has been preserved, stood in the center of the temple space.

Judging by the results of geophysical studies, it was very extensive: more than 500 meters wide and almost a kilometer long. It was protected by a powerful (up to 10 meters thick) wall made of raw brick, part of which was excavated by archaeologists.

The most numerous monuments of Heliopolis date back to the New Kingdom and the Late Period. These are fragments of statues and traces of buildings that appeared here under Thutmose III, Akhenaten, Psammetikh I and other kings. 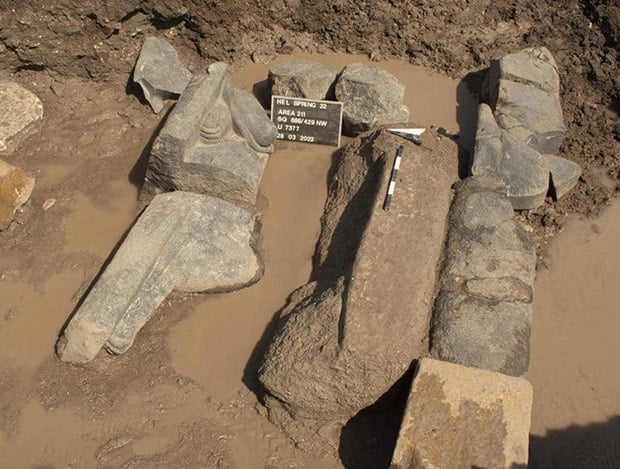 The 2022 season has brought Egyptian and German scientists working together on the long-term Heliopolis project a host of finds dating from Protodynastic to the Late Period.

Archaeologists led by Ayman Ashmawy of the Higher Council of Antiquities and Dietrich Raue of the University of Leipzig discovered ceramics, remains of temple structures and statues. Research was carried out in the western part of the archaeological zone of Heliopolis.

The oldest excavated layers date from the Naqada IIIb period, around the 31st century BC. The rulers of this era, during which the formation of a single state took place, Egyptologists refer to the conditional zero dynasty.

Ceramic shards were found in these layers – additional evidence that Heliopolis was inhabited at such a distant time. Above, layers of the first half of the 3rd millennium BC, also containing ceramics, were excavated. The latest of them date back to the epoch of the IV dynasty – the heyday of the Old Kingdom. One of the main finds belongs to the IV dynasty – fragments of granite blocks with the name of Pharaoh Khufu, or Cheops, the builder of the Great Pyramid at Giza, who ruled around 2589-2566 BC. This is the first find associated with the name of Khufu, in Heliopolis.

True, scientists do not exclude the possibility that the blocks could come from a structure that stood elsewhere. In accordance with the practice common in subsequent times (especially under the Ramessides at the end of the 2nd millennium BC), the rulers of later eras could dismantle it and use it for their own purposes.

Another find that dates back to the Old Kingdom is a granite fragment depicting the god Horus from the time of King Pepi I of the VI dynasty (about 2280 BC). 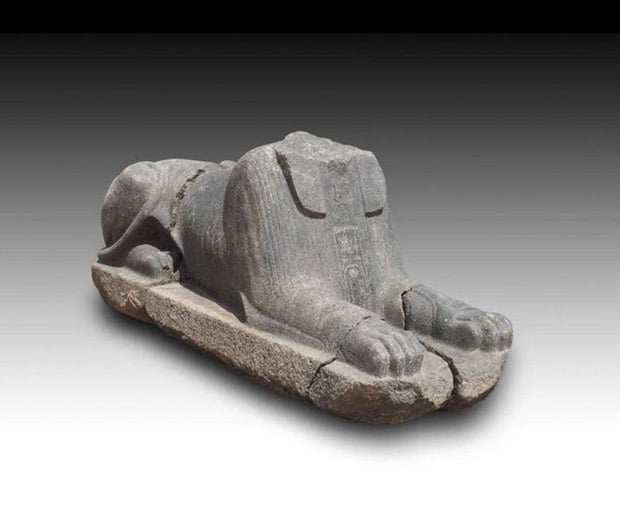 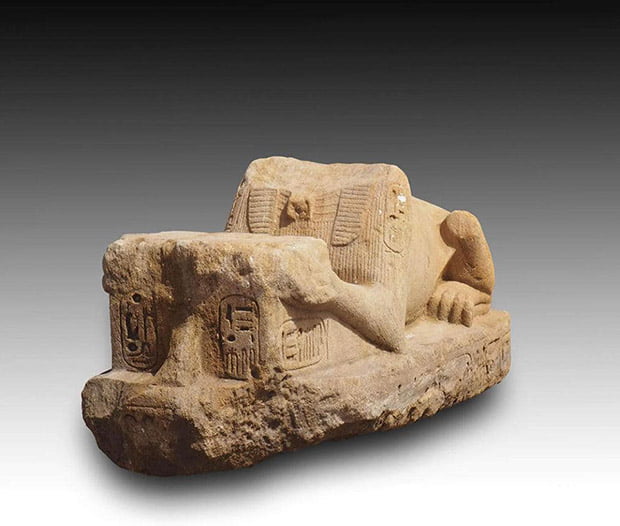 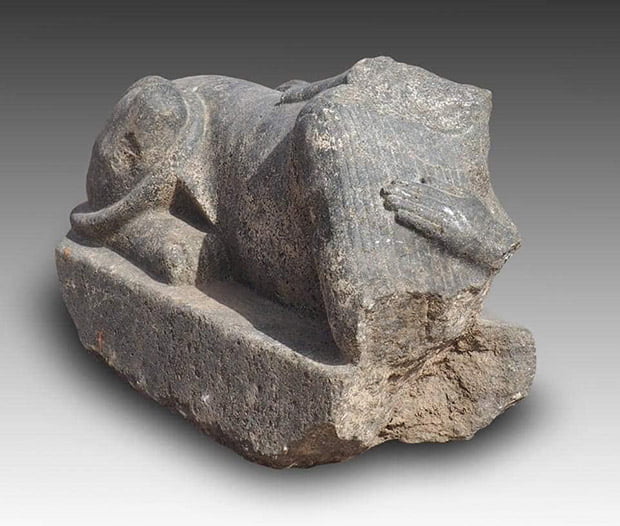 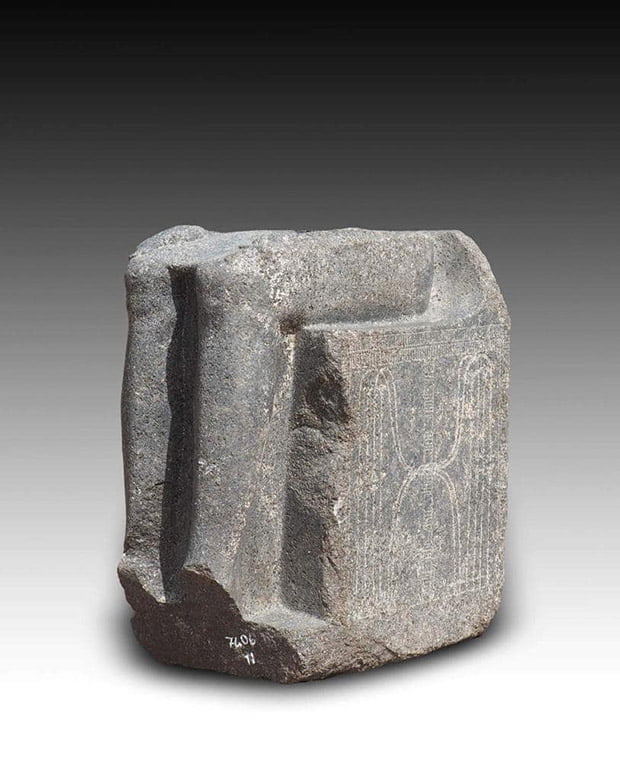 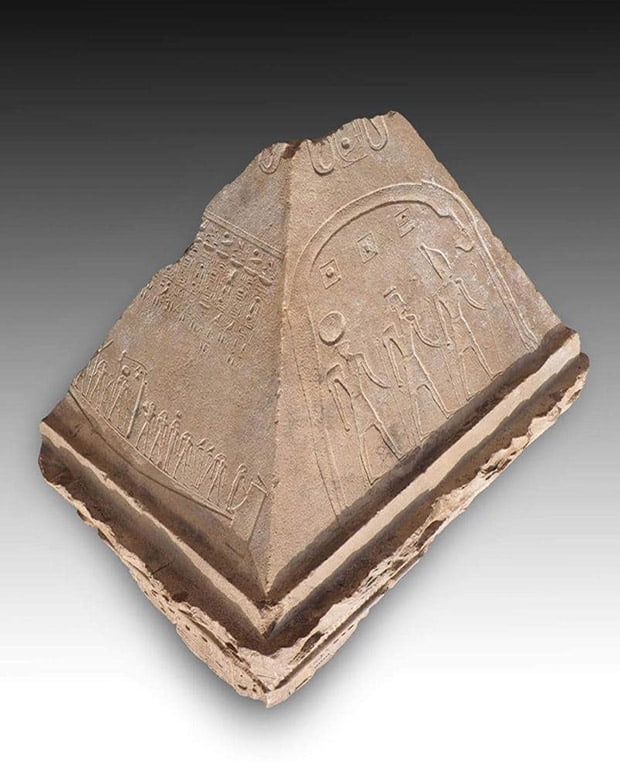 Archaeologists have discovered fragments of steles, naos and altars, also dating from different times: from the decline of the Middle Kingdom (end of the 18th century BC) to the founder of the XXVI (Sais) dynasty, Psammetikos I, who ruled in 664-610 BC.

The finds also included bases for statues. One of them is carved with the name of Pharaoh Amasis, or Ahmose II (570-526 BC), the other pedestal, made of pink granite, was intended for a colossal statue of a sacred baboon. 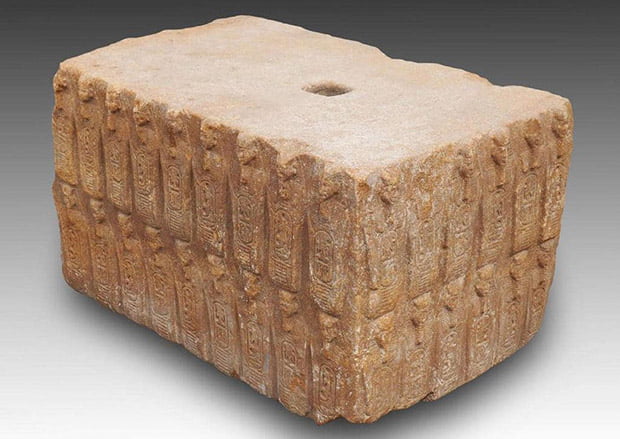 Finally, in addition to individual statues, blocks and other elements of temple buildings, the researchers unearthed part of the foundation of the courtyard.

It was built for a solar sanctuary during the New Kingdom era. The head of the mission from the Egyptian side, Ayman Ashmawi, noted that excavations for the 2022 season are ongoing, and there is every reason to expect further finds from them.