(ORDO NEWS) — Tombs were discovered in Cyprus in 2018. Some time ago, archaeologists re-conducted their research and were able to find more than 500 artifacts of gold and silver, precious stones and bronze. All products were made during the reign of the Queen of Egypt Nefertiti, as well as her husband Akhenaten.

Employees of the University of Gothenburg found jewelry made of gold, numerous amulets shaped like scarabs. An interesting find that attracted attention was the necklace in the shape of a lotus flower. Pure gold and a variety of precious stones were used for it. It was possible to determine the date of manufacture of the artifacts only by comparing with similar items that were previously found in Egypt.

In addition to jewelry, experts found remains that belong to 155 deceased Egyptians. The tombs were in use from about 1500 to 1350 BC. They contained a large number of various items of a funerary nature. One of the skeletons belonged to a five-year-old boy who was born into a very wealthy family. He was buried along with numerous jewelry, which included a crown of gold and a beautiful necklace made of quality beads.

Archaeologists in the tombs have discovered a cuneiform seal that was used in Mesopotamia. The inscription was completely deciphered.

For the first time, research in this region began in 2010, but two huge tombs were excavated only a couple of years ago. Scientists faced difficulties, because bones became incredibly fragile due to a long stay in salty soil.

Earlier we wrote that archaeologists have found out to whom the ancient traces in Africa belong.

And also recall that in Peru they found an ancient mummy tied with ropes. 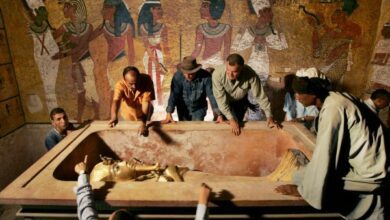