(ORDO NEWS) — Scientists using an innovative mobile laser method have determined that the gold found in ancient Troy, Poliochne and Ur is of the same origin.

Troy , or Ilion, is an ancient fortified city in Asia Minor on the Troad peninsula off the coast of the Aegean Sea, on the shore of the lagoon at the entrance to the Dardanelles.

The Trojan War is sung in the poem “Iliad”, the author of which is considered Homer. The events described by Homer, in the current view of historians, belong to the Cretan-Mycenaean era.

Poliochni is a city of the Helladic civilization that existed in the Bronze Age on an oblong hill on the east coast of the Greek island of Lemnos, in the village of Kaminia, near Cape Voroskopos. Discovered as a result of excavations by Italian archaeologists.

Ur is one of the oldest Sumerian city-states of the ancient southern Mesopotamia, existed from the 6th millennium BC. e. until the 4th century BC. e. Ur was located in southern Babylonia, in the south of modern Tell el-Muqayyar in Iraq, near Nasiriya, in the lower reaches on the western bank of the Euphrates River in the territory that has the modern Arabic name “Tel el-Muqayyar” (“Bitumen Hill”). The city is mentioned in the Old Testament as “Ur of the Chaldees”, the birthplace of Abraham. 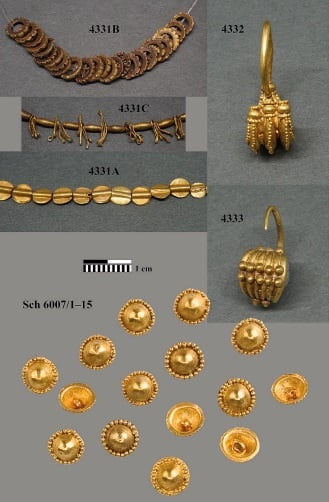 Researchers from several institutes, led by Ernst Pernick, Scientific Director of the Center for Archaeometry Kurt-Engelhorn (CEZA) at the Reuss-Engelhorn Museums in Mannheim and Director of the Troy Project at the University of Tübingen, used a portable laser ablation (pLA) system to analyze samples of Bronze Age jewelry, found at Troy and Poliochni.

Troy (also called Ilios or Ilion and Ilium) at present-day Hisarlık in Khanakkale, Turkey, is a multi-period site, now partly buried in an artificial rampart, illustrating the gradual development of a city in northwestern Asia Minor.

Troy became the famous setting for Homer’s Iliad (one of the oldest works of Western literature that has come down to us), which tells the story of the siege of the city by a coalition of Greek states.

Poliochne, often referred to by its modern name Poliochni, was an ancient settlement on the east coast of the island of Lemnos. It was inhabited in the Late Chalcolithic and the earliest Aegean Bronze Age, and is believed to be one of the oldest cities in Europe, predating the construction of Troy.

Ever since Heinrich Schliemann discovered Priam’s treasure in Troy in 1873, the origin of the gold has been a mystery.

Now Professor Pernicka and an international team have been able to prove that the treasures come from secondary deposits such as rivers, and their chemical composition is identical not only to the gold objects from the Poliochni settlement on Lemnos and from the royal tombs at Ur in Mesopotamia, but also to objects from the South Caucasus\ Georgia. 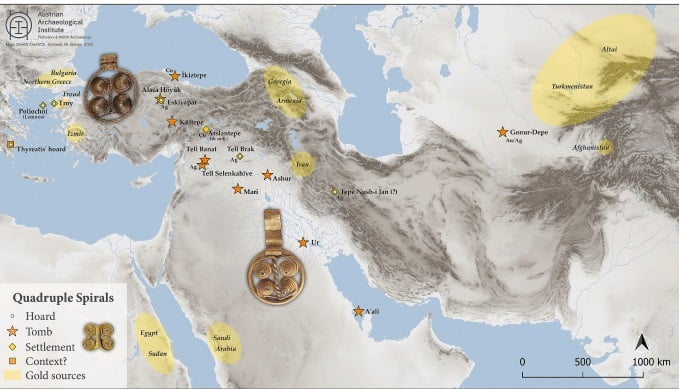 ” This means that there were trade links between these widely separated regions ,” says Pernicka.

The study, published in the Journal of Archaeological Science, used a portable laser ablation (pLA) system that allowed researchers to perform minimally invasive sample retrieval. The laser melts a small, microscopic hole in the samples, which are then analyzed for composition using mass spectrometry.

In total, the researchers studied 61 artifacts using this method, all from the early Bronze Age between 2500 and 2000 BC.

Depending on the alloy, scientists can draw up a clear chemical profile of the finds and use it to draw conclusions. For example, the high concentrations of zinc, palladium and platinum in jewelry from Troy is a clear indication that the gold was washed out of the river in the form of gold dust.

The researchers were also able to show that the jewelry was mass-produced in workshops rather than piece by piece. This is the only reasonable explanation for, for example, the same content of platinum and palladium in gold discs in necklaces of the same design found in different places.

Experts have long argued about the origin of gold from the royal tombs of Ur. There are no natural sources of gold in Mesopotamia – so Western Anatolia, where Troy was also located, was considered a possible source.

“However, other completely different regions were also considered, which, as is known, had close trade ties with Ur,” says Pernika.

Comparative archaeological studies have shown a striking similarity between objects used in the early Bronze Age over a large geographical area stretching from the Aegean to the Indus Valley in present-day Pakistan: official seals and standardized scales, earrings with identical spiral patterns, gems such as lapis lazuli or shimmering carnelian.

“The new archaeometric data provide a robust and global basis for our models of societies, their networks and the meaning of resources around 4,500 years ago,” says Horace.

In conclusion, it should be noted that the exact origin of the gold of Troy could not be established, but Pernicka says: “If we trace the proportion of trace elements in gold from Troy, Poliochne and Ur, then Bronze Age gold from Georgia most closely correlates with the indicated finds.

But we still there is not enough data and research from other regions and other sites to support this assumption.”