(ORDO NEWS) — The European Space Agency is preparing to launch a new probe into the Jupiter system. The main task of the apparatus is to test Ganymede, the largest satellite in the entire solar system, for suitability for life.

According to the nomenclature of the European Space Agency (ESA), the JUICE mission belongs to class L – the largest projects that are being implemented as part of the Cosmic Vision fundamental research program. JUICE has a budget of around 1 billion euros and is being worked on with the appropriate care and deliberation.

“The idea of ​​a space mission goes through several stages ,” ESA researcher Dmitry Titov told us. – The first of them is something like preliminary design, when scientific tasks are selected, technical capabilities are evaluated, and a rough outline of the apparatus and strategy is created.

I led a team of scientists that worked with the JUICE mission at this stage until 2015, when the project was accepted for execution. The bowels of Ganymede are clearly structured: a liquid iron core is surrounded by a rocky mantle, followed by a layer of ice and a liquid salty ocean, which is covered by an ice crust. It is assumed that the ocean lies at a depth of about 900 km

The retinue of the giant

Huge and massive – almost 320 times heavier than Earth – Jupiter is surrounded by dozens of moons. Astronomers now and then discover new small moons near the planet, but the most notable of them – Io, Europa, Ganymede and Callisto – were discovered by Galileo.

Each is a whole unusual world. Io is the most volcanically active body in the solar system, with more than 400 volcanoes found on its surface, about 150 of which are active. Slightly further away from Jupiter orbit Europa and Ganymede, a moon larger than Mercury, with entire oceans of liquid water hidden under their crust.

“Well, Callisto is generally wonderful ,” Dmitry adds. “ Its internal matter is almost undifferentiated: there is no dense core, and all the interiors are more or less evenly mixed, which is not at all typical for celestial bodies of this size.”

But it is not for nothing that astronomers call the vicinity of Jupiter the “Solar System in Miniature”: not only individual unusual objects are of interest, but also the system as a whole, with all the complex interactions between its bodies.

Here you can observe the gravitational and tidal forces that arise between the giant planet and its moons. Jupiter’s extremely powerful magnetic field scatters clouds and plasma streams around. Matter that comes off the surface of Io and some other satellites also gets here.

These diverse interactions can tell a lot about the structure of the interior of celestial bodies, and about the subtle processes that take place in the magnetic fields that envelop them. Just a unique natural laboratory, a paradise for scientists.

“First of all, it was necessary to decide what to choose as the main goal of the JUICE mission – Jupiter itself or satellites,” says Dmitry Titov. – It would seem that a giant planet that dominates all of its surroundings should be the most interesting.

However, previous missions operating in the Jupiter system have found that some moons appear to have a liquid ocean beneath the solid surface. These findings have turned the entire paradigm of the search for life in the universe and defined the main scientific objectives of our project.”

Life on the satellite

Until recently, it seemed obvious that if there is life somewhere nearby, then, of course, on Mars. This planet is similar to Earth today, but in the past it was much warmer and more humid.

“This approach can be called “earth-centric”: it is understood that an ocean is needed on the surface of the planet in order for life to arise in its warm lagoons ,” continues Dmitry. “

But when it became known about liquid water under the surface of Ganymede and Europa, the moons of Jupiter, scientists realized that there could also be all the key ingredients there: water saturated with mineral salts and organic matter, sufficient heat and energy, long-term stable conditions.”.

Not surprisingly, the creators of the JUICE mission opted for satellites rather than Jupiter itself. And since at the same time, American scientists from NASA began planning a flight to Europe, then Ganymede got to earthly Europe.

According to Dmitry Titov, ESA was even happy about this. The fact is that Europe is considered an extremely difficult target for space probes. The orbit of this satellite lies in the radiation belts of Jupiter – areas of its magnetic field, where huge amounts of high-energy particles accumulate.

“The radiation there is absolutely insane, so the exploration of Europe is associated with enormous difficulties in terms of radiation protection, ” Dmitry explains. -Technologically and financially, neither the EU nor the US is yet able to create a probe that can work for a long time in such conditions.

The Americans even abandoned the orbiter, replacing it with numerous fast satellite flybys. Their probe will move along a highly elongated trajectory, approaching Europe only in small areas, quickly take measurements and move away to a safe distance.

In addition, Ganymede, unlike Europa, has its own magnetic field. It actively interacts with Jupiter’s mighty magnetosphere, generating not only bright auroras, but also many other phenomena that are difficult to find anywhere else in the solar system.

And of course, this satellite has its own subsurface ocean. But if water geysers break through from under the ice crust of Europa in some places, then the Ganymede ocean is completely locked under a thicker layer of ice. To look there, to the depth, you will have to use a lot of sophisticated instruments. On Jupiter and in its vicinity, you can find a wide variety of celestial bodies and types of interactions between them. The planet’s magnetic field is several orders of magnitude stronger than Earth’s and sets the tone for this system, generating complex turbulent plasma flows and bright auroras

“This is how work is being done on similar space projects ,” explains Dmitry Titov. “ First, the fundamental questions that the mission must answer are formulated. Further, they are broken down into smaller tasks that can be solved using specific measurements made by instruments on board.

Then everything comes together”. And since JUICE is an L-class mission, “billionth”, there are an abundance of devices installed on the device.

A diverse set of instruments for more than a dozen scientific experiments includes cameras, a magnetometer, spectrometers – one to study the composition of the surface of Ganymede, the second to study its rarefied atmosphere, and the third to observe the auroras and the movement of charged particles in a magnetic field.

A laser altimeter (altimeter) will allow cartography of the satellite, and a subsurface radar will measure its crust to a depth of several kilometers – this will help to explore its structure and, perhaps, even see the hidden ocean.

A whole block of equipment is designed to detect plasma particles in a wide energy range. A separate gravitational experiment is also planned, where the JUICE apparatus itself will act as a sensor. By receiving its radio signals on Earth, scientists will be able to track the speed of the probe with great accuracy – up to fractions of a millimeter per second.

Flying over surface areas with different densities and masses, the device will slightly accelerate or slow down. By evaluating these changes in speed, it will be possible to compile a complete picture of the gravitational field of Ganymede, to determine the thickness and properties of the satellite’s crust, and the depth of its ocean.

“The main thing that everyone is interested in is the possibility of the emergence of life in ice worlds ,” Dmitry adds. – But so far we are not looking directly for organisms and traces of their activity. First, we need to more accurately determine the physical conditions on Ganymede: the size of its under-ice ocean, composition, temperature, etc.”

Dmitry Titov, employee of the Institute for Solar System Research of the Max Planck Society and ESA, scientific director of the first phase of the JUICE project:

“The project is going exactly according to plan, and everything indicates that JUICE will be launched on time. By and large, there is not much choice, since it is better to start to Jupiter within a certain window, when the planets line up in a way suitable for maneuvers.

This doesn’t happen too often – if you miss a good opportunity, you’ll have to use a completely different trajectory and take much longer to fly. So we need to send a probe already in 2023.” For testing, the radar was raised by helicopter with a fully deployed 16-meter antenna

“From a human point of view, the project is very impressive… It is already a complex machine the size of a bus: the apparatus itself weighs almost two tons, and when fully charged with fuel, it will gain nearly five.”

“From a human point of view, the project is very impressive. I remember its very beginning – the mission in the form of reports, calculations, articles, – Dmitry shares. “

But now seven years have passed, and we already have a complex car the size of a bus: the device itself weighs almost two tons, and when fully charged with fuel, it will pick up almost five.”

Fuel will be needed for maneuvers during the flight: starting in April 2023, the probe will move through the inner regions of the solar system for a couple of years, changing course near the Earth, Moon and Venus, the gravity of which will push JUICE towards the target.

But the device will be able to receive power for the operation of its tools from solar panels. At this distance from the Sun, the radiation is already quite weak, so the area of ​​the probe panels reaches almost 100 square meters. m.

JUICE will arrive in the Jupiter system in 2031 and, as planned, will work there for about a year and a half, considering Ganymede and its subglacial ocean.

Of course, it would be much more interesting to go down to the surface and try to drill a well, but so far such projects are too complicated and expensive even for the largest space agencies in the world.

Before risking such an apparatus, everything must be carefully examined from orbit, as was done on the Moon and Mars. But if orbital probes confirm that the subglacial oceans of Europa and Ganymede may be habitable, there will be plenty of motives for landing missions.

1. Detection of hidden reservoirs of water and description of the structure of the under-ice ocean.

2. Topographic, geological and mineralogical mapping of the surface.

3. Determination of the properties of the ice crust.

4. Study of the internal distribution of mass, dynamics and evolution of the bowels.

6. Observation of magnetic fields and their interactions with Jupiter’s magnetosphere.

NASA to search for life on Jupiter’s moon

NASA to search for life on Jupiter’s moon 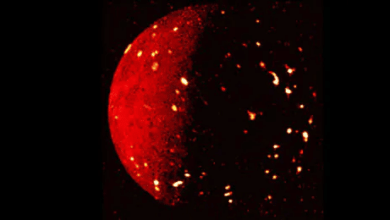 Are these roads? Close-up photograph of Jupiter’s moon unveiled