American scientists have obtained a line of genetically modified E. coli bacteria that are able to live directly in the human intestine and produce levodopa, an effective remedy for parkinsonism, which patients need continuously.

They spoke about this on April 3 in a report made for the annual meeting of the American Society for Pharmacology and Experimental Therapeutics.

Parkinsonism is a slowly progressive neurodegenerative disease that occurs in the elderly. It is manifested by severe coordination disorders, involuntary movements and tremor, which prevents even the simplest actions, sometimes including swallowing.

The cause of Parkinson’s disease is the massive death of neurons that produce dopamine, an important neurotransmitter that, in particular, regulates motor activity.

It is not yet possible to “resurrect” these cells, and this condition remains incurable. One of the few effective remedies for parkinsonism is levodopa , a dopamine precursor substance that exhibits a similar effect to it.

Patients need it constantly to replace the lack of a “natural” neurotransmitter, and with any interruption in taking the symptoms quickly return. 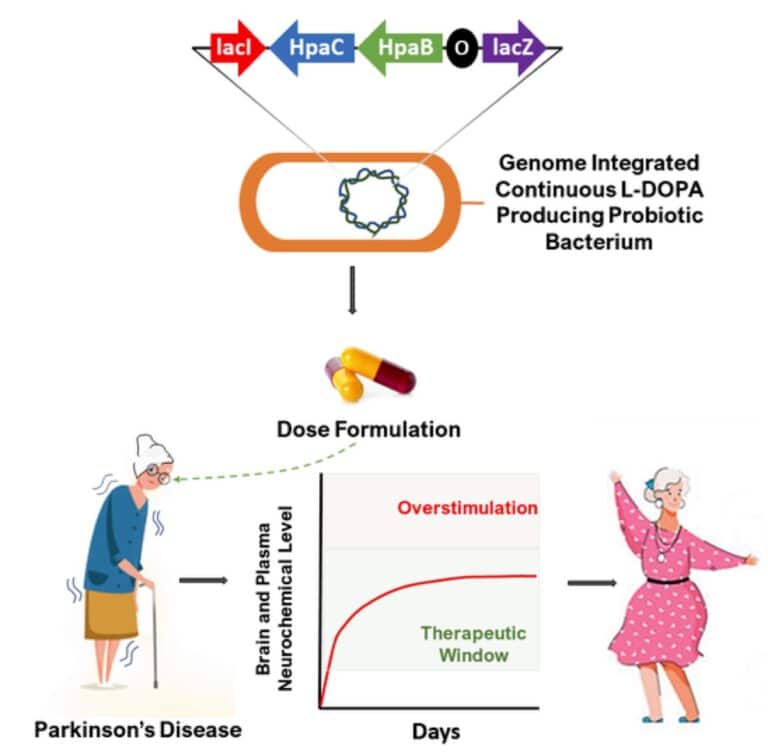 Bacteria obtained by the team of Professor Anumantha Kanthasamy from the University of Georgia (USA) can solve this problem. The new line of E. coli Nissle 1917 (EcN) E. coli can supply the body with levodopa continuously.

Efficiency has been confirmed in experiments with laboratory mice serving as a model of parkinsonism. The microbes provided them with a stable supply of the drug, which was reflected in the improvement of the motor and cognitive functions of the animals.

It is required to receive a bacterial preparation daily, and by adjusting its amount, it is possible to control the level of levodopa that enters the body.

In addition, the activity of the gene responsible for the synthesis of drugs in GM microbes depends on a rare sugar – rhamnose . Therefore, the dosage of levodopa can be changed by supplying the bacteria with less or more rhamnose.

Such a bacterial system could also be an effective drug delivery vehicle for other diseases that require constant medication, including depression and Alzheimer’s, the scientists say.