(ORDO NEWS) — European ecologists have found that a further increase in autumn temperatures will potentially lead to a sharp decline in the number of butterflies as a result of accelerating their metabolism and disrupting the life cycle of insects. This was announced on Friday by the press service of the British Ecological Society.

“Rising temperatures cause the pupae of hibernating butterflies to expend more energy than they do in normal weather. Our colleagues have shown in the past that warm winters have an extremely negative effect on the survival of these insects.

Our observations have shown that that warm autumns are even more dangerous for butterflies,” said Matthew Nielsen, a researcher at Stockholm University (Sweden), quoted by the press service of the university.

In recent years, environmentalists have recorded a sharp decline in the populations of many European butterflies.

According to their forecasts, the number of cabbages, turnips and rutabids can be reduced to zero in the UK and some other regions of Europe by 2050. The reason for the disappearance of insects is both human activity and changes in the functioning of ecosystems associated with global warming.

Nielsen and his colleagues found that the disappearance of butterflies in many regions of Europe may be due to the fact that autumn temperatures have risen markedly in recent decades and continue to rise.

Scientists came to this conclusion in the course of experiments with pupae of brukvennitsa, whose numbers have declined sharply in Britain in recent years.

Reasons for the extinction of butterflies

During these experiments, ecologists studied in detail how elevated environmental temperatures affect the likelihood of survival of hibernating pupae of these butterflies.

To do this, the scientists placed the insects in special containers in which the “autumn” temperature was maintained: 15, 20 or 25 degrees Celsius, after which they were transferred to an analog of winter soil cooled to 2 degrees Celsius.

Subsequent observations unexpectedly showed that a warm autumn had a negative effect on the survival of rutabaga pupae.

In particular, scientists found that more than half of the pupae that lived in chambers with a temperature of 25 degrees Celsius did not survive the winter, and almost all of the surviving butterflies were unable to continue their kind.

Similarly, an autumn temperature of 20 degrees Celsius reduced the number of healthy butterflies that left the pupae during the spring by 40%.

The reason for this, as subsequent observations showed, was that elevated ambient temperatures accelerated the metabolism of rutabaga, as a result of which the nutrient reserves in the pupae were reduced by 10-20% compared to the norm.

This extremely negatively affected both the survival of butterflies and their further development after emerging from the chrysalis.

In the future, as climatologists suggest, autumn temperatures in Europe and other regions of the temperate climate zone of the Earth will only increase, which threatens the survival of most species of butterflies.

Subsequent experiments and observations of insects in nature will show how high this danger is, summed up Nielsen and his colleagues. 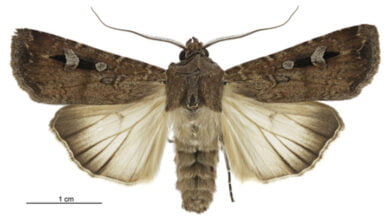