Ecologists have found that African spotted hyenas have fully adapted to the change in migration routes of zebras and wildebeests, which was provoked by global warming. This was announced on Monday by the press service of the German Institute for the Study of Zoos and Wildlife (IZW).

“We assessed the ability of hyenas to adapt to new environmental conditions by how successfully female hyenas fed their young with milk.

Our observations indicate that these predators adapt well to changing climatic conditions and changes in prey migration patterns in their habitat “, – said IZW researcher Morgana Zhikel, her words are quoted by the press service of the institute.

Global warming, as the researchers note, has significantly changed the nature of precipitation in the Tanzanian Serengeti National Park and other regions of East Africa.

This led to changes in the onset of dry and wet seasons in the central and southern regions of the continent, which, in turn, affected the timing of the seasonal migrations of wildebeest and zebra, the main prey of hyenas.

Giquel and her colleagues made the first observations of how spotted hyenas (Crocuta crocuta) living in the Serengeti are adapting to these changes. Hyenas are Africa’s most widespread large carnivores and play a huge role in a large number of ecosystems in almost all of its regions.

Giquel and her colleagues are interested in whether these shifts have affected how successfully hyenas feed their offspring.

Ecologists have been concerned that each clan of hyenas collectively raises cubs in large underground dens, many of which could be at a considerable distance from prey migration routes as a result of global warming.

European researchers have received answers to these questions in the course of thirty years of observation of the life of three clans of hyenas living in the Serengeti.

During these observations, the scientists tracked how often the females fed milk to their three-month-old cubs, in principle, able to eat solid food. This behavioral trait of hyenas, scientists explain, is a sign of their good caloric supply.

As it turned out, the frequency of feeding cubs with milk has not changed much over the past three decades, despite a two-fold reduction in the number of migrating antelopes and zebras and a sharp decrease in the frequency of their migrations through the national park.

Similar trends were equally characteristic of both dominant females and subordinate individuals, which indicates the absence of problems with access to resources.

According to scientists, the results of their observations indicate that the hyenas have adapted to the situation and successfully changed hunting strategies related to the search and capture of prey at close and far distances from their lair. 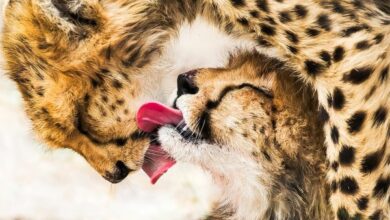