(ORDO NEWS) — Icebergs are floating masses of ice that are born when separated from glaciers on the seashore and disappear as they gradually melt into warmer sea water.

The new article recreates the journey of three and a half years of one of the largest icebergs – A-68.

Antarctica is a large continent at the South Pole, most of which is covered by a very thick ice sheet. This huge mass of ice slowly flows from the center to the shores, where it gradually becomes thinner, goes out into the sea and breaks off, forming floating ice blocks – icebergs.

In July 2017, an exceptionally large iceberg, named A-68, sailed off the edge of the Larsen C Ice Shelf on the Antarctic Peninsula in the same way.

Then it became the largest of the existing icebergs and the sixth largest in three decades of observations. The A-68 area was equal to 5800 square kilometers.

Only three and a half years later, this iceberg broke up into pieces and completely melted, having a noticeable impact on that part of the ocean where everything happened – the water area of ​​the island of South Georgia, from where this picture could only be observed by seals and penguins from the tundra-covered shores.

“Icebergs serve as a source of fresh water and nutrients for the Southern Ocean. says Anne Braakmann-Folgmann, PhD student at the University of Leeds (UK).

“However, where and in what quantity they are released is not very well understood and has not yet been taken into account in ocean models, and this is especially true for large icebergs.”

Anna and her colleagues decided to establish the trajectory of the iceberg, which later became known as A-68A. A new name was required after several significant pieces fell off the original A-68.

All these parameters of the A-68A were received for the period from July 2017 until its rapid destruction in January 2021. 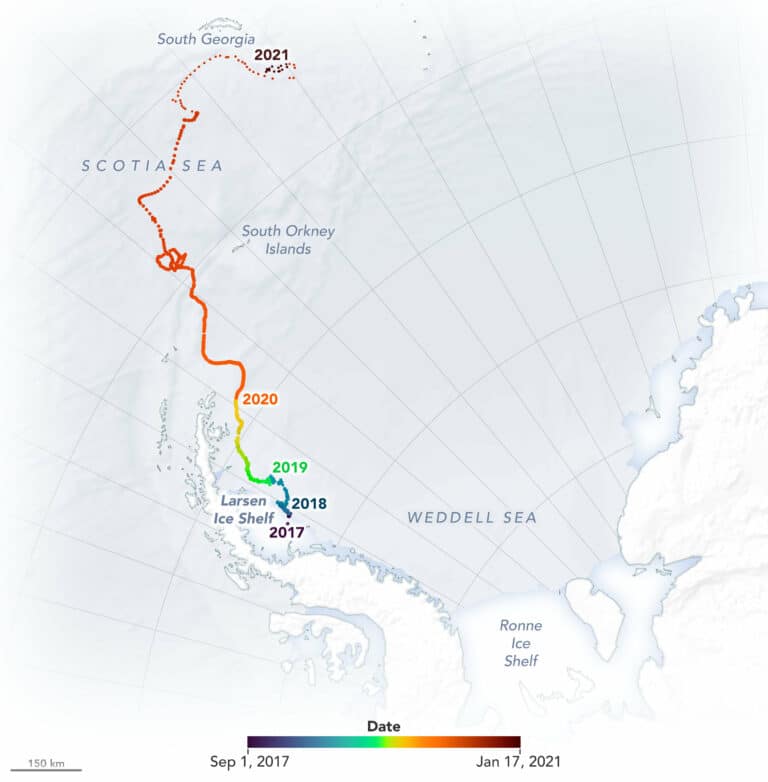 The authors compiled maps of the iceberg in certain periods of its biography. The first of these corresponds to the time when A-68 was still near the Larsen Ice Shelf.

It shows that the left side of the iceberg is much thicker – it was the edge that was adjacent to the glacier. At the same time, the part facing the sea was noticeably thinner.

Then the thickness of the A-68A averaged 235 meters. But then the iceberg began to drift north, and off the coast of South Georgia, this block of ice “thinned” to 168 meters.

As one popular saying goes, only the tip of the iceberg is visible on the surface. To be precise, about 15 percent.

It is this part that researchers have to be guided by when studying the general shape of the iceberg, including the notorious A-68A, the underwater part of which had to be reconstructed using calculations.

Other calculations by the same scientists showed that from July 2017 to January 2021, the A-68A lost 32% of its mass due to melting in the lower part.

The strongest torrents of water flowed from an iceberg near South Georgia Island : the researchers calculated that in just about three months it released 152 billion cubic meters of fresh water.