(ORDO NEWS) — Huge pieces of ice scattered across the poles are one of the most important temperature regulators on the planet. Glaciers keep the surface from overheating and contain the oceans that could flood the land.

Recently, the blocks have begun to actively melt, which directly affects the lives of people around the world. They face natural disasters, suffer from heat and are on the verge of death.

Scientists predict a deterioration in the situation: the Earth can turn into endless tropics and deserts, and humanity will be left without fresh air. Harsh breathing – in the material “Lenta.ru”.

Scattered around the world

Due to climate change, glaciers are melting in different parts of the world. Most of them are concentrated in a unique physical and geographical region – the Arctic at the North Pole, which covers the outskirts of Eurasia, North America, as well as the Arctic Islands, parts of the Atlantic and Pacific Oceans.

Important ice sheets are located on the continent of Antarctica in the southernmost part of the planet. Ice in the Himalayas, the Alps, the Hindu Kush, the Pamirs and the Tien Shan are also considered indicators of global warming.

Both shields contain over 99 percent of the Earth’s freshwater ice. Thick ice forms where there is enough snow in winter that does not have time to melt in the summer months – as a result, snow layers accumulate over time. The formation of glaciers also involves ice crystals that form in the ocean, and salts thrown to the surface of the water.

However, in the past few years, scientists have noticed a failure in the process – the accumulating snow due to global warming melts more and more every year, reducing the area of glaciers.

For decades, experts from the American space agency NASA have been monitoring the change in ice sheets using satellites. They found that the ice in Antarctica and Greenland has been shrinking since 2002. The former annually lose 152 billion tons in mass, and the latter – 274 billion tons.

A decrease in the mass of ice sheets is recorded by scientists around the world. In June 2022, experts from the University of Maine, the British Antarctic Survey and Imperial College London concluded that Antarctica’s glaciers were retreating at a rate not seen in the last 5,500 years.

Today, the rate of land fall relative to sea level is five times greater than in the middle of the Holocene According to scientists, the dynamics indicate a recent mass loss of glaciers.

The decrease in ice sheets often beats its records. In February 2022, Chinese scientists recorded less than two million square kilometers of ice in the southern hemisphere, the worst figure since 1978, when observations began.

The anomalous melting of ice affected the Antarctic seas of Bellingshausen, Amundsen and Weddell. Moreover, in comparison with the average value for 1981-2010, the amount of ice was 30 percent less.

Scientists are also concerned about the loss of the cover of Elbrus – the glaciers of the mountain peak in the last five years began to melt five times faster, every year they lose 1.25 square kilometers.

Glaciers are shrinking due to rising temperatures even in the coldest parts of the Earth. Climate change is causing cold regions, while not becoming tropics or deserts, to experience major temperature changes. So, in Antarctica in the spring it was 35 degrees Celsius hotter than usual.

“If earlier during this period the temperature was from minus 45 to minus 50 degrees, now it is only minus 15 degrees Celsius. And this does not inspire optimism. The world is on the brink of a natural disaster,” said French documentary maker Geraldine Danon.

An increase for Antarctica was considered significant – the previous record of 11.7 degrees was recorded in 1985. The most rapidly warming place on the planet is considered to be the north of the Barents Sea on the outskirts of the Arctic Ocean.

For a decade, the temperature there rises to 2.7 degrees Celsius. At the same time, the melting of glaciers is caused not only by solar radiation. Dry winds (foehns) and cloud cover are also considered important factors, which directly affect the energy balance of the surface.

Scattered across the poles, glaciers are not just huge chunks of ice created by very low temperatures. They perform a number of important functions, without which life on the planet would be unbearable for most living organisms.

First of all, glaciers are powerful reflectors of sunlight – they remove up to 90 percent of radiation from the Earth’s surface, preventing the planet from turning into a hot ball.

Sometimes the principle of operation of glaciers is compared with air conditioning, as they maintain a temperature balance. It is this function that has been threatened by climate change, since with the melting of glaciers, the surface of the Earth will be more difficult to cool.

Blocks of ice hold a large volume of water – if it is in a liquid state in the ocean, then the average world sea level will rise, and vast areas will be flooded.

Glaciers are often referred to as living laboratories, home to unique animal species. In Antarctica, there are 15 species of whales and dolphins, 5 species of penguins, including emperors, which are in a vulnerable position and need protection.

The coastal waters of the glaciers are filled with a lot of plankton. Animals are interconnected by a food chain, the disappearance of one link of which can lead to the collapse of the entire system and the loss of unique organisms.

The Antarctic region and the Arctic serve as bases for the work of scientists from all over the world. Experts monitor the change in glaciers, compare existing data, which helps them understand how life was on the planet thousands of years ago, and also predict what awaits humanity in the future.

Glaciers are gradually becoming a unique tourist attraction, not yet battered by crowds of travelers. Every year about 30 thousand tourists and numerous expedition members come to Antarctica.

Antarctica still amazes me. It is huge, distant, mysterious and so beautiful that it is hard to imagine.

But it is also fragile and vulnerable to the effects of climate change and fisheries.

I’ve been working for 20 years to keep Antarctica safe for future generations.

In connection with the ability of glaciers to contain the rise in the average world sea level, the Thwaites Glacier in West Antarctica is of particular concern – a cold block moves too actively and has the most impact on the rate of flooding, which is why it is called the Doomsday Glacier.

At the current rate of ice sheet retreat, sea levels could rise by a catastrophic 3.4 meters over the next few centuries. Some experts predict more serious problems – scientists at the University of Oregon have calculated that the Thwaites Glacier could completely collapse in the next five years.

As a result, he will no longer be able to hold back the masses of water, and the sea level will rise by 0.6 meters.

Such prospects most of all threaten the island states, which in the future may be flooded. In the Pacific nation of Tuvalu, for example, sea levels rise by about four millimeters each year, with the country’s highest point at four meters above sea level, and most of the island at one meter.

In the event of the melting of important glaciers, some regions of Tuvalu may simply cease to exist. A similar situation is with the Maldives with the highest point of 2.4 meters. The resort could be completely flooded by 2100 if sea levels rise by 1.1 meters.

Global warming caused by human activity directly affects the state of glaciers on the planet. Scientists have identified a connection that glaciers began to lose mass against the backdrop of industrial revolutions in the US and Europe. Sea level rise due to melting glaciers began in 1863.

The mid-Atlantic region of the United States experienced signs of warming at the end of the 19th century, and Canada and Europe by the middle of the 20th century. 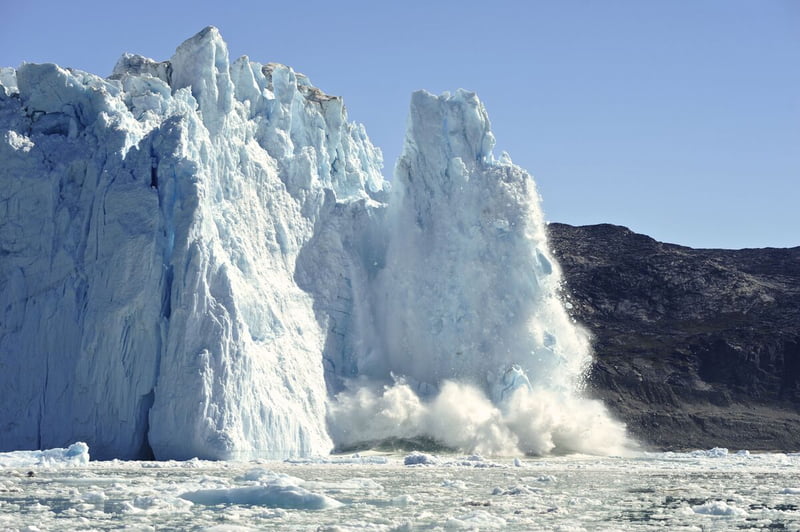 In many ways, thoughtless development of production affects the ice and, as a result, the lives of people around the world. As a result of melting, glaciers gradually lose the ability to regulate the temperature on Earth normally and actually serve as lightning rods.

As a result, the circulation of air masses changes in the atmosphere, which leads to natural disasters. Humanity has been steadily confronting them over the past few years – different regions of the world are being hit by abnormal heat, which is replaced by storms and hurricanes.

Scientists assume that changes will progress. The consequences of melting lead to a real vicious circle – due to the disappearance of the upper layer of the planet, harmful substances enter the atmosphere, including methane and carbon dioxide. They heat the Earth even more, increasing the melting of glaciers.

Hurricanes in the US, wildfires in Siberia and Australia, summer snowfalls, droughts – we are already living with these effects of global warming, we do not have to wait decades to notice them.

Changes in the ice cover also cause serious damage to the infrastructure of cities in which roads are flooded, utilities and buildings are damaged. In the future, several million dollars will be required to restore the once built-up area.

The tourist infrastructure is also suffering from the melting ice – on the Khumbu glacier in Nepal, a camp will be lowered by 400 meters, from where climbers set off to conquer Everest. Recently, athletes began to notice cracks in the ice and falling stones from above. For safety, the location was changed.

An increase in temperature in the Arctic will also affect Siberia – experts from the Alfred Wegener Institute (AWI) have concluded that global warming will lead to the disappearance of part of the Siberian tundra with unique flora and fauna.

Some countries are already trying to save the glaciers and the regions where they are located. In Sweden, they came up with the idea to keep the cold with a special blanket – in the warm season, the Helags glacier was covered with a special tarpaulin that reflects sunlight and keeps ice under it. Otherwise, the surface would lose three meters of height.

At the poles, they try not to pollute the territory and keep nature almost untouched. Since 2011, vessels that use or transport fuel oil have been banned from entering the waters of Antarctica – the consequences of its spill are especially difficult to eliminate. Scientists urge to continue to take care of the region.

Glaciers can be compared to animals on the verge of extinction – they are almost invisible, but their disappearance will be a strong blow to the Earth.

Comprehensive work is needed to combat climate change, and the preservation of ice blocks in different parts of the world should be one of the most important stages. Otherwise, humanity will have to live in conditions of abnormal heat and deal with numerous disasters that will happen more and more often.