(ORDO NEWS) — This unusual phenomenon was recognized only a few years ago, and even doctors do not yet know what exactly they faced. It does not even have an official name and it can be either a form of mental illness or some kind of brain anomaly.

Young children often come up with imaginary friends to cope with a feeling of loneliness or just enjoy their own fantastic world.

They see and hear their imaginary friends with an enviable enthusiasm that most adults will never understand. When children get older, imaginary friends disappear, but sometimes something happens and “imaginary” voices do not leave a person even after growing up.

You might think that we are talking about some kind of mental illness, such as schizophrenia. But no, the doctors claim that there is something else. According to doctors, approximately one out of twelve children hears voices in the head , but there are very few who have heard voices in childhood and when they are old enough.

One such person is the 23-year-old Laura Molding. She began to hear voices in her head from the age of three, and this continues to this day. Voices still surround her almost around the clock and every day, these are the voices of men, women or children.

It all started with the fact that the girl suddenly began to hear the voices of a lion cub and a teddy bear from her favorite children’s TV show. These voices sounded in her head and they kept repeating the same phrase, “I am coming for you.” This went on so often that the girl was very scared. But that was only the beginning.

When Laura was 15 years old, the voices in her head began to bother her and her family so much that Laura was taken to a psychiatrist. By that time, the girl was already so pissed off that she was trying to commit suicide, just to not hear these voices.

Voices constantly told her that she was useless, meaningless, and that no one loved her. They repeatedly mentally attacked the girl, introducing her into a state of depression.

“It’s like you are in a crowded room. You hear different voices and they attack you. They are male, female and children’s at once and it all sounds like some kind of monster from the Doctor Who series,” says Laura.

“And they kept telling me that I was a useless creature.” 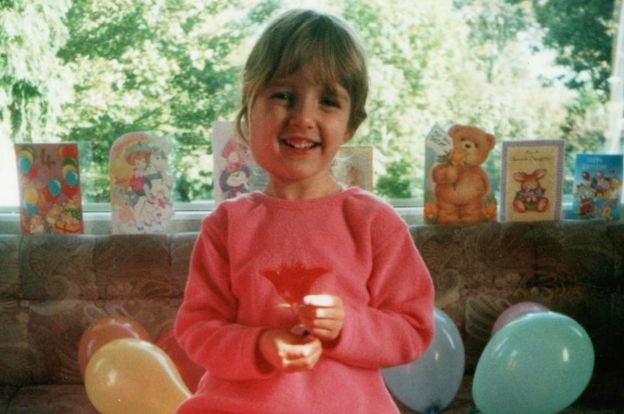 Laura Molding as a child

When the girl first spoke about the voices of her parents, they first decided that she simply came up with an imaginary friend. Therefore, the girl became isolated in herself and for the next several years she worried everything silently, without telling anyone.

As a result, Laura was diagnosed with a complex depression with psychotic symptoms such as hallucinations, delusions and restless thoughts. Now the girl has learned to cope with her voices with the help of drugs or using music to drown them.

Another similar victim is the 13-year-old Tia , whose real name and surname are hidden at her request. She has a slightly different experience. At 7, she first noticed that she could hear voices that no one else could hear.

At first it was her mother’s voice, which she heard when her mother was generally elsewhere. Then she began to hear the screams of a man, and then she heard the electric poles in the distance humming.

Voices often told jokes and Tia laughed, but sometimes they led to big problems at school. The girl tried to silence the voices, but from the outside it looked like she was talking to herself.

The girl’s mother believes that everything started after she became very ill herself and Tia began to have stress because of this, which affected her consciousness. But anyway, now Tia no longer hears any strange voices, they disappeared suddenly, as they appeared.

At the moment, even doctors do not know what these mysterious cases with voices in the head are. Children with voices in their heads, which parents bring for treatment, can be sent in completely different ways – prescribe pills, therapy with a psychiatrist or psychologist, check if the “voices” are caused by tumors in the brain, etc.

The man at the time of clinical death visited Hell

The man at the time of clinical death visited Hell