(ORDO NEWS) — Once upon a time, crocodiles not only swam in rivers, but also hunted our ancestors on earth, like wolves and bears. Eighteen million years ago, such a predator roamed East Africa, reaching a length of four meters.

In Central and West Africa , one of the smallest representatives of these reptiles can be found today . The length of an adult rarely exceeds one and a half meters, and a baby crocodile hunts for small vertebrates like fish and frogs, and even large snails.

However, 18 million years ago, a close relative of the blunt-nosed crocodile lived in Africa, reaching almost four meters in length. This is one of the largest predators of its time, representing a direct threat to all animals that it encountered.

The new species was named Kinyang mabokoensis : “kinyang” means “crocodile” in the Nile languages ​​of Africa, and the specific name of the animal is a reference to the island of Maboko, where his bones were found.

The crocodile had a rather short muzzle and large teeth: apparently, its bite must have been incredibly strong, so this predator did not hunt for fish, but for large land animals.

It is also curious to note that the nostrils of the kinyan were not directed straight up, as in most modern crocodiles, but rather forward: this is evidence of a terrestrial hunter who lay in wait for prey not in the water, but in coastal thickets.

Most likely, the habitats of these animals were forest rivers and lakes with densely overgrown banks, where other animals came to drink. Most likely, our direct ancestors were among the victims of the kinyan: in his era, early apes already appeared on Earth.

Why did the kinyan and its relatives eventually disappear, leaving behind only dwarf, completely aquatic, blunt-nosed crocodiles? The reason, most likely, is climate change: about 15 million years ago, East Africa, where the Kinyang lived, became drier, and dense forests were replaced by savannahs.

Being a forest dweller, this crocodile could not adapt to new conditions and eventually died out, completely yielding the “position” of a land predator to large mammals. 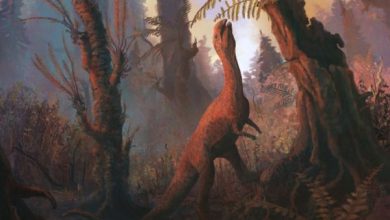