(ORDO NEWS) — A massive mountain of frozen mantle rocks, hidden off the coast of the island of Honshu, causes deformations and stresses in the earth’s crust, giving special power to neighboring earthquakes.

If mantle rocks rise from depth to the upper layers of the crust, they can solidify there, forming plutonic massifs that are dense and contrast sharply with their geological environment.

This is how, for example, the Khibiny on the Kola Peninsula were formed. And off the southeast coast of Honshu, Japan’s largest island, the Kumano Pluton was discovered in 2006, hidden beneath the surface.

This pluton is in a subduction zone, where one block of the earth’s crust goes under another, stimulating high geological activity and frequent earthquakes. He himself serves as an “amplifier” of these shocks, making them more dangerous.

This conclusion was made by geologists from the United States and Japan, who for the first time studied the Kumano pluton in detail. Their article is published in the journal Nature Geoscience . 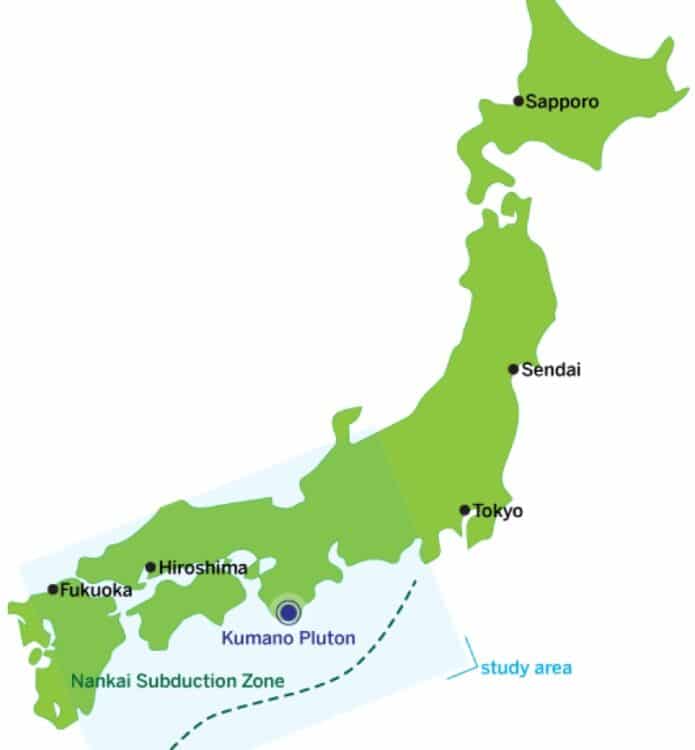 Adrien Arnulf of the University of Texas and his colleagues analyzed data from more than 20 years of seismic monitoring. The nature of the passage of seismic waves through the Earth’s thickness varies depending on the density and other characteristics of the rock.

After collecting a huge array of millions of such records, scientists used the LoneStar5 supercomputer and obtained a detailed three-dimensional model of the Kumano pluton and its surroundings.

As it turned out, the pluton is so dense and large that its mass causes local deformation of the earth’s crust, bending it. This depression allows water to seep down into the upper mantle.

In addition, it creates additional stresses in neighboring plates of the lithosphere. This intensifies earthquakes, the epicenters of which are located near the Kumano pluton. Not without reason, in 1944 and 1946, shocks with a magnitude of more than eight were registered very close to it.