During the Eocene, between 55 and 34 million years ago, Western Europe was separated from Central Asia, and their animal life was very different.

In Europe, there were now extinct paleotheres, in Asia – many ancient representatives of mammals that exist today. Key changes occurred about 34 million years ago, when the earth’s biosphere experienced extinction , albeit by no means the largest.

By the end of this time , many primitive mammals disappeared and the former inhabitants of Europe were replaced by newcomers from Asia. The fauna has assumed a more or less modern form.

However, the path of animals to Western Europe had to pass through the extremely unfavorable northern regions, and how exactly the Asian mammals made it is not very clear.

They may have crossed the bottom of what is now the Eastern Mediterranean, which during the Eocene-Oligocene extinction period remained a land bridge and directly connected the Near East with Central and Western Europe.

Evidence of the short existence of the Balkanatolia continent was discovered by Alexis Licht and his colleagues from the French National Center for Scientific Research (CNRS). 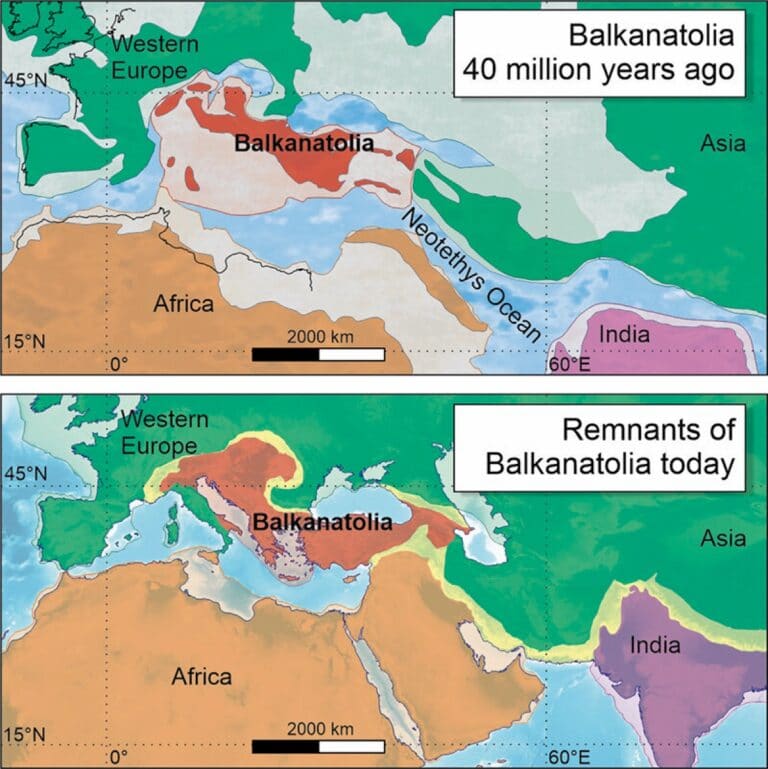 Scientists examined many fossils of the corresponding period, which were found in the region of the European Balkans and Turkish Anatolia, following the changes in the local fauna.

This paleogeographic reconstruction revealed the complex history of the region, which experienced a series of submergence and new uplifts with the temporary formation of a small continent.

About 50 million years ago, it was isolated from its neighbors and inhabited by exotic animals that differed from the inhabitants of both Europe and Asia.

However, then cooling, the growth of polar ice caps and lowering sea levels freed up new land areas, and Balkanatolia connected the current Middle East directly with Central and Western Europe.

Judging by the remains found, it was through it that Asian animals, including rodents and ungulates, could penetrate into Europe.

Dating shows that this process began even before the Eocene-Oligocene extinction, which only completed the displacement of European endemics by newcomers from Asia.