(ORDO NEWS) — Geologists at Utrecht University are working to unravel the secrets of plate tectonics, the mechanism that continuously shapes the earth’s crust and causes earthquakes and volcanic eruptions. This time, another secret has been revealed.

There were “short” periods of a few million years in the Earth‘s geological past, during which many tectonic plates around the world suddenly changed their speed and direction.

What caused the drastic changes in plate movement?

Now geologists have managed to find evidence to support this.

“With this discovery, we can better understand the driving forces behind plate movement and thus processes such as mountain formation or volcanism,” the scientists write in their paper, published in the journal Nature Geoscience. 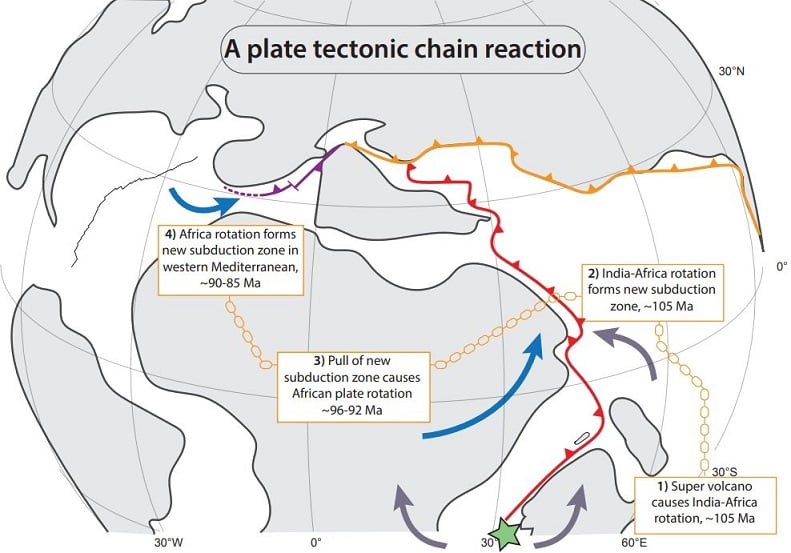 To test their hypothesis, the researchers asked themselves the following question: did the formation of a new subduction zone north of Arabia, which was caused by a mantle plume that caused a supervolcano near Madagascar ~100 million years ago, set off a chain reaction? Scientists analyzed the consequences of this event step by step.

“If our hypothesis is correct, then a new subduction zone formed north of Arabia should have generated forces that accelerated and rotated the African Plate 10 million years after the subduction began. However, in order to analyze this, we had to solve a serious problem,” says Guerer.

Like a tape recorder, the history of past plate movements is archived in the ocean’s magnetic crust. Once rocks are formed as magma cools under the ocean floor at mid-ocean ridges, they record and store the Earth’s magnetic field.

When the magnetic field changes, it points in the opposite direction in younger rocks than it does in older rocks. Thus, the oceanic crust contains a magnetic archive reconstructed in a barcode of changing black and white patterns. This archive allows you to reconstruct the movement of tectonic plates in the distant past.

But between 125 and 83 million years there was no change in the magnetic field.

“In the oceanic crust formed during this period, the magnetic field therefore points in the same direction everywhere. It forms a so-called magnetic quiet zone,” Van Hinsbergen explains.

Until now, it has not been possible to reconstruct changes in plate movement during this time interval. But 10 years ago, Roy Granot discovered that rocks in the Central Atlantic Quiet Zone do register abrupt changes in magnetic noise.

“By applying the methods we normally use for magnetic inversions to changes in magnetic noise, we were able to significantly improve the plate model.

This showed that the African plate was indeed accelerating and rotating as the new subduction zone began to pull,” Granot says.

“This is the first time evidence of a plate tectonic chain reaction has been found. With this study, we have identified a mechanism that explains why there are short periods of time during which the plates suddenly change direction.

These plate movements influence the formation of mountains, sea locks, volcanism and even the global climate,” Guerer says.

Research by an international team of geoscientists will help unravel the mechanisms underlying plate tectonics. The plate tectonic chain reaction triggered by a supervolcano illustrates how the movement of tectonic plates is ultimately driven mainly by the forces of subduction plates that sink into the Earth’s mantle.

It was possible to establish the exact place on Mars, from where a meteorite flew to Earth

It was possible to establish the exact place on Mars, from where a meteorite flew to Earth