(ORDO NEWS) — The biologists assembled the dingo genome de novo and compared it to the genomes of five domestic dog breeds. It turned out that dingoes are a sister group to domestic dogs. The scientists also found differences in genes associated with nutrient metabolism between dingoes and domestic dogs.

In addition, differences in microbiomes were found. The results obtained suggest that dingoes and domestic dogs have adapted to different types of food in the course of evolution.

The dingo is a unique lineage of dogs as it has been isolated from both wolves and domestic dogs for several thousand years. Dingoes appeared in Australia about 5-8.5 thousand years ago and became top predators after the extinction of the marsupial wolf.

In 1788, domestic dogs were brought to Australia, which began to interbreed with dingoes, but recently scientists have found that these crossings occur infrequently and there are still quite a lot of purebred dingoes in Australia.

There are different points of view on the classification of dingoes, but recently scientists are inclined to believe that they, along with domestic dogs, belong to Canis familiaris. At the same time, the dingoes themselves are divided into two ecotypes: desert and alpine.

Previous genetic research on dingoes and domestic dogs has been inconsistent. Some scientists have concluded that dingoes are a sister group to all domestic dogs.

Others have found that dingoes are related to New Guinea singing dogs, but have not been able to establish an exact relationship with domestic dogs. A third group of researchers placed the dingo in a clade containing several ancient dog breeds.

Matt Field (Matt A. Field) from James Cook University and his colleagues from Australia, Germany, Denmark and the USA collected de novo the genome of the desert dingo and compared it with the genomes of five breeds of dogs: the Bassenji (considered the most primitive breed), German Shepherd, Labrador Retriever Retriever, Boxer and Great Dane.

The scientists chose the bowhead wolf (Canis lupus orion) as an outgroup because it is basal to both dogs and Eurasian wolves and has the highest quality wolf genome published. In addition, the genomes of bowhead wolves have a low percentage of genes from other canids.

Phylogenetic analysis has shown that dingoes are a sister group to domestic dogs. Biologists have also found that dingoes have only one copy of the AMY2B gene, which is consistent with early research.

This gene codes for amylase, an enzyme that breaks down starch. Most domestic dogs have multiple copies of this gene. 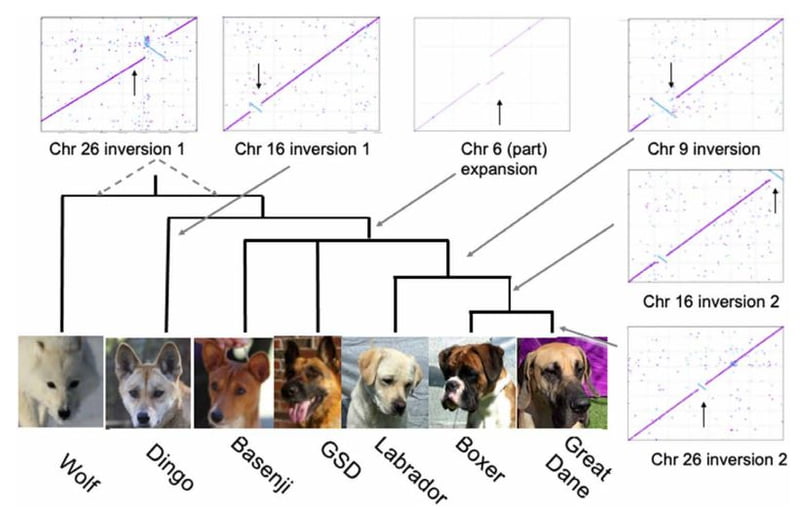 The scientists then compared the genomes of the dingo and the German shepherd and found differences in the methylation of the promoters of several genes, in particular, a reduced level of methylation of the GAL3ST1 gene promoter, which indicates an increased transcriptional activity of this gene associated with galactose metabolism.

To confirm the genetic data, biologists conducted an experiment during which 17 dingoes and 15 German shepherds were fed the same food. Blood samples were then taken from the animals and dingoes were found to have lower amylase levels than shepherd dogs, consistent with genetic data.

In addition, the levels of total cholesterol and low-density lipoprotein on the 15th day of the experiment in dingoes were significantly higher. The scientists also took fecal samples from the dogs and analyzed the microbiome.

It turned out that the bacteria of the families Lactobacillaceae, Ruminococcaceae and Prevotellaceae, involved in the breakdown of starch, were more numerous in German shepherds. Biologists have suggested that differences in microbiomes are due to the genome.

Field and colleagues’ results suggest that domestic dogs have adapted to human diets, which are high in starch and fat. Dingoes, on the other hand, evolved in Australian ecosystems, where they adapted to feeding on marsupials and reptiles – a diet high in protein and low in fat and carbohydrates.