(ORDO NEWS) — An international team of scientists announced the discovery of the most distant and ancient galaxy. Its nature is still a mystery to astronomers. The bright glow of the object can be explained by the peak of star formation or the presence of a supermassive black hole.

The study of the formation of the first galaxies is one of the main goals of modern astronomy. Scientists hope that this will confirm the hypotheses about the first generation of stars and figure out how supermassive black holes could form in a short time, by astronomical standards. Fortunately, the deeper we look into space, the more ancient objects we can study.

Today, the oldest galaxy is considered GN-z11 , located 13.4 billion light-years from us. The new candidate, according to the authors of the study, is 100 million light-years further away. It turns out that this galaxy formed when the universe was only 300 million years old.

Scientists will publish a description of the new object in the Astrophysical Journal . In an accompanying article to be published in MNRAS Letters , the group put forth speculation about the nature of the object.

The discovered distant galaxy was named HD1 . In the picture, it looks like a small red dot, but in reality it glows brightly in the ultraviolet range, which indicates high-energy processes taking place in it.

At first, scientists took HD1 for an ordinary galaxy at the peak of star formation. However, further analysis showed that at this brightness, more than 100 ordinary stars should be born there every year. This is at least ten times more than expected from similar galaxies. Then astronomers began to suspect that these were not the stars we are used to.

According to scientists, the first stars in the universe were much more massive, brighter and hotter than the usual stars. This hypothetical first generation of stars Population III should have been very bright in the ultraviolet range.

“The properties of HD1 are much easier to explain if we assume that first-generation stars were born there,” explained Fabio Pacucci , an astronomer at the Harvard-Smithsonian Center for Astrophysics (USA). 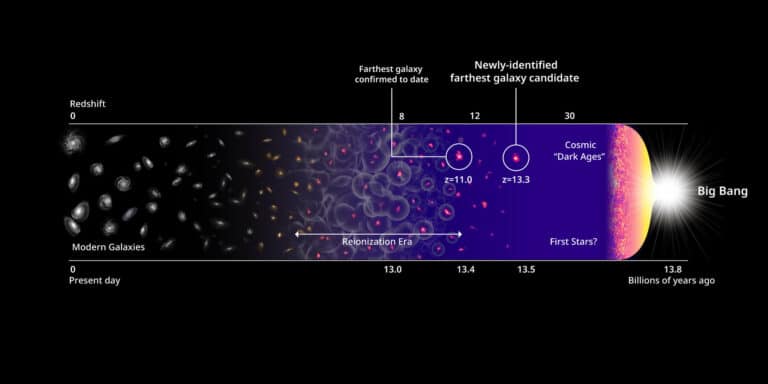 The authors also found an alternative explanation. HD1 could be a quasar. Then its ultraviolet brightness is explained by the presence of an active supermassive black hole. The existence of such massive objects in the young Universe remains one of the main problems of modern astrophysics. Unfortunately, it is difficult to study this object with modern instruments.

Galaxy HD1 was searched among more than 700 thousand objects. The researchers used data from over 1,200 hours of observations from the Subaru, VISTA , UKIRT and space Spitzer telescopes.

Lead author of the discovery, astrophysicist Yuichi Harikane , says he “got goosebumps” when he spotted the galaxy : .5 billion light-years away.” The team then refined the object’s distance through additional observations with the ALMA radio telescope .

So far, there is little we can learn about the nature of HD1 . Astronomer Fabio Pacucci compared the search for answers to trying to “guess the nationality of a ship from its flag while on a distant shore while the ship is in the midst of a storm and dense fog.” In general, a long analysis and consistent refutation of all possible hypotheses are required.

The team plans to retest the distance estimate soon with the James Webb Space Telescope, which is currently undergoing a tuning and testing period. The new observations will provide astronomers with additional data for HD1 analysis .

“In order to form just a few hundred million years after the Big Bang, the black hole in HD1 had to grow at an incredible rate,” says astrophysicist Avi Loeb , co-author of the second study. “As always, nature turned out to be much more inventive than us.” 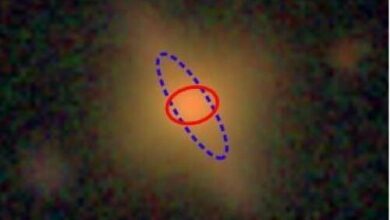 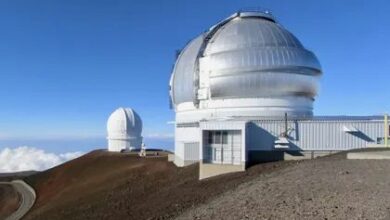