The fort is believed to have been built by Cenél nEógain, a branch of the northern Uí Néill dynasties in the 8th or 9th century, and served as the main residence of the Ayleh kings who ruled the medieval Irish province of Aileh, also known as the Kingdom of Aileh.

According to Irish mythology, the construction of the fort is attributed to Dagda (meaning “good god” or “great god”), the deity and famous king Tuatha De Danann, who was associated with fertility, agriculture, masculinity, strength, as well as magic, druidry and wisdom.

The Great Book of Lecan, a medieval Irish manuscript from the 14th or 15th century AD, verse 38 of the Ordnance Memoir of the parish of Templemore describes how a fort was erected around the grave of Dagda’s son, Aedh, who was assassinated by Connacht chieftain Corrigan.

Archaeological evidence suggests that the fort is located on the remains of an earlier Iron Age settlement that dates back to around 1000 BC, with evidence of earlier settlement in the Early Bronze Age and possibly the Neolithic.

Three concentric ramparts of earth and stone follow the shape of the summit of Mount Greenan, forming an irregular circular pattern, and surround a central platform, which was probably used by Senel Neogain for inaugurations and other royal ceremonies.

Historians suggest that the monument was designed not so much with a defensive function because of the impracticality of repelling invaders, but was built as a symbol of royalty.

According to Irish chronicles, Grianan of Aileach was destroyed in 1101 AD. Muirchertach Wa Bryan, King of Munster and rival of King Cenél nEógain Domhnall Wa Lochlein.

In the 1870s, significant restoration and renovation work was carried out using some of the fallen stones and many other stones quarried locally. 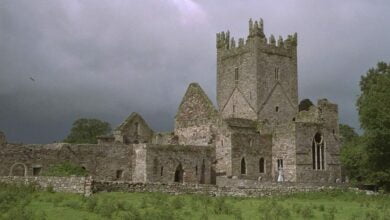