(ORDO NEWS) — On April 28, 2021, NASA’s Parker Solar Probe actually flew into and through the solar corona, the Sun’s upper atmosphere. He not only survived, proving the effectiveness of Parker’s high-tech thermal protection, but also carried out measurements on site, providing us with a lot of previously unknown data about the heart of our solar system.

“The touch of the Parker probe to the sun is a monumental moment for solar science and a truly remarkable feat,” said astrophysicist Thomas Zurbuchen, assistant administrator for Science Missions Office at NASA headquarters.

“This milestone not only gives us a deeper understanding of the evolution of our Sun and its impact on our solar system, but everything we learn about our own star allows us to learn more about the stars in the rest of the universe.”

The Parker Solar Probe launched in 2018 with its primary goal of exploring the solar corona. On a planned seven-year mission, it is to make a total of 26 encounters, or perihelion, with the Sun, using a total of seven gravity assist maneuvers from Venus to bring it even closer. April perihelion was the eighth, and the first when the craft actually entered the corona.

For nearly five hours in the solar atmosphere, Parker measured the fluctuations in the sun’s magnetic field and took particle samples. Previously, our estimates of these properties depended on external information.

“By flying so close to the Sun, the Parker Solar Probe now experiences conditions in the solar’s magnetically dominant atmosphere – the corona – that we have never seen before,” said astrophysicist Noor Rauafi, a Parker project scientist at the Johns Hopkins Applied Physics Laboratory.

“We see evidence for corona in magnetic field data, solar wind data and visually in images. We can see the spacecraft flying through coronal structures that can be seen during a total solar eclipse.” 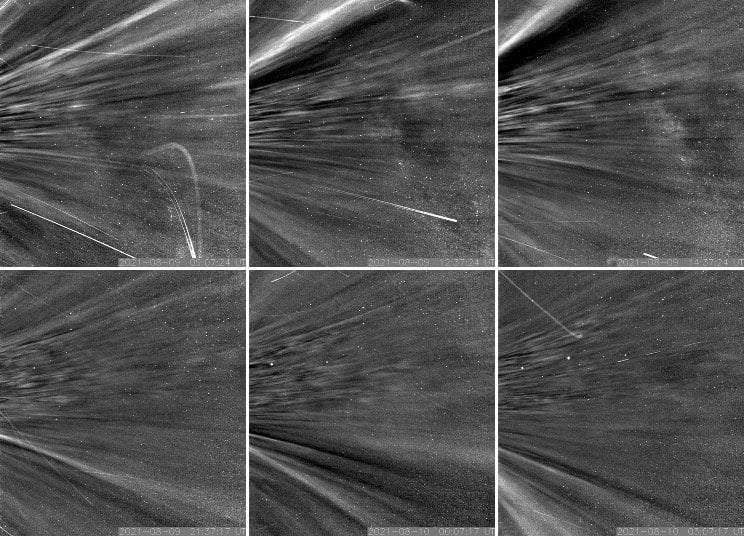 Above: The bright elements visible in the images here are coronal streamers, which are usually only visible from Earth during an eclipse. They were received by the Parker probe during the ninth perihelion in August this year.

The sun has no solid surface. Instead, its boundary is defined by the so-called Alfvén critical surface, where the sun’s gravity and magnetic fields are too weak to contain the solar plasma.

Above this point, the solar wind arises, which blows powerfully through the solar system, so fast that the waves inside the wind break away from the sun. What we call the “surface” of the Sun, made up of roaming plasma with convective cells and known as the photosphere, lies much lower.

One of Parker’s goals was to find out more about the Alfvén critical surface, namely where it is and what its topography is, since we did not know either one or the other. Alfven’s critical surface is estimated to be somewhere between 10 and 20 solar radii from the center of the Sun. Parker entered the corona at a distance of 19.7 solar radii, dropping to 18.4 solar radii during his corona journey.

Interestingly, the probe appears to have sporadically encountered the magnetic conditions of the corona, suggesting that Alfvén’s critical surface is wrinkled. At a shallower depth, Parker collided with a magnetic structure known as a pseudo streamer, which we can observe as an arc emerging from the Sun during solar eclipses. Parker’s data suggest that these structures are responsible for the deformation of the Alfvén critical surface, although at present we do not know why.

The conditions inside the pseudo streamer were quieter than in the surrounding solar atmosphere. The particles were no longer buffering the spacecraft so chaotically, and the magnetic field was more ordered.

Parker also investigated a phenomenon known as “solar switching”. These are Z-shaped kinks in the magnetic field of the solar wind, and it is not currently known where or how they form. We’ve known about reverse crossovers since the 1990s, but it wasn’t until Parker researched them in 2019 that we learned that they are quite common. Then, during the sixth flyby, the probe data showed that the switches originate from the spots.

Now Parker has discovered them within the solar atmosphere, suggesting that at least some of the switches are from the lower corona.

“The structure of the switched regions coincides with the structure of a small magnetic funnel at the base of the corona,” said astronomer Stuart Bale of the University of California at Berkeley, lead author of a paper on the phenomenon in The Astrophysical Journal. “This is what we expect from some theories, and it points to the source of the solar wind.”

We still do not know how these curious structures formed, but since there are still dozens of perihelions ahead, located at a distance of 9.86 solar radii from the center of the Sun, we are likely to get some very exciting answers.

“We have been observing the Sun and its corona for several decades, and we know that there is interesting physics going on there that heats up and accelerates the plasma of the solar wind. However, we cannot say for sure what kind of physics it is,” Rauafi said.

“With the Parker Solar Probe now flying into the magnetic-dominated corona, we will have a long-awaited insight into the inner workings of this mysterious region.”

The study was published in the journal Physical Review Letters.

Ancient people did not eat meat

Ancient people did not eat meat