(ORDO NEWS) — Recently, US scientists found that people aged 65 and older who were vaccinated against the flu had a 40 percent lower risk of developing the most common form of dementia, Alzheimer’s disease.

The purpose of vaccines is to prevent dangerous infections. After vaccination, the immune system reacts to the introduced “dummy” of the pathogen and “remembers” it.

Then, when real viruses or bacteria enter the body, the immune system quickly recognizes and neutralizes them.

But the human body is one of the most complex systems on earth, everything is interconnected in it, so the benefits of vaccines are not always limited to infection prevention alone.

Scientists from the Health Center in Houston, US found that even a single flu shot significantly reduces the risk of developing Alzheimer’s disease – the most common form of dementia. And regular annual vaccinations provide even better protection.

For the study, scientists selected almost two million patients: 935,887 pairs of people who were vaccinated against influenza and those who were not.

All participants in the experiment were over 65 years old (mean age 73.7 years), and this is no coincidence – dementia mainly affects older people. There were approximately equal numbers of men and women in these groups (56.9 percent of women).

For six years before the start of the study, the health of all its participants was monitored by doctors: no one had previously been found to have symptoms of dementia. The follow-up time during the study itself was 46 months nearly four years.

The researchers concluded that flu vaccination was “to blame”. It was she who reduced the risk of developing Alzheimer’s disease over the next four years by 40 percent.

It is generally accepted that any person becomes forgetful and eccentric with age. Allegedly, if the grandmother forgot how to cook or the grandfather began to confuse the names of children and grandchildren – this is completely normal.

But in fact, this is not the norm. A healthy person retains a clear mind until old age, and if problems with memory, thinking, emotions, behavior begin, these may be the first signs of senile dementia or, in the common people, “senile dementia.”

Senile dementia is not a single diagnosis, but a group of diseases with different causes. The most common form (accounting for 70 percent of all cases) is Alzheimer’s disease.

During it, pathologically altered proteins are deposited in the brain, and nerve cells lose their connection with their neighbors and die.

According to experts from the World Health Organization, there are now 55 million people with dementia in the world, and about 10 million new cases are diagnosed annually.

Many of these people become disabled – to the point that they lose the ability to serve themselves. They need constant care, and this burden falls on the next of kin.

Alzheimer’s disease is a chronic and progressive disease. Changes in the nervous system and symptoms only increase over time.

Doctors can only prescribe drugs to slow down the progression of the disease and improve the patient’s condition, but a cure at this stage in the development of medical science, alas, is impossible.

This is why the issue of prevention is so acute: modern research shows that many cases of Alzheimer’s disease can be prevented.

This helps, first of all, regular mental activity (even the habit of solving crossword puzzles will be useful here), as well as playing sports. Now, judging by the results of the study, it is safe to add influenza vaccination to effective methods of prevention.

Of course, no one calls for vaccinations specifically to preserve mental clarity. This is just a bonus to protection against the virus, but it can be very useful for those who have passed the milestone of the 65th anniversary.

By the way, the scientific work of American scientists was not the first evidence that influenza vaccination reduces the risk of Alzheimer’s disease.

Back in 2001, the results of a study involving more than four thousand patients over 65 were published. It showed that people who had previously been vaccinated against diphtheria, tetanus, polio and influenza were less likely to develop Alzheimer’s disease.

The benefit of the current study is that it is much larger, and that it confirms previous findings, suggests that the flu vaccine does indeed work for more than just the virus.

How do vaccinations reduce the risk of Alzheimer’s disease?

The results of a study involving almost two million patients are strong evidence. But it’s important to understand how it works. Why does flu vaccination help prevent Alzheimer’s, and what happens to the cells and molecules in the brain? On this score, scientists have three hypotheses.

Influenza belongs to the group of SARS – acute respiratory viral infections. But in fact, during illness, the virus enters the bloodstream and affects almost the entire body.

Regardless of whether it manages to penetrate the nervous system, it often causes neuropsychiatric disorders: headache, encephalopathy (damage and death of nerve cells), damage to the sheaths of nerve fibers, depression, and memory disorders.

It is believed that these manifestations occur due to a malfunction of the immune system, and such complications are most dangerous for people over 65 years of age.

When scientists previously conducted experiments on mice, they found that influenza in the brain of rodents causes changes very similar to the symptoms of Alzheimer’s disease.

But studies involving people have not confirmed this: those who often and severely had the flu were more likely not to develop dementia.

But what’s really interesting is the similarity between the epitopes (sites that the immune system recognizes) of influenza virus proteins and beta-amyloid, an abnormal protein that accumulates in the brain in the form of plaques during Alzheimer’s disease. Perhaps it is this similarity that underlies the impact of vaccination on the risk of dementia.

Innate immunity is the oldest defense system in the human body. It is the first to react to infection, giving the second link of the immune system – adaptive – time to recognize the pathogen and develop antibodies.

But innate immunity itself is not very picky and can harm the body. For example, there is evidence that disruptions in its functioning contribute to the development of Alzheimer’s disease. 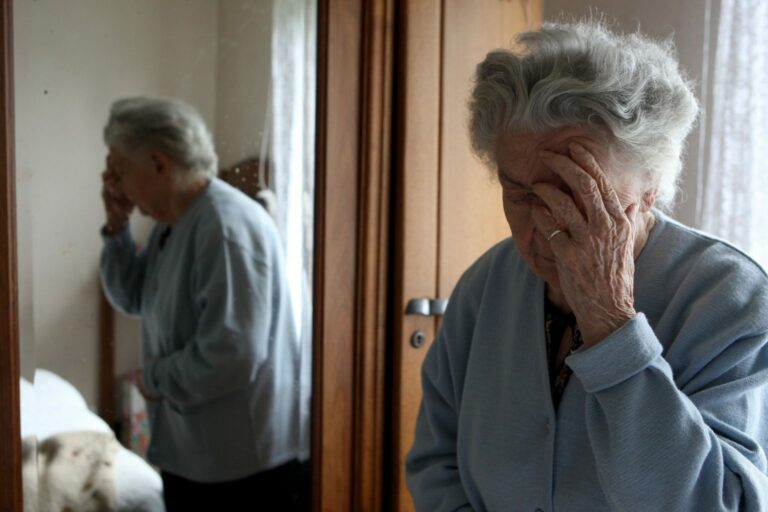 The flu vaccine probably corrects some of this problem. Vaccination affects the production of cytokines (inflammatory molecules) by immune cells and affects the functioning of their receptors.

This is mainly due to epigenetic changes – those that do not change the structure of genes, but change their work. For example, a special methyl group can join a certain section of DNA and change the way genes work, or the histone proteins connected to DNA in chromosomes change.

As a result, the work of the cell changes, and the innate immunity becomes less aggressive towards “their own”. Such reprogrammed cells are called “trained immunity”. They produce fewer inflammatory cytokines these molecules typically accumulate in the brain and other organs of older people, causing chronic inflammation.

Some studies have shown that the flu vaccine can also affect the brain’s own immune cells, microglia. As a result, these cells begin to more effectively clear the nervous tissue of the abnormal beta-amyloid protein associated with Alzheimer’s disease.

Modern scientists are getting more and more evidence that other vaccines for adults (against tetanus, diphtheria, herpes zoster, tuberculosis) also somehow affect innate immunity and reduce the risk of Alzheimer’s disease.

Adaptive immunity is that part of the immune system that specifically recognizes each foreign agent and produces antibodies against it. It is at the expense of it that all vaccines work. And there is an interesting phenomenon here.

After an infection or vaccination, so-called immune memory cells remain in the human body. Each such cell stores information about a specific bacterium or virus and immediately recognizes the pathogen upon re-encounter.

Studies have shown that memory cells are often able to recognize not only “their” pathogen, but also completely different, unrelated ones.

This phenomenon is called heterologous adaptive immunity and is not uncommon after vaccination. Scientists believe that heterologous immunity following influenza immunization may play a role in the prevention of Alzheimer’s disease.