(ORDO NEWS) — A paleontologist, pathologist and orthopedic surgeon enter the museum. No, this is not the beginning of an anecdote, but the research team that first diagnosed a case of aggressive bone cancer in a dinosaur.

This is the fossilized shin bone of Centrosaurus apertus, a horned plant-eating dinosaur that lived and died approximately 76 million years ago.

What at first glance looked like a poorly healed fracture turned out to be a tumor covering the upper half of the shin or fibula of the animal. Osteosarcoma was diagnosed in centrosaurus; it is the most common type of bone cancer in humans, but also the first confirmed case of any malignant cancer that we have found in dinosaurs.

“Here we are demonstrating the unmistakable sign of progressive bone cancer in a 76 million-year-old horned dinosaur – the first of its kind,” said pathologist Mark Crowther. 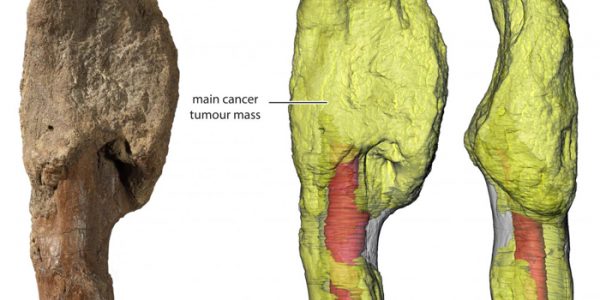 In humans, osteosarcomas often affect fast-growing adolescents and young adults. If an osteosarcoma metastasizes – extends beyond the bone – it most often spreads to the lungs, but it can also form tumors in other bones and even in the brain.

As curious as we are about the development of diseases such as cancer, soft tissues such as tendons, ligaments, bone marrow, and tumors are rarely preserved in fossils. In a few years – not to mention a million – these tissues will decompose. So even if dinosaurs regularly had cancer, it would be difficult to find any diagnostic specimens.

Cancer-stricken, fossilized centrosaurus tibia was discovered back in 1989 and was kept in the Royal Tyrrell Museum of Paleontology until recently analyzed.

Cross sections of the centrosaurus bone were made using computed tomography, the same device used to detect bone fractures and tumors in humans. The “slices” of the X-rays have been reconstructed so that scientists can see how the tumor grows through the fossilized bone.

In fact, it spread quite widely on the bones, which the medical team took it as a sign that this centrosaurus had lived with its cancer for quite some time.

Brushing your teeth immediately after eating is dangerous: the dentist explained why it is bad

A previously unknown island was discovered near the South Pole

Brushing your teeth immediately after eating is dangerous: the dentist explained why it is bad

A previously unknown island was discovered near the South Pole