(ORDO NEWS) — One of the most serious threats to biodiversity is invasive species, that is, animals and plants that have settled outside their natural ranges. One of these species was the aquarium goldfish, which settles in the waters of Canada and displaces local fish.

Biological invasions, that is, the dispersal of plants, animals and other creatures beyond their original distribution area, is a big problem for many ecosystems around the world. Hogweed in Russia, rabbits in Australia, and earthworms in North America are just a few examples of dangerous infestations .

A new threat to Canada’s waters has turned out to be such seemingly safe and even fragile creatures as goldfish. Initially, these animals lived in the east of Asia, but then they were domesticated and became an ornament, first, decorative ponds, and then aquariums.

Centuries of breeding have allowed people to create many beautiful and diverse breeds of these fish. The trouble is that sometimes captive goldfish can get into natural water bodies, begin to breed in them and upset the balance of ecosystems.

Goldfish have one unusual property: they continue to grow throughout their lives and, in the right conditions, can become very large. This usually does not happen in aquariums. If the container is small, the goldfish is under constant stress, which slows down its growth.

Moreover, these fish are able to secrete growth-regulating hormones into the environment – both themselves and other representatives of the same species. Evolution has created this mechanism to adjust the size of the fish depending on how much resources are available to them in a particular water body.

In this regard, ponds located in Canada, in which rainwater is collected, turned out to be a comfortable place for goldfish to live.

As a result, decorative and aquarium creatures grow very large (up to 30 centimeters, or even more) and eat so much that they look frightening. But most importantly, they have become a serious threat to Canada’s natural ecosystems, as they are crowding out native fish. 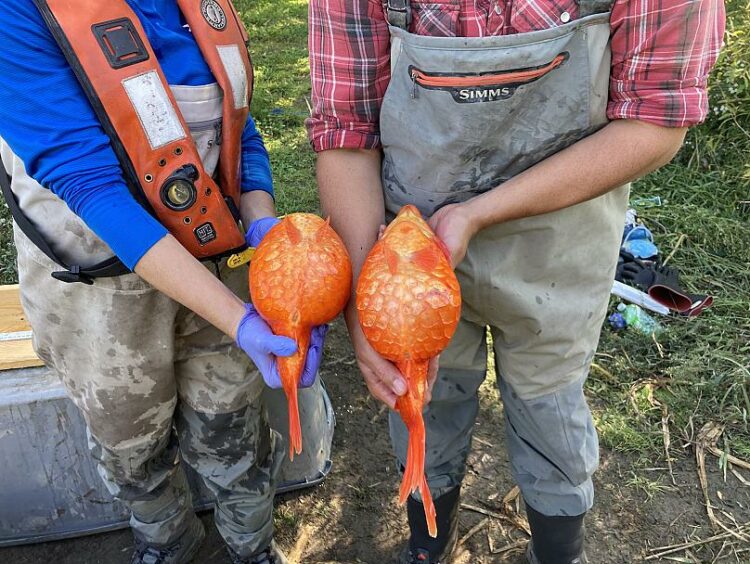 To understand the spread of this alien species, Canadian researchers tracked the movements of goldfish using acoustic tags for several months. These are tiny devices that scientists attached to the stomachs of fish and then tracked their sound signals.

As a result, Professor Nick Mandrak (Nick Mandrak) from the University of Toronto at Scarborough (Canada) came to the conclusion that in the ponds outside of Ontario lives no less than 20,000 goldfish.

“The conditions in these ponds are really extreme,” says Mandrak, “not only are they shallow, they also have extremely little oxygen, and the water temperature can rise to 30 degrees Celsius in summer.”

Goldfish had the ability to survive in such difficult conditions back in their homeland, in East Asia. In Canada, it is unlikely that anyone else is capable of this, so in specific conditions this species thrives – everything else, goldfish breed very quickly.

Scientists fear that ongoing climate change could reduce oxygen levels in Canadian waters. Then the local fish species will not be in the most advantageous position, because they are not adapted to such hypoxia. And goldfish in this case will be able to more actively displace the natural ichthyofauna.

In fact, everything is even worse than it seems, because goldfish get along in the same reservoirs with blue-green algae – cyanobacteria that cause water to bloom and release dangerous toxins into it.

Moreover, this species of fish even seems to promote the reproduction of blue-greens. An additional reason for concern was the habit of voracious aquarium fish to destroy aquatic vegetation and raise silt from the bottom while searching for food.