(ORDO NEWS) — Saber-toothed cats are usually depicted with bared fangs. However, Spanish scientists found that some of them did not have fangs visible.

The researchers studied the structure of the Homotherian skull and reconstructed soft tissues based on the anatomy of modern big cats.

It turned out that the fangs of this saber-toothed cat were hidden by the lower lips. In an article published in the journal Quaternary Science Reviews, the authors note that another genus of saber-toothed cats, Smilodon, did have its fangs bared.

Homotherium (genus Homotherium) appeared in Africa about 4-5 million years ago, and then gradually populated Eurasia, North and South America.

The last populations of these saber-toothed cats became extinct only a few tens of thousands of years ago. They differed from their relatives in their long forelimbs. Homotheres reached the size of modern lions and, apparently, preyed on large herbivorous animals, such as young mammoths. 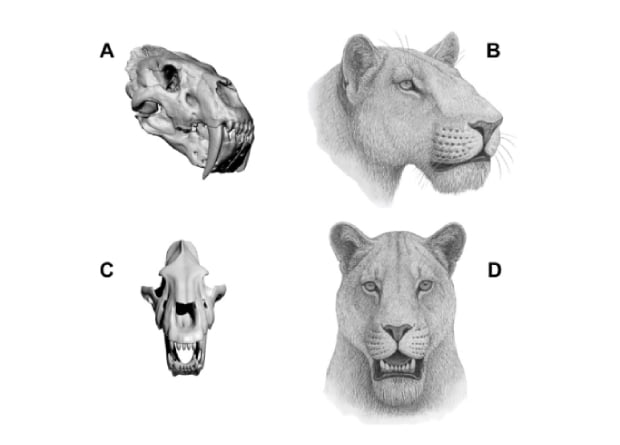 Reconstruction of Homotherium with hidden fangs

The Czech biologist Vratislav Mazak published an article in 1970 on a Paleolithic figurine of a large cat from the Isturitz Cave in France.

The scientist suggested that the ancient man depicted Homotherium, and not a cave lion, as previously thought.

The researcher explained the lack of fangs in the figurine by the fact that they were hidden by the lips of Homotherium. But later studies have refuted this assumption. 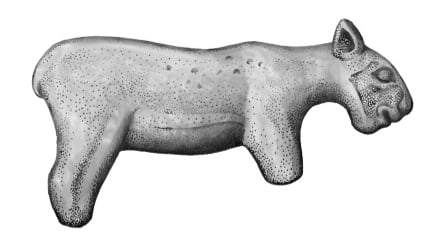 Figurine from the Isturitz Cave

Again, Spanish paleontologists, together with Mauricio Antón, one of the most famous paleoartists, returned to this idea.

Scientists have studied the skull of Homotherium from the Late Pliocene locality Perrier (Perrier) in France, including using computed tomography. To better understand soft tissue anatomy, the researchers observed large modern felines such as lions, leopards, and tigers in the wild, and performed autopsies on the head of a tiger.

Given the similarity in size, paleontologists have suggested that the thickness of the soft tissues in Homotherium and tiger was about the same.

There was too little room for soft tissue between the fangs and the lower jaw of Homotherium, so the researchers concluded that the lower lips, like a sheath, hid the fangs when the mouth was closed.

Paleontologists have also studied the structure of the Smilodon skull. It turned out that the distance between the third incisor and the canine, as well as between the canine and the lower jaw, was greater than that of Homotherium.

In addition, the lower jaw in the symphysis region of Smilodon was narrower. All this indicates that the fangs of Smilodon protruded beyond the lips.

The results obtained confirm Mazak’s assumption about fangs, however, the authors note that the figurine from the Isturitz cave still cannot be considered with certainty as an image of Homotherium due to other proportions.

A few years ago, scientists isolated DNA from subfossil remains of Homotheres, sequenced it, and concluded that the two species of Homotheres, H. latidens and H. serum, were in fact the same species.